About 1,000 Icelanders recently took a 2 hour hike to a spot in western Iceland to mourn the loss of a loved one. It was not unexpected but it is always a shock when something as big and impressive as a glacier is gone. At one time this glacier was more than 160 feet thick and covered about 6 square miles. Its name was Okjokull, or “Ok” glacier for short and it is no more.

The group went to where it had been and installed this plaque on a large boulder there [Photo: STR, EPA-EFE]. It states in part, in both Icelandic and English: “... In the next 200 years all our glaciers are expected to follow the same path. This monument is to acknowledge that we know what is happening and what needs to be done. Only you know if we did it. August 2019 415 ppm CO2.” 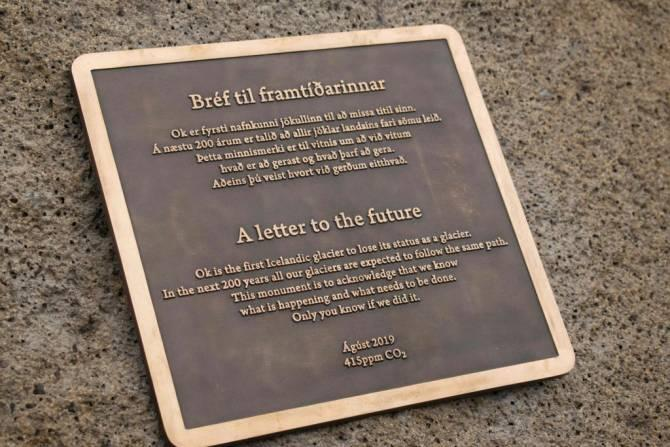 The Icelandic Prime Minister Katrin Jakobsdottir also stated at the time, “We see the consequences of the climate crises. We have no time to lose.” She also stated, “As the prime minister of Iceland, I am determined that my government will play its part. We are currently executing Iceland’s first fully funded action plan, aiming at carbon neutrality by 2040 at the latest.” [Quote: NYTimes August 18, 2019].

Another Icelandic resident said, “Memorials are not for the dead, they are for the living. ... [W]we want to underscore that it is up to us, the living, to collectively respond to the rapid loss of glaciers and the ongoing impacts of climate change.”

Glaciers cover more than 10% of this island and every one of them is melting. Water is heavy as is ice. The weight of all of that ice presses down on the land and causes it to sink. This melting of ice and resulting weight loss on the land, has consequences on businesses, on people and on communities too.

Adalsteinn Ingolfsson, the chief executive of a fishing operation in Hofn, Iceland, has watched the massive Vatnajokull glacier shrink year after year, [NYTimes August 12, 2019]. “The glacier is melting somuch that the land is rising from the sea. It is harder to get our biggest trawlers in and out of the harbor.” In addition, rising ocean water temperatures has changed the species being caught as well as the quantities.

These changes are real. Global temperatures are rising and are due to the combustion of enormous quantities of fossil fuels, and the greenhouse gas, carbon dioxide, produced. That means it is us.

Let’s just take a few minutes to debunk “it’s the sun” myth as the reason for our warming. 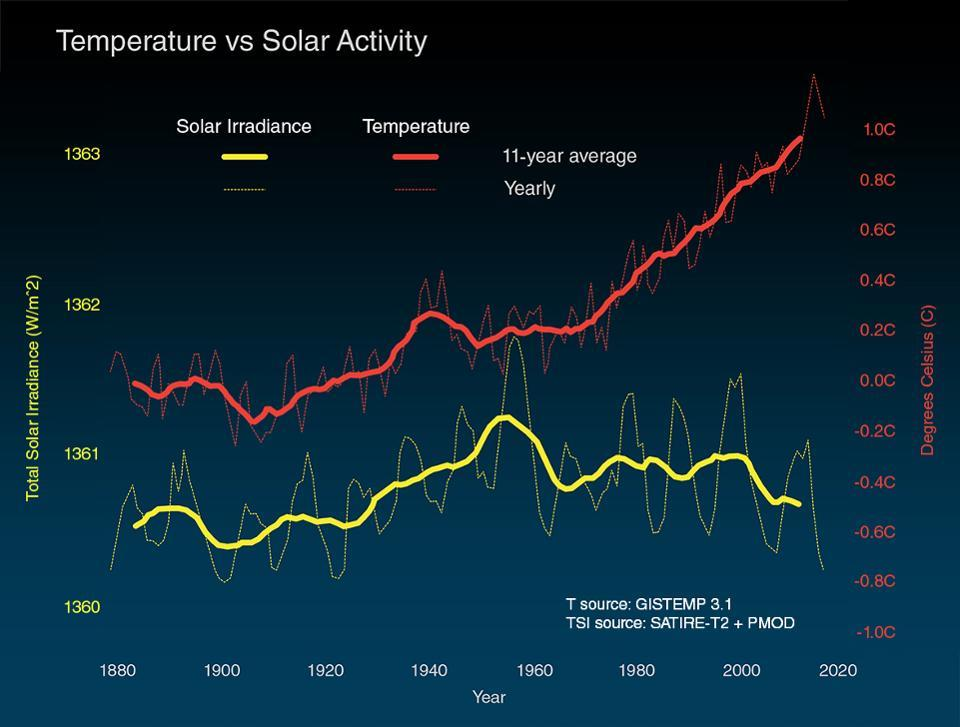 See the graph from NASA [National Aeronautical and Space Administration] labeled, “Temperature vs Solar Activity.” It does have a lot of information on it, but be patient, the story it tells is quite straight forward and clear.

There are three lines included and let’s start with the bold line moving from left to right at the bottom. It shows the total amount of solar energy, called irradiance, from 1880 to present, that is striking the Earth. This line does show some small variation up and down during this time period.

Now look at the upper line in this graph. This line shows Earth’s temperature and it is steadily rising, especially since the 1960’s, regardless of the sunspot number and the 11 year sunspot cycle. The take-away message is that variation in Sun energy output is NOT causing the warming of Earth that we are experiencing now.

So what can a person do? How can YOU make a difference?

One choice one can make is to eat less Beef. See the bar chart showing the “Pounds CO2e [equivalent] per serving” as it relates to a variety of food choices. Beef has the largest contribution to CO2 emissions compared to any of the other foods listed; and by a wide margin. 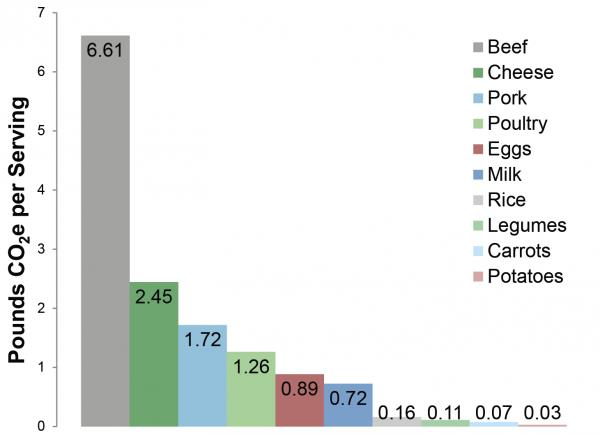 These data are from the Center for Sustainable Systems at the University of Michigan website.

September looks to be a very busy month for climate activists. The Great Climate Walkout on September 20 is one and most will be led by students. In addition, the United Nations has a series of climate relatedmeetings during the week of September 20 to 27. Greta Thunberg, the 16 year old Swedish climate activist, will speak at one of these and elsewhere at that time.

The photo [inews.co.uk] of a young student is from one of the student led marches/protests earlier this spring and her sign says everything.