Cherry picking does not necessarily mean going to an orchard and doing just that. However, Climate Science and its research data seem to be ripe for the same process. One definition of “cherry picking” is to highlight or extract “data that seem to confirm a particular position, while ignoring a significant portion” of data that might contradict a point of view.

Let’s look at the 42 year global air temperature graph labeled “How ‘Skeptics’ View Global Warming.” One could draw a line, and some have, using small segments of 8, 10, or 12 years worth of data and get a straight or even a downward sloping line as illustrated here. This approach could allow one to say that global warming has stopped or even that cooling has occurred.

However, let’s look at the chart with exactly the same data labeled “How Realists View Global Warming.” Scientists generally agree that it is best to use at least 30 years worth of data, if the data is available, when trying to interpret what is under study to find the long-term signal. It’s pretty clear from this second graph that our planet is still warming when all of the data over the past 42 years is taken into account. 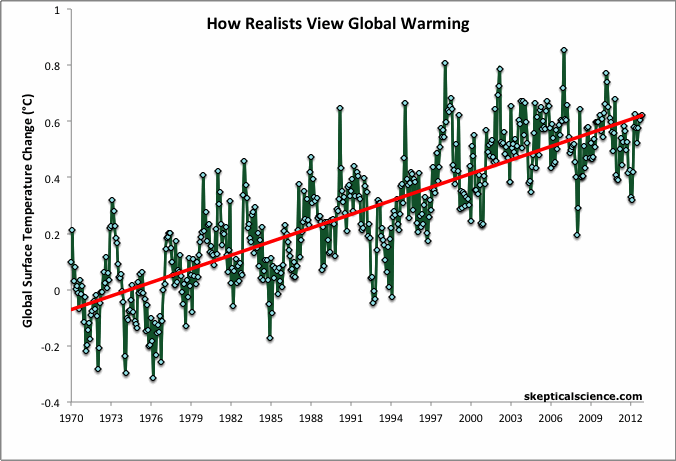 Greenhouse gases don’t take a vacation and just stop doing what the physics requires of them: they
continuously absorb infrared energy and return it to Earth’s planetary systems. So where has some of
this heat energy gone? If not increasing surface atmosphere or air temperatures, then where?

The answer appears to be in the oceans. We have to remember that oceans cover about 70% of the
planet to an average depth of about 10,000 feet. Our atmosphere with this extra energy, or heat,
continually passes over this water surface and releases this energy to the cooler water. According to the
second law of thermodynamics heat energy always flows from regions of high temperature to regions of
cold temperatures; never the reverse.

In a recent 2013 peer-reviewed paper in Nature Climate Change, by Guemas et al, the authors conclude that a slowdown of global surface air temperature increases is a result of this extra greenhouse energy going into an unprecedented warming of the oceans. This heat accumulation in the oceans is the most
sustained in the past 50 years.

The chart [Where Global Warming is Going] illustrates that the energy is going into the oceans with smaller amounts going into the atmosphere, the continents, and the melting of ice in Earth’s ice sheets and glaciers. 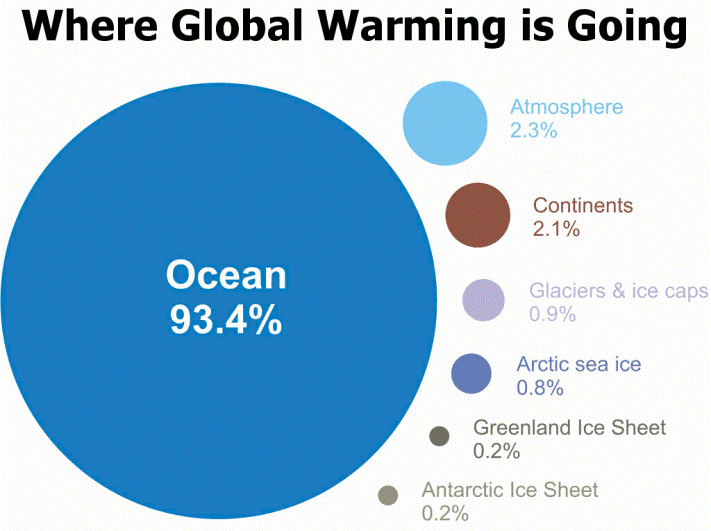 And when it is said that this energy is going into the oceans, it means the “deep” ocean.

The three curves in the graph labeled with the bold letters “ORAS4 OHC” depict this energy transfer into
the ocean. The rising curves over the past 40 years reflect this increased energy content. The top curve
is Total Depth, followed by the curves for Upper 700 meters and Upper 300 meters. This “missing heat”
peer-reviewed paper was reported in Geophysical Research Letters by Balmaseda et al. [2013]. 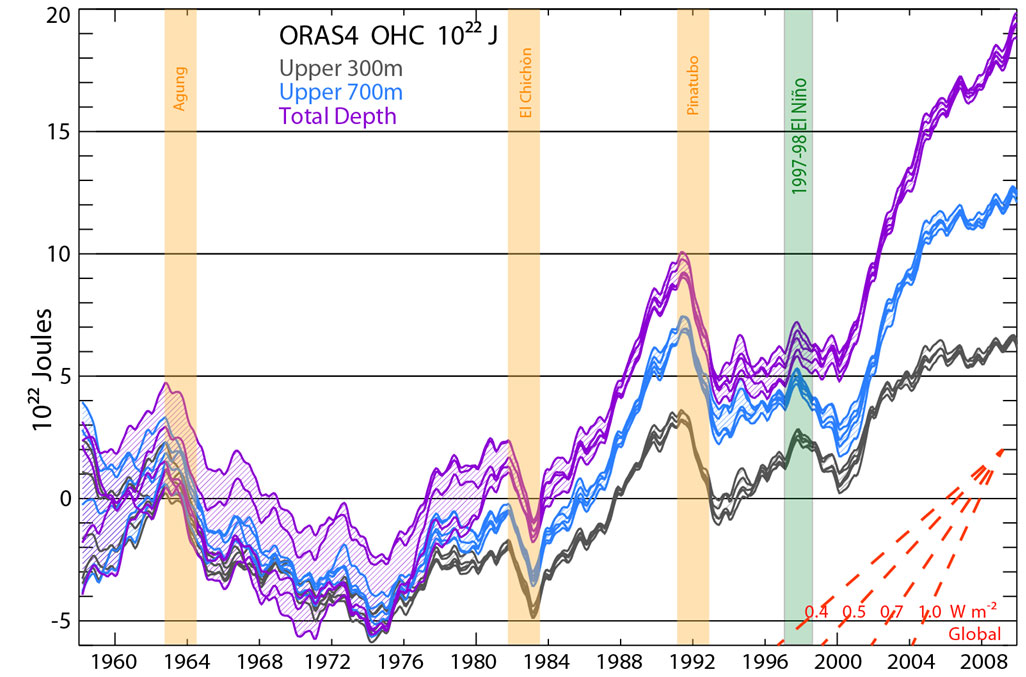 Recently, two interviews were published that highlight and give some insight into changes in the way people are beginning to think and take action with regards to climate change.

The first was with R. Rex Parris, the Republican mayor of Lancaster, CA, a strong supporter of solar power and aware of the risks associated with climate change. In an interview with the New York Times [April 2013] he said climate change is “absolutely” a threat and that “I may be a Republican. I’m not an idiot.”

Ursula Sladek was a school teacher in Germany and is a mother of five children. When radiation from the Chernobyl nuclear disaster settled on her village she became an activist. She now runs the local electrical utility which has foregone nuclear and become one of the largest suppliers [130,000 households] of green energy in Germany.

In 2011 she was awarded the prestigious Goldman Environmental Prize for her efforts. In a recent interview she stated with a smile, “Ask not what your energy supplier can do for you, ask what you can do for the Energiewende” [renewable energy revolution].