Menu
You are here: Articles2022 ICSUSA ARTICLESJuly 2022 - It’s All About Time, Do We Need a New Name for Earth’s Condition Today?

It’s All About Time, Do We Need a New Name for Earth’s Condition Today?

Most of us are aware that glaciers covered the North Country in the past. Ice core and other data suggest that there were at least 8 episodes of glaciers from one to two miles thick covering our region. With this enormous weight our landscape, in this place we call home, changed in many ways. This Epoch, called the Pleistocene, ended about 11,800 years ago [11.8Ka] with the last glacial retreat. Note the chart labeled “Period | Epoch” by Jonathan Hendricks.

The Holocene, which began about 11,800 years ago at the end of the Pleistocene, is the current geological epoch we live in today, as defined by the International Commission on Stratigraphy. According to Wikipedia, the Holocene is the most recent Epoch and corresponds to “the rapid proliferation, growth and impacts of the human species worldwide, including all of its written history, technological revolutions, development of major civilizations.”
And now, according to some scholars, a new third division within the Quaternary, the Anthropocene, has begun. It is the present time “in which many geological significant conditions and processes have been profoundly altered by human activities,” [Holocene, Wikipedia]. Indeed, a free, new Weekly Science Dispatch, titled “Anthropocene Magazine” is being published.
In 2016, the Anthropocene Working Group consisting of several dozen geoscientists, settled on the early 1950’s as the starting point for this new Epoch. They are noting spikes in plutonium from nuclear tests, microplastics everywhere including at the poles and in our bodies, ash particles from uncheckedindustrial emissions, greenhouse gases accumulating in the atmosphere at levels not seen in millions of years, and more. It will be some time before enough data are collected to convince a broader body of scientists that a new Epoch should be considered.
Indeed, recently several extreme weather events have taken place that are just remarkable: floods in and around Sydney, Australia where they received a year’s worth of rain in 3 days [over 31 inches]; severe drought in the US west resulting in the Great Salt Lake losing over 2,300 square miles of surface area since the 1980’s with less than 1000 square miles remaining and areas in eastern Pakistan withtemperatures above 120 degrees F for extended periods making the area almost uninhabitable, and more.
Thus, there is a clear sense to many that we have entered a new Epoch with global problems requiring global solutions; resource depletion, population growth and climate change caused by greenhouse gases from the combustion of fossil fuels.
And now the Russian invasion of Ukraine is the newest serious geo-political situation which demonstrates that our addiction to fossil fuels is troublesome. It gives economic leverage to one nation [Russia] over others, [ Europe], whose economies consume large amounts of it.
There is now a plan in the EU [European Union] to end dependence on Russian fossil fuels [gas and oil] within just a few years. At a meeting in Brussels in mid-May, 2022 a European plan was presented to ensure a secure energy supply, named REPowerEU, so that by 2027 all Russian energy supplies will be phased out.
This could be a big win for the environment and the fight against climate change.
See Illustration [Adobe Stock/Rawf8] of a gas pipeline with a knot in it preventing Russia’s gas supplies from entering the EU. 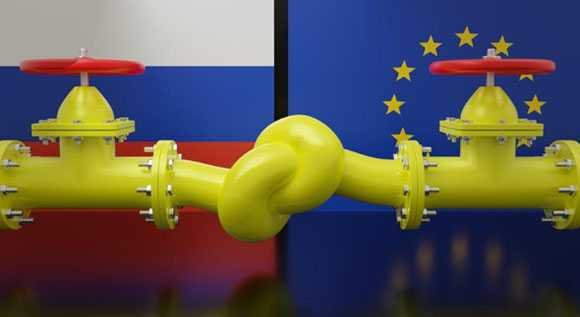 This plan towards EU energy independence has several components. It will involve speeding up the expansion of wind energy in the North Sea by at least 65 gigawatts [GW] by 2030, a four-fold increase over today’s generation capacity, and a ten-fold increase to 150 gigawatts by 2050.
This would be coupled with energy efficiency programs for homes and businesses, energy-efficient retrofitting of buildings, and require that by 2024 new construction have renewable energy meet at least 65% of new heating systems. Under the new rules solar panels on rooftops will be the norm.
The five year cost is estimated to be about $215 billion, which is less than the EU currently spends on Russian energy.
Wind power installations in the shallow waters of the North Sea offer tremendous opportunities. Capturing the energy in the wind and with newer technology, the new 14 megawatt turbines can power a home for two days with a single rotation of its blades! It is literally a monster standing about 800 feet above the ocean surface.

See image of a wind farm in the North Sea courtesy of Mercom India. This is a typical grouping of turbines spaced together for ease of servicing and collection of the electricity produced to be sent ashore. 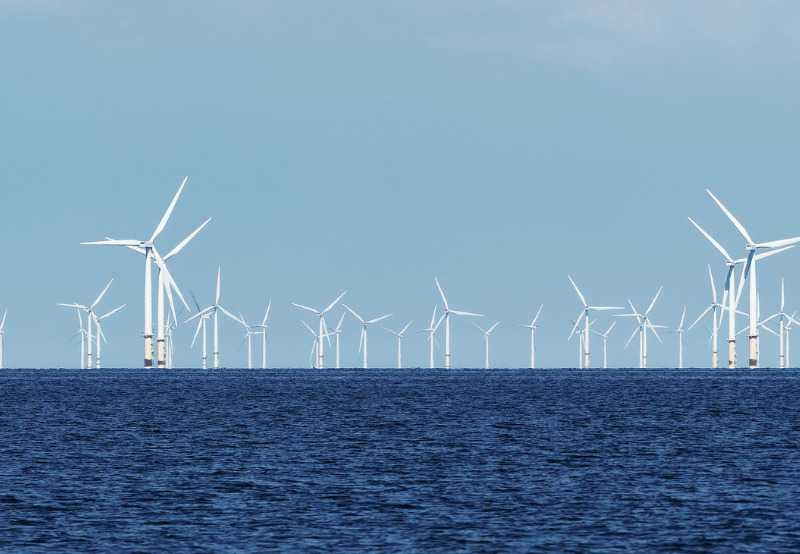 The other image of a turbine being serviced gives one the sense of size, height and safety procedures as the technicians check sensors, the gearbox and other components. 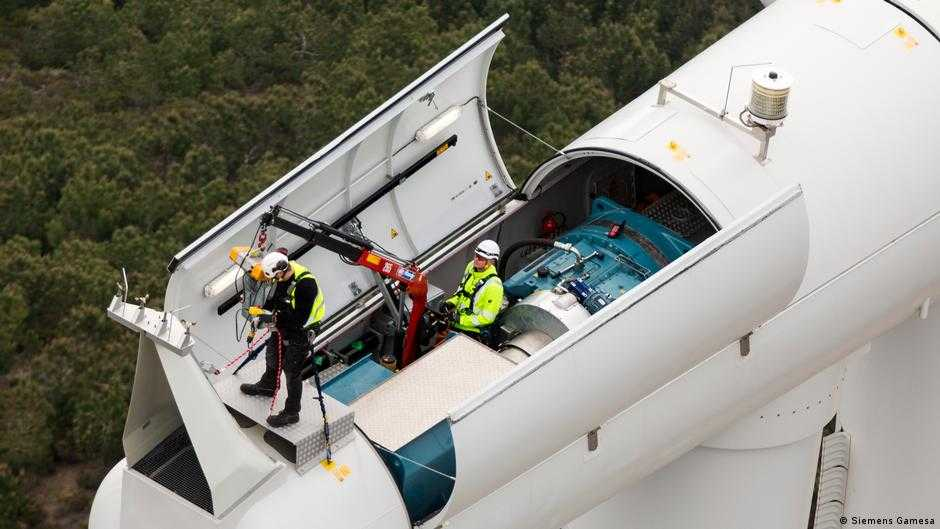 And the artist this month is Tan Zi Xi with her sculpture, titled “Plastic Ocean.” Tan cleaned over 26,000