Menu
You are here: Articles2019 ICSUSA ARTICLESJuly 2019 - Climate Change and the Irony of it all

Climate Change and the Irony of it all

Her name is Rachel Notley. She served a four year term starting May 24, 2015 as Premier of Alberta. Her policies encouraged renewables, an economy-wide carbon tax starting in 2017, a cap on emissions from the oil sands and a phasing out of coal-fired power plants. She also apologized to the Aboriginal community of Alberta for a long history of neglect.

Then the “guard dogs” combined forces and attacked.

The 2019 Alberta general election was held April 16, 2019. Jason Kenney of the United Conservative Party was elected Premier of Alberta and has made reversing climate change measures a priority of his administration. On the day he was scheduled to repeal Alberta’s carbon tax at a gas station he had to cancel.

Why? He had to attend a real-time briefing on massive wildfires, in part caused by a severe drought aggravated by climate change, that were ravaging large parts of the landscape in May. They had burned over 1 million acres. More than 10,000 people have been forced to evacuate to avoid the blazes. See satellite image, Pierre Markuse/Flickr. 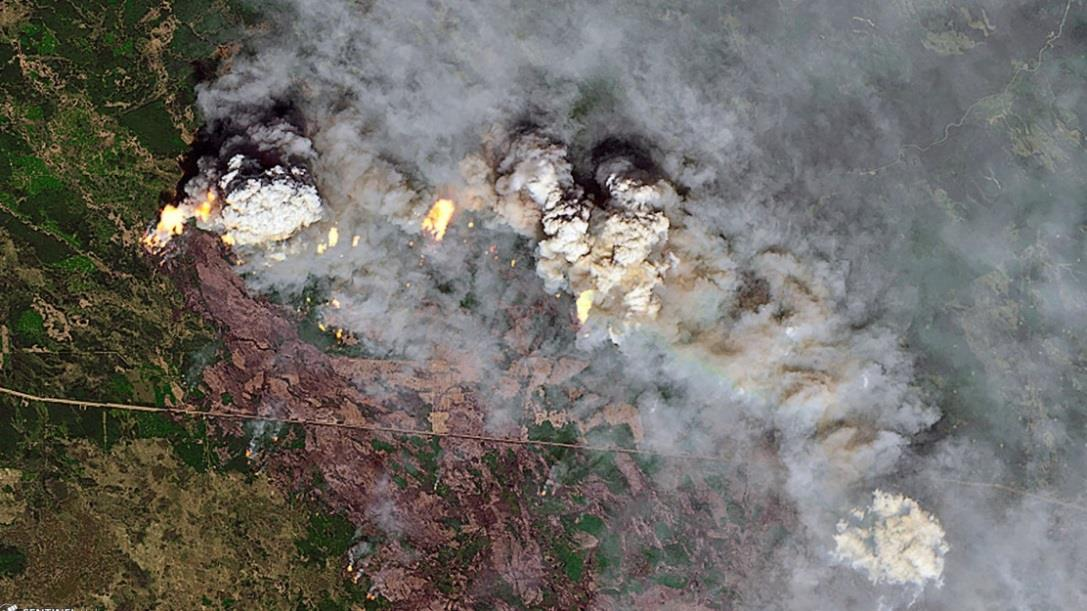 The smoke, choked skies across the province, and then spread further into eastern Canada and the northern U.S. Air quality indexes exceeded safe levels by wide margins.

Thousands of school children in the province were bused to areas of better air quality and thus missed their final exams. They would be credited with their mid-term marks as their final grade for the year.

Note the map of U.S. and Canada showing large swirls of different color intensity that stretch to Maine and the Atlantic Ocean. The map is from esri, and is dated Jun 1, 2019. The darker the color the more PM2.5 particulates in the atmosphere with a corresponding increase in associated health risks. The wildfires in Alberta, 2,000+ miles away were impacting the quality of the air we were breathing here inNYS. Rolling back climate change mitigation measures by Mr. Kenney is hurting us here in the North Country. 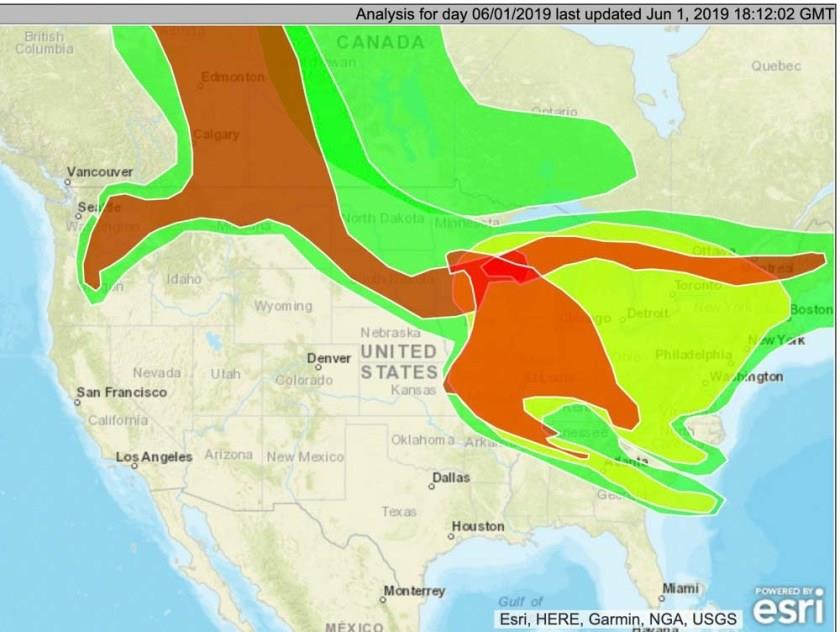 Climate change is a global issue, and all countries and peoples are impacted in some way or another, by decisions made elsewhere.

However, not all governments are shirking their responsibility. In NYS, the Senate, the Assembly and the Governor were all in agreement that climate change needed to be addressed and address it they did. In late June they passed what some call the most aggressive set of climate policies in the world! It requires net zero emissions for all sectors of state’s economy by 2050. An article in the NYTimes on 6/19/19 stated that the “Plan Sets Up New York as a Guide to the Globe.”

Let’s look at the round pie chart [PAUL HORN/InsideClimate News] labeled “New York’s Top Emitters by Sector.” The largest source of energy-related CO2 emissions is “Transportation” at 46% of the total, with “Electric power at 17%” is third largest. The chart is provided by. This is an ambitious endeavor and is consistent with the scientific recommendations of the IPCC [Intergovernmental Panel on Climate Change].

But meanwhile down on the proverbial ranch, nature is responding to the chemistry and physics of excessive emissions of CO2 in the atmosphere in its own way.

Situation #1: Greenland has had an unusual warm spell in June 2019 with temperatures as much as 40 degrees Fahrenheit above normal. This created a pulse of melting across much of the surface of the Greenland ice sheet. According to Marco Tedesco [Columbia University], this melting impacted about 45% of the ice sheet. A scientific team in Greenland went to retrieve scientific equipment where this photo here was taken on June 13, 2019 [Steffen M. Olsen/Danmarks Meteorologiske Institute].

It shows dog teams pulling sleds through an expanse of meltwater that sits on top of ice. The journalist who tweeted the photo, John Iadarola, said that “despite having a majestic quality – represents a terrifying symbol of a world that is rapidly warming.”

Situation #2: A heat wave in Europe set new high records in France and Germany. France had a high temperature of 115 degrees F. and in Germany, auto speeds had to be reduced because high temperatures were buckling pavement on the autobahn.

Situation #3: In June 2019 India experienced a heat wave [> 120 degrees F.] and a drought at the same time. The monsoons failed and 20,000 villages had a severe drinking water crisis with no water left in 30 large dams.

Situation #4: Meanwhile the United States had its wettest, ever, 12 month period in history.

Situation #5: In Guadalajara, Mexico, June 30, 2019, the city was buried under 3 feet of hail, the largest hail storm ever recorded there. 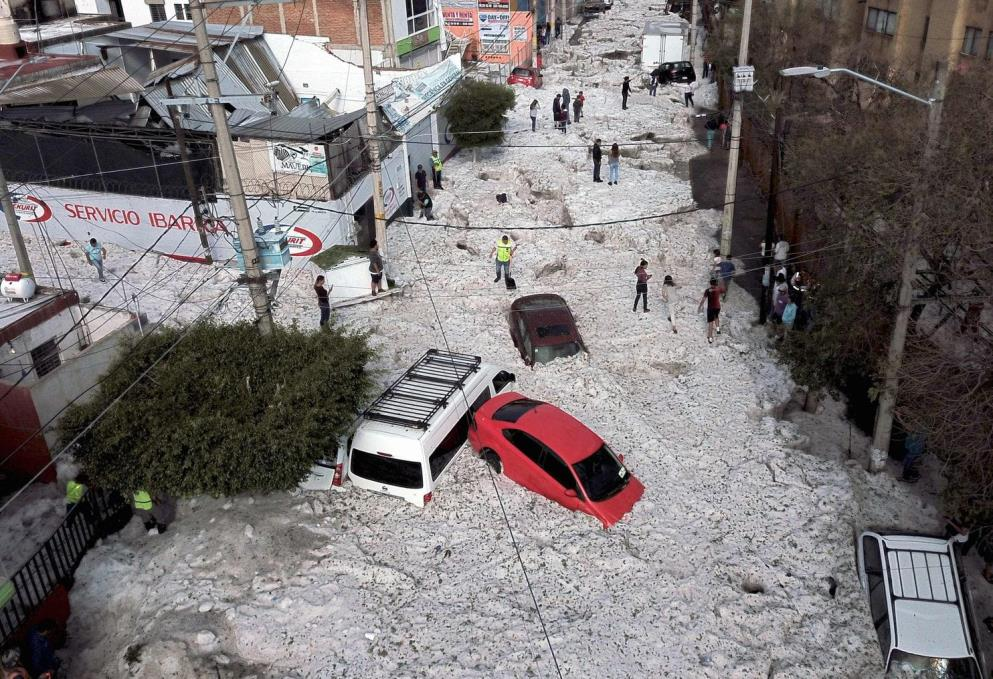 One photo is included here of a main street in that city shows cars partly buried under ice.

And there is more but not today.

This is what one would call “global weirding.”