“I think that I shall never see

A poem lovely as a tree.”

Mr. Joyce Kilmer [1886 – 1918] wrote these opening lines of his signature poem “Trees” in 1913. This and a collection of others were published shortly before his death in World War I in 1918. But he is not the only lover of trees.

The Lorax, a children’s book written by Dr. Seuss and first published in 1971, is a fable about trees, specifically “Truffala” trees and how the Lorax tries to protect them from being all cut down for profit. In several recent polls, including one in 2012, the story was named to the “Teachers’ Top 100 Books for Children.”

In addition, it is not just poets and children’s books that highlight the value of trees, but many cities embrace them as well. Savannah Georgia has been designated “Tree City USA” every year since 1983 by the National Arbor Day Foundation. It has been a conscious policy decision with the city’s citizens to plant trees in part for their beauty, shade and ability to sequester or absorb carbon dioxide [CO2] from the air.

For some time climate scientists have been studying the ability of trees to sequester carbon dioxide [CO2] and be a carbon sink. It is well known that they store carbon and play an important role in reducing the amount of this greenhouse gas [GHG] in our atmosphere, which in large part is a result of our combustion of enormous amounts of fossil fuels.

Take a look at the figure labeled “Where humanity’s CO2 comes from”, and “Where humanity’s CO2 goes.” Starting at the top left we can see that about 91% of emitted CO2 comes from the combustion of fossil fuels and cement manufacture. [Cement manufacture is extremely energy intensive.] Next is the fact that 9% comes from land use changes, which includes the loss of tropical forests and their ability to “fix” CO2.

In the bottom half of the illustration we see that about half of the emitted gas goes into the Atmosphere, 26% into Land and the remaining 24% into Oceans.

The land, with its equatorial tropical forests and the boreal forests in the higher latitudes, ‘inhale’ CO2 from the air and, together with water and other nutrients, through photosynthesis, produce the sugar type molecules that make up all wood.

The Sun’s light hits the green chlorophyll and energizes certain “Light reactions” [see illustration]; then the Calvin cycle takes that energy and converts CO2 into sugar. Oxygen is given off in the process as seen by the direction of the arrow. 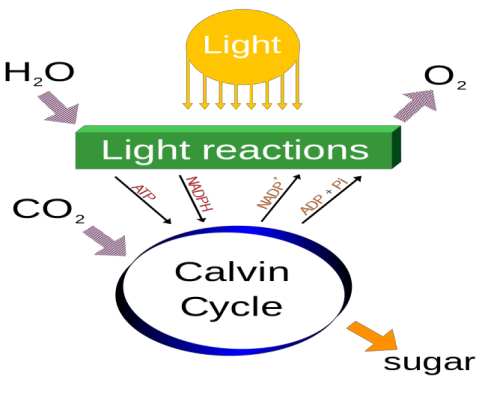 While this process has been known for a long time, it was uncertain exactly how much CO2 was “fixed” on land into sugars and the fibers that make up woody materials we find in vegetation.And boy, do these green plants have their work cut out! The table “Data for Global Carbon Emissions”,
highlights the enormous amount of CO2 that is being emitted each year and that this amount relentlessly increases [“(GtC)” Gigatonnes Carbon].

A recent publication [Proceedings of National Academy of Sciences, December 29, 2014] reports that green plants, especially in the tropics, play an even bigger role in fixing CO2 from the air and that they may sequester as much of 30% of our emissions. When you think about it they have had 350 million years of experience to do just that.

In case there is any question about trees being a carbon sink, the photo of these enormous West Coast redwoods is an awesome example and reminder.

While the numbers vary a lot depending on species, latitude, soil fertility and rainfall, it is estimated that an average sized tree can absorb about 26 pounds of carbon dioxide per year.