Black carbon (BC) or soot holds both peril and perhaps promise for Earth's climate system. The peril, of course, is that continued emissions will hasten ice melt, because of its heat-absorbing qualities, and thereby quicken global warming. The promise is if we can reduce the amount emitted soon (which is technologically and clearly possible) warming will slow significantly. Reducing BC will give world leaders time to reduce the emission of carbon dioxide, the primary greenhouse gas (GHG) of concern.

This BC subject was first discussed in the December 5 Climate Science column in the Press Republican. It can be found on the opening page of www.icsusa.org.: let's continue.

In the developing countries the major sources of BC are from open cooking and/or open heating fires, using biomass (wood, crop residues, dried dung, and so on), as can be seen in the first image. Transportation, see second image courtesy of EPA, and rapid industrialization are other major sources. 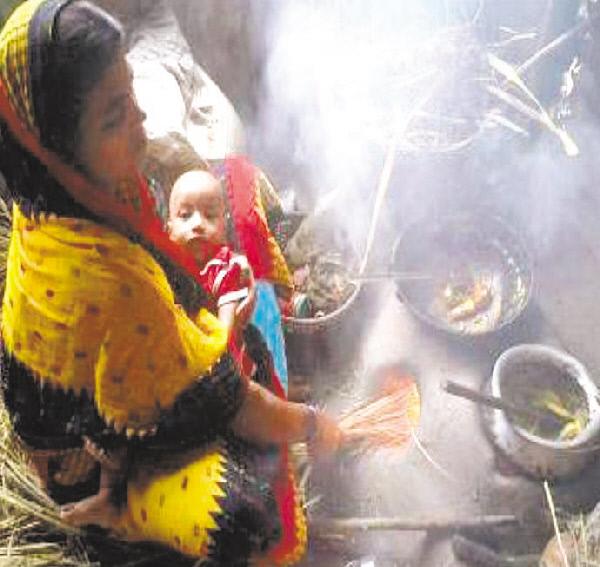 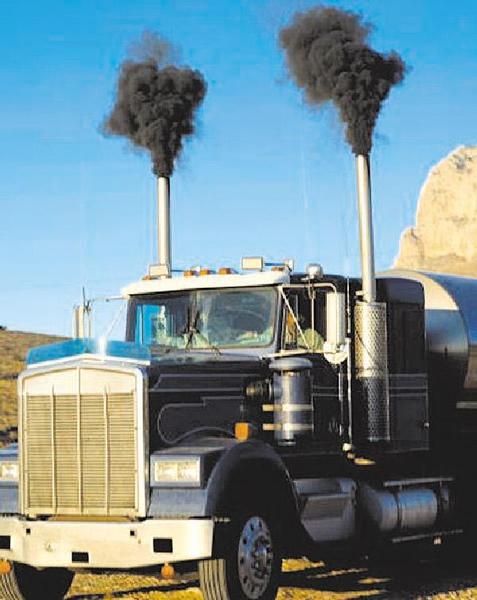 More than 2 billion people currently use biomass energy which also has its attendant negative health effects which has been noted previously. The emissions primarily arise in India and China but surrounding countries also contribute and are impacted. Both sources of energy (biomass and fossil fuels) affect climate, but let's focus on the BC from biomass emitted in Asia.

The next image is an overview of a portion of southern Asia centered on the Great Himalayan Range and the heavily populated region surrounding it. In the center one can see the Tibetan Plateau and mountain range, together with the surrounding countries from Afghanistan to the west, China to the north and east, and Southeast Asia on the lower right. 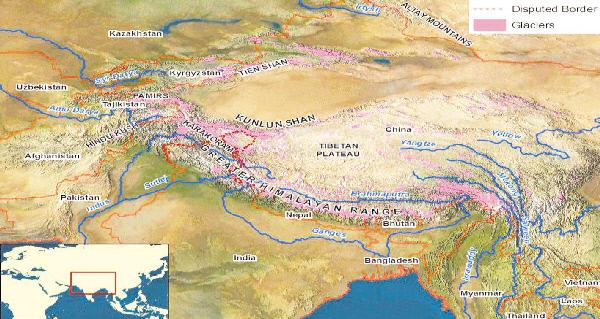 This central region is often called "The Third Pole" because of its low temperatures, extensive permafrost, and huge amount of ice and snow located on the peaks and high valleys in the region. It is estimated that there may be about 46,000 glaciers here, although there is no agreement on the exact number. The area thus holds an enormous amount of frozen water.

This Third Pole is also known as "Asia's water tower" in the same sense as the water towers we have in Plattsburgh, Chazy and elsewhere supplying us with potable water. This glacial water source is of enormous importance to people living downstream in terms of water supply and irrigation.

As a side note to this, a 17 Sep 2010 article in Science (Vol.329, p.1479), states that the entire subcontinent of India has moved 2 meters (~6 feet) north in the last 50 years diving slowly under Tibet. The resulting colossal collision and tectonic forces at work here are almost beyond comprehension and add to the complexities of what is happening in this region. The earthquakes and tremors resulting from this geological process complicate the enhanced runoff and flooding from the melting glaciers.

The next image "Domestic Emissions of Black Carbon: Year 2000" illustrates that the largest sources of BC (dark squares) are from northern India and China. The air currents and weather patterns carry this BC up into the Himalayas, where it eventually gets deposited in and on the snow and on the glaciers in the region. As has been pointed out previously, this darker snow surface now absorbs more of the sun's energy with increased melting the result.

So the stage is now set for some serious issues. We have lots of BC being emitted by densely populated areas, the prevailing air currents carry this BC up into the mountain range where it is deposited in snow and onto the ice with increased melting occurring. This melt water naturally finds its way to the major rivers in the area, and some of the many countries through which they flow, are as follows: the Ganges (India), Brahmaputra (Bangladesh), Indus (Pakistan), Irrawaddy (Myanmar), Mekong (Cambodia), Yangtze (China) and others.

Just pronouncing the names of these rivers is a wonderful experience in multi-culturalism: it certainly gets the imagination working and doesn't it also give one the travel itch?

Thus, what happens in the Himalayas has a big impact on a very large swath of Asia. This mountainous region is huge and is about 2/3 the size of the U.S. or about 2,000,000 square miles. According to an 11 Nov 2010 article in Nature (Vol.468, p.141), an international program led by the Chinese Academy of Sciences held its second workshop in October 2010 in Tibet (Kathmandu). The intent is to try to understand how climate change is unfolding in this Third Pole environment and its implications.

Particularly telling is data obtained by Chinese researchers. Using data from satellites and ground measurements, some 24,300 glaciers were studied. The scientists found that the total surface area of glaciers has decreased 17% in the last 30 years; many have even disappeared. But of even greater importance than area is ice volume. These measurement efforts are a challenging task and these arduous studies at 15,000 feet and more show that "the impact of climate change on some Himalayan glaciers is much worse than previously thought," advises Tian Lide a glaciologist associated with the Third Pole Environment program.

The melting is a combination of both increased atmospheric temperatures and the presence of BC on the snow and ice surfaces. With about 1.4 billion people dependent on water from these rivers, a loss of ice could impact downstream water availability and food security in the coming decades. This is discussed in an 11 Jun 2010 article in Science (Vol.328, p.1382). The impacts will probably be different for different river basins and the full extent of changes are not yet known.

The Director of the Tibet Autonomous Region (TAR) Meteorological Bureau, Song Shanchong, confirmed in 2007 that changes are taking place due to climate change. He noted that "the rising of the snowline, the retreat of glaciers, the northward movement of permafrost, the loss of grassland, the eastward spread of desertification and the loss of biodiversity," will all have an impact on Tibet's ecological systems. See website "Tibet: The World's 'Third Pole'" for more information.

Xinhua, China's state-run news agency, reported on research by scientists from the Institute of Mountain Hazards and Environment at the Chinese Academy of Sciences, who found that the Tibetan wetlands that feed the Yangtze River have decreased about 29%. This is thought to be a result of increased evaporation caused by global warming even though there has been increased rainfall in the region.

Another aspect being studied, involves the larger glacial lakes that are being formed as a result of the increased ice melt. These larger lakes frequently flood areas downstream because of weak natural dams that are prone to failure because of the earthquakes in this region from the collision and subduction of India under Tibet.

The promise here is the recognition by the authorities that climate change is happening and environmental impacts are occurring. This is the first step in a process for policy makers to hopefully make changes to minimize the reasons for climate change and its impact. The recent initiative by the U.S. and the United Nations to make solar cookers and more efficient biomass cooking stoves available in this region, to reduce BC pollution, is another positive step forward.