Menu
You are here: Articles2015 ICSUSA ARTICLESApril 2015 - The Arctic: Still Revealing Its Mystery

The Arctic: Still Revealing Its Mysteries

“There are strange things done in the midnight sun

By the men who moil for gold;

The Arctic trails have their secret tales

That would make your blood run cold;”

These lines are from a poem by Robert Service, “The Cremation of Sam McGee”, and were written more than a century ago during the gold rush era in the Yukon. The Arctic, the northern most regions of Earth,
still has secrets today and often gives one glimpses in unexpected ways.

A plane flying over the tundra in the Siberian Arctic first noted the appearance of what appeared to be a freshly excavated circle, or crater, in the summer of 2014. Then two more were found. [See map from
the Daily Mail]. They were deep pits, filled with water and their appearance surprised many scientists. 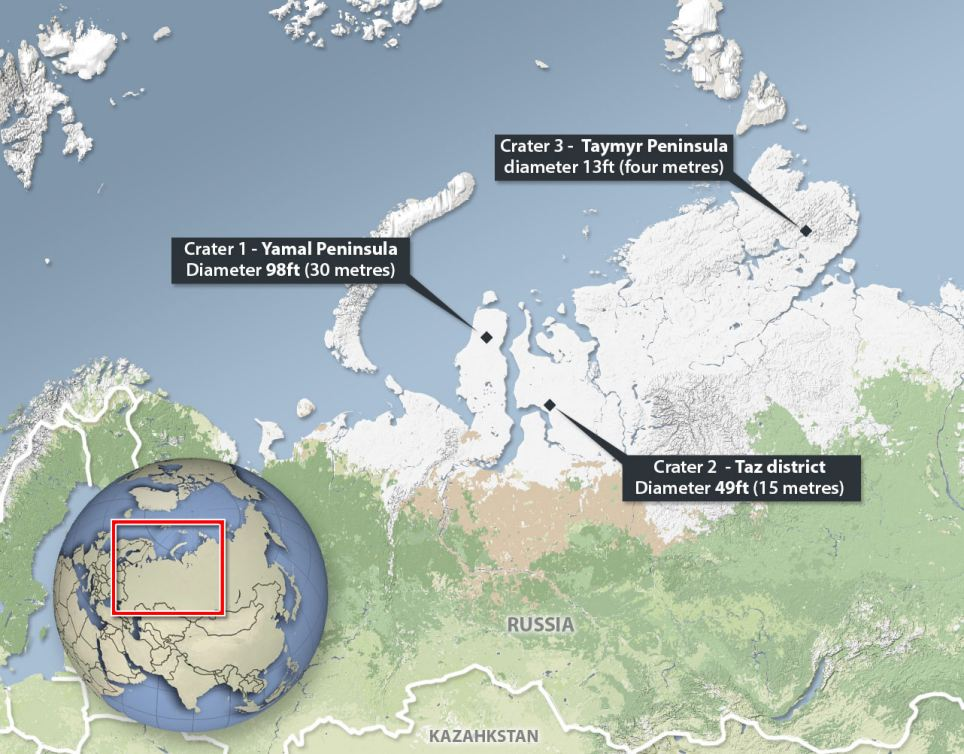 The photo here shows Russian scientists investigating this new feature and standing near the rim. 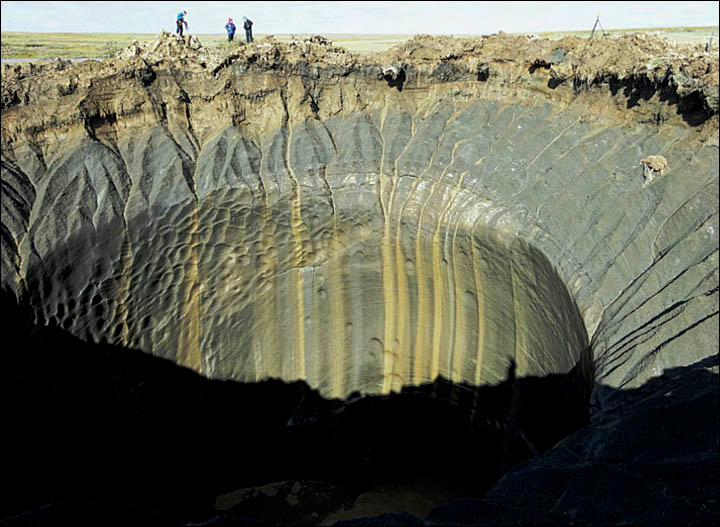 So what is happening here and what may the reason be? Is this the result of climate change and the warming of the tundra with the resultant explosive loss of methane from the permafrost?

The short answer is yes, probably, but that scientists are still not sure of all of the details yet.

The holes vary from 15 to 100 feet wide and up to 200-300 feet deep and the walls are frozen permafrost. This permafrost is a remnant of the last ice age tens of thousands of years ago. According to a Taz District local person, the earth first started smoking “and then a bright flash followed by a loud bang exploded above the tundra.”

The scientists do know from actual measurements that the temperatures in the Arctic are increasing faster here than any other part of the globe. In recent decades the temperature is increasing about 1 degree F per decade. They are also sure that greenhouse gases [GHG], primarily carbon dioxide [CO2], are the source of this temperature increase.

This permafrost is hundreds of feet thick deep in this region and contains large amounts of organic matter that can, and has, formed methane as part of the decomposition process. The methane is either frozen in place, or stabilized and contained in frozen “clathrates.” In both cases it is released upon warming.

Another image of a crater here is from The Moscow Times.

The amount of methane frozen in the permafrost is enormous. The concern is that this reservoir of gas, if released over a short period of time, could seriously and quickly alter Earth’s climate in a dramatic fashion. Studies are continuing but the data suggests that this risk is still low for now.

The concern is that methane is a very powerful GHG and some 20 plus times more potent than CO2. So even if this methane is “burned” in an explosion, or slowly oxidized, it still forms CO2 as a reaction product which is still a GHG.

The levels of methane in the atmosphere are being closely monitored for this very reason, both by NOAA [at ground level] and NASA [from space], and so far only small changes in the concentration of this gas have been observed.

The actual situation in the near future will to a large extent depend on what policies and global leadership is exerted in the next decade to rein in our greenhouse gas emissions and move to renewables and energy efficiency.

In the meantime, however, other changes in the Arctic are happening right now. The curve labeled “Arctic Sea Ice Extent” dated March 10, 2015, is from the NSIDC [National Snow and Ice Data Center, Boulder, CO] and further illustrates the warming that is happening in this region.

Sea ice extent in the Arctic is carefully measured in September, when it is at a minimum after the summer melt season is over, and before seasonal freezing begins. It is also followed in winter when the sea ice grows and reaches a maximum in March. This winter extent is then compared with previous years. As we can see from the curve, the 2014-2015 ice extent is far less, and below the solid line for the 1981-2012 average which further indicates the warming in this region. 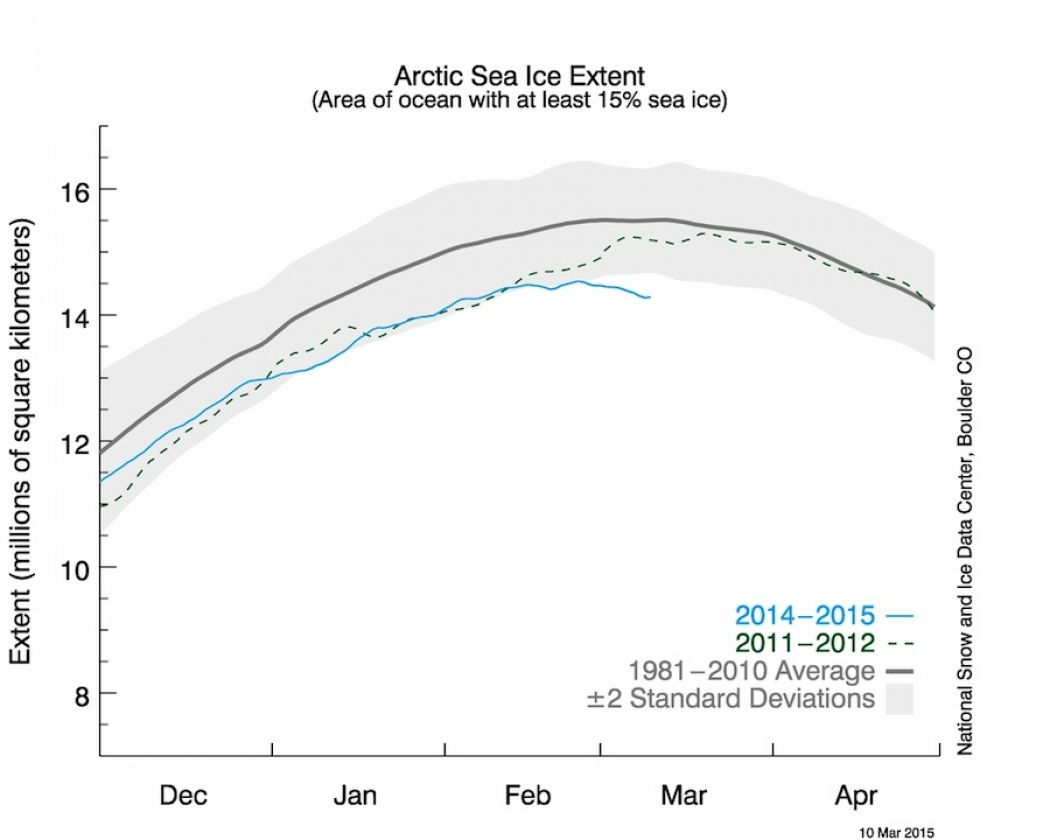