Now this is a sight; a grand piano being played while amidst ice flows in the high Arctic.

In an attempt to bring notice to the changes happening there, as a result of the enormous emissions of greenhouse gases [GHG] humans are putting into the atmosphere, a classical Italian composer and pianist Ludovico Einaudi, played an original composition, “Elegy for the Arctic.”

His piano, on a floating platform brought there by the Greenpeace ship, Arctic Sunrise, was situated infront of the melting Wahlenbergbreen glacier in Svalbard, Norway, far north of the Arctic Circle. This musical piece can be heard on-line, [is highly recommended; search: Ludovico Einaudi Arctic]. It also carries with it 8 million supporting individuals who are calling for the protection of the Arctic from oil, gas and mineral exploration and extraction. 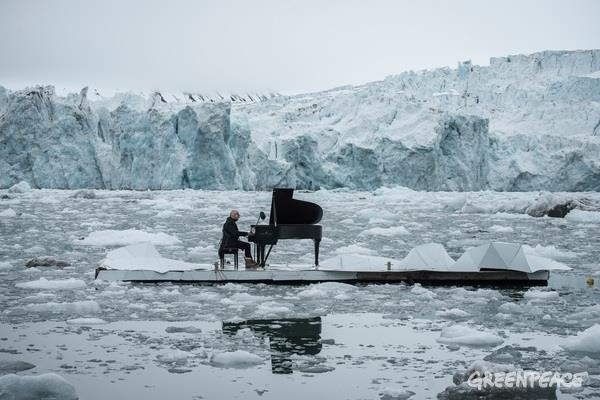 This part of our planet, the Arctic, is undergoing climate change, and warming, at a rate twice that anywhere else. This region is ocean surrounded by land, the reverse of Antarctica, which is land surrounded by ocean. During the summer of 2016 it tied for the second least ice cover ever measured.

Indeed, a cruise ship with over 1,600 passengers and crew traversed this region for the first time inhistory [ticket prices were in the range of $22,000 - $120,000]. The ship started in Alaska and finished up in New York City.

As a demonstration of how much the Arctic is being impacted, compared to the rest of the planet, note the three graphs labeled “Temperature Change for Three Latitude Bands”. The top graph of temperatures for the “Northern Latitudes” [which includes Clinton County] shows a steep increase of about 1.3 degrees Centigrade [C] over the past 30 years or so in the 115 year record. The middle graph labeled “Low Latitudes,” shows an increased temperature of about 0.8 degrees C over the same time period, but significantly less than for the “Northern Latitudes”. The third graph labeled “Southern Latitudes” also shows a smaller increase of about 0.5 degrees C in temperature.

The reasons for the Arctic amplification are complex and have to do with changing air circulation patterns, melting sea ice, increased energy from sunlight being absorbed in the now exposed darker waters and so on. 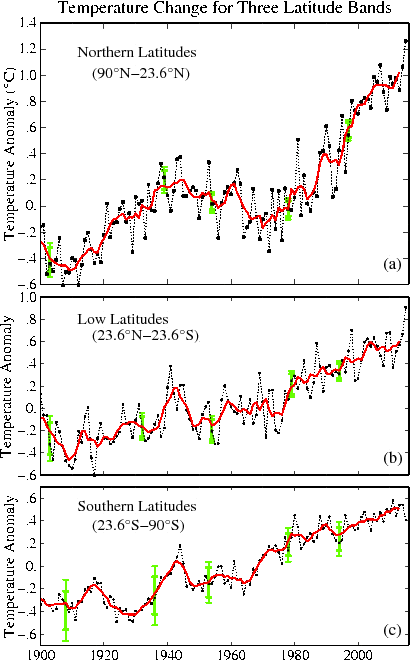 A long term 20 plus year effort, led by the United Nations, has been made in an attempt to get all nations to agree that climate change is real, is primarily the result of carbon dioxide emissions from the combustion of fossil fuels, and that these emissions must cease very soon.

Progress is being made to do just that!

On December 12, 2015, 191 countries signed the Paris Climate Agreement as part of COP21. This agreement will enter into effect 30 days after two conditions are met: there has to be at least 55 signatories to the agreement, and, they have to account for at least 55% of global emissions.

As of October 6, 2016 both of these conditions have been met and the Agreement goes into effect on November 4, 2016.

Thus the global commitment to fight climate change has now been agreed to. See Table here by “Climate Analytics” that summarizes the status. According to their website, another 16 countries [making the total 90], covering almost 71% of global emissions, have signaled their intent to sign by
year-end 2016. 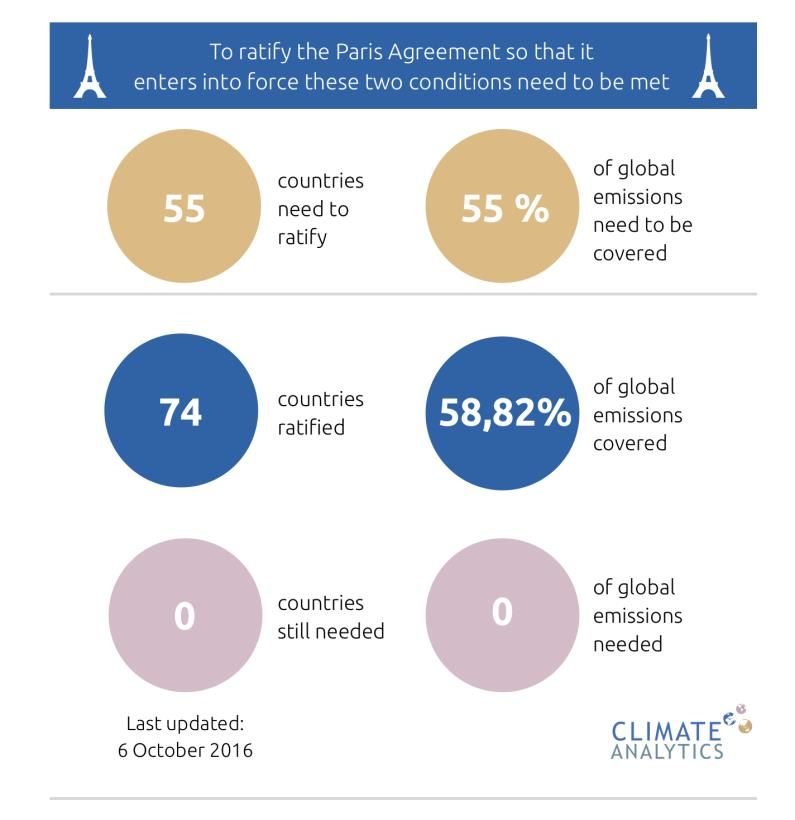 Each country has developed its own plan to reduce combustion of fossil fuels and/or may includesequestering or removing carbon dioxide from the atmosphere. The scientific consensus is that these plans are still insufficient to meet the stretch goal of keeping Earth to less than a 1.5 degrees C increase no less than the 2 degree C target.

At present the Agreement does not have any enforcement rules and each country will determine its goals and what is achievable in terms of its economy and culture. The expectation is, however, that future meetings such as the one coming up in Marrakesh, Morocco in November, 2016 [COP22] will
begin to address some of these shortfalls.

Meanwhile, this quote from the physicist Neil deGrasse Tyson and head of the Rose Space Center at the Museum of Natural History in NYC captures the irony of the fossil fuel path we are on. 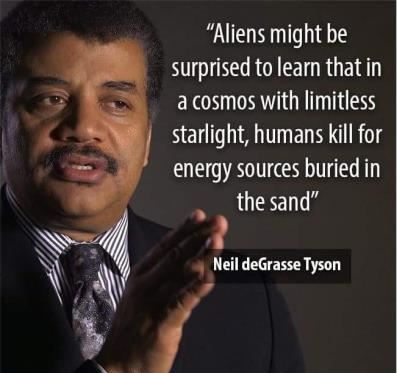