Menu
You are here: Articles2012 ICSUSA ARTICLESOctober 2012 - Solar Energy: Clean Source of Electricity for the Planet

October 2012 - Solar Energy: Clean Source of Electricity for the Planet

The sun, photographed in all its glory, is a thermonuclear powerhouse. It is a constant reminder of all of the energy coming to our planet every day and is the source of all power, and life, on Earth.

The diameter of the sun is about 865,000 miles or about 109 Earths lined up in a row, and consists of ~75% hydrogen, 23% helium and small amounts of other elements. It will continue to “burn” via fusion this hydrogen, converting it to helium, for billions of years to come. 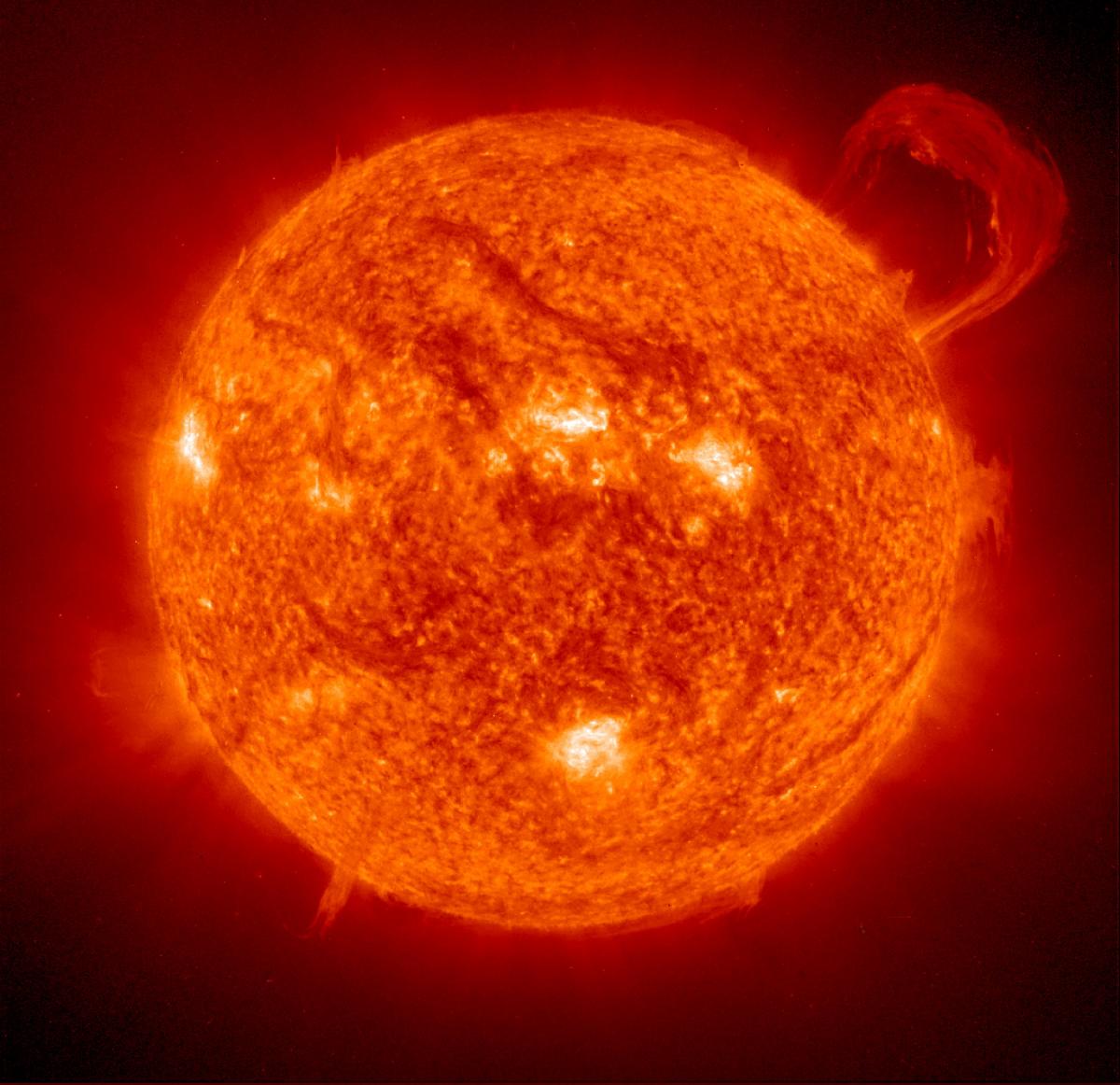 It is also the source of an enormous and growing amount of solar based electrical energy. Through the use of photovoltaic [PV] technology, some of the sun’s incoming energy can be converted directly into electricity and fed into the electrical grid just as fossil fuel sourced electricity is today.

According to Jeff Himmelman in The New York Times Magazine, August 2012, “enough sunlight falls on the earth’s surface every hour to meet the entire world’s energy needs for one year.” Furthermore, with today’s 15 – 20% efficient solar panels, and improving every year, a 100 mile by 100 mile array in the American southwest would meet the energy requirements of the whole U.S.

Germany has developed a national energy plan to power their modern society and technology rich industry. Their objective is to reduce their consumption of fossil fuels and emission of greenhouse gases [GHG] by 35% by 2020. They are steadily moving towards that goal. Their per capita emissions are currently half that of the U.S. Like most industrial economies, they have relied in the past on coal, oil, gas, nuclear and some renewable sources of energy to meet their needs.

Their center-right government under Angela Merkel [who has a PhD in Chemical Physics incidentally] recognizes the threat of climate change brought about by increasing levels of GHG. The changes in Germany’s energy supply made in the last several years are nothing short of amazing.

After the Fukushima nuclear disaster in March 2011 Germany shut down all 17 of their nuclear plants for safety reasons. Following a review, nine plants were restarted but all will be phased out by 2022. The government, and German people, are uncomfortable with nuclear power, its safety issues, and the need for long term waste disposal. They lived through the Chernobyl disaster and saw what happened to Japan after the Fukushima Daiichi meltdown.

With financial incentives, feed-in tariffs, and subsidies [like the U.S. still gives the fossil fuel industry], PV and wind power have become a major, and growing, source of their electrical supply.

They recognize that burning fossil fuels and putting carbon dioxide, a pollutant into the atmosphere, is a cost that is being socialized in that all people everywhere are paying the price of this pollution and not the power generating companies. The cost of this air pollution is not fully reflected in the price of electricity consumed.

Two highlights have occurred recently that tell a powerful story. In August 2011, sufficient wind powered electricity was being generated that Germany had too much power going into the grid. They had to shut or power down fossil fuel burning plants to bring supply and demand into balance. Then in May 2012, Germany’s PV generated power temporarily met more than 50% of its electrical needs!

They are able to integrate renewable energy into their requirements and still be the industrial powerhouse of Europe, and the second largest exporting nation on the globe [behind China]. 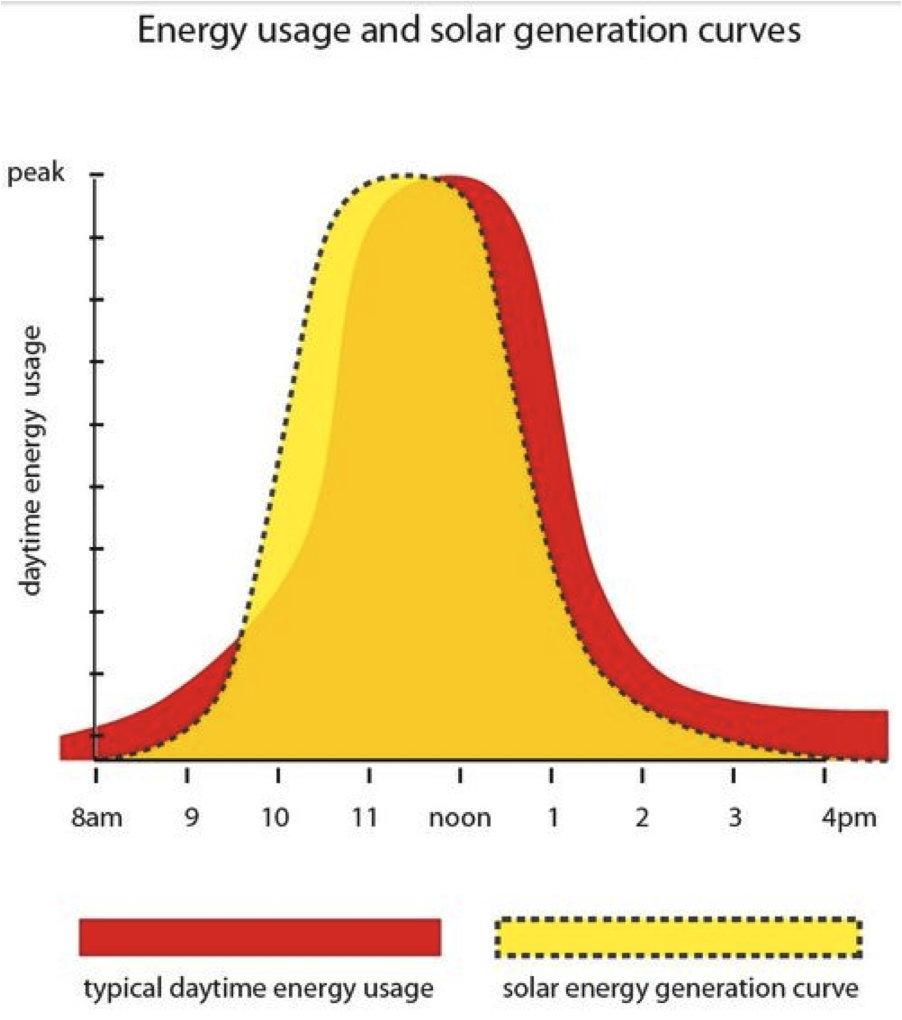 This is a natural fit. The energy required earlier in the morning, and later in the evening, not met by solar, could be met by other sources [wind and/or gas fired plants for example]. 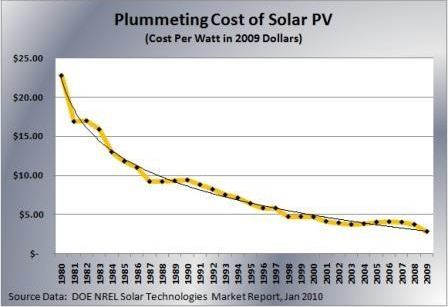 The cost of PV has been dropping dramatically over the past three decades. The Department of Energy graph through 2009 illustrates this. The last 3 years have seen additional price drops making PV very competitive with other generating sources in many markets.

What are we waiting for?