Menu
You are here: Articles2020 ICSUSA ARTICLESJuly 2020 - Transitions and Disruptions of the Status Quo

Transitions and Disruptions of the Status Quo

Just over twenty years ago we had Y2K [Year Two Thousand]. Remember? It was a millennial calendar transition and just a little different from the usual transition of one year to another. One issue that it presented, that kept managers awake at night, was all of the software embedded in just about everything electronic.

Most of this software was designed to handle the last two increasing digits of the 20 th Century [i.e. 89, 90, 91, etc] but not the last two digits of year 2000. When the millennium changed the concern was that the software would not know what to do after “99”; when presented with the “00” it could bring about failures in computer software, the electrical grid, payroll systems and so on. However, businesses solvedthis issue and the millennium started off just fine.

Now let’s move on from transitions to disruptions.

The year 1996 was the highpoint for Eastman Kodak. It had maximum revenue, and had at one point over 85% of film and camera sales. Kodak was the “name” and synonymous with film and cameras and more.

It stopped making a profit in 2004 and 8 years later, after shedding tens of thousands of jobs and closing many factories, it filed for bankruptcy in January 2012 and was soon delisted from the New York Stock Exchange.

Why? A disruption came.

Although it held the early patents for digital photography in 1975 it never developed or made use of the technology. Later, it found it could not make the switch from film to digital photography in time as other companies had taken the lead. Kodak, with its talented and highly paid executives, could not grasp, could not anticipate, the disruption that was happening to their business model. So it failed.

Another disruption is happening again today. This time it is in fossil fuels: mostly coal and oil.

Let’s look at what is happening to coal first.

Just 5 years ago coal provided about 35% of the electricity in the United States: and this was down from nearly 50% a decade ago.

This year, 2020, coal is projected to provide less than 20% of our electricity. For the first time this year, renewables wind, solar and hydroelectric, will produce more electricity [kilowatt-hours] than coal. [See graph titled “Renewables Rising”].

The information in this graph is from the U.S. Energy Information Agency [EIA] with the data presentation by Paul Horn of InsideClimate News. The graph shows that renewable power production will continue to rise. Assuming an economic upturn begins soon, coal plants may be turned on again but even so its power generation will still lag that of renewables.

This change, this disruption, is happening so fast that 11 coal companies have filed for bankruptcy in the last 3 years alone. No amount of roll-back in environmental regulations by the administration or increased subsidies will change this. The coronavirus pandemic and resulting economic shutdown, along with warmer winters and the lower cost of renewables is speeding this movement away from coal.

A report on June 30, 2020 highlighted a plan by 80 local, regional and national organizations to address the devastation to the communities impacted by this disruption. It’s called the National Economic Transition Platform and possibly used as a part of the Green New Deal, if politicians work together, and could be used as a template for community-based economic development for coal country.

This disruption is not confined to coal.

BP, one of the largest fossil fuel companies ever, wrote off $18 billion of its assets in June 2020; namely the oil and gas reserves on its balance sheet. The climate emergency has convinced them that those reserves will be worth less on a dollar-per-barrel basis in the very near future.

This fundamental transformation continues. A few weeks after BP wrote off some of its assets, Royal Dutch Shell made its own announcement: it would slash the value of its oil and gas assets by up to $22 billion for the same reason. Their analysis also suggests that these assets will be worth less in the coming years.

The stock market and investors are also watching this disruption happen in real time. See the graph titled “Apple is worth more than the combined value of global oil and gas majors.” 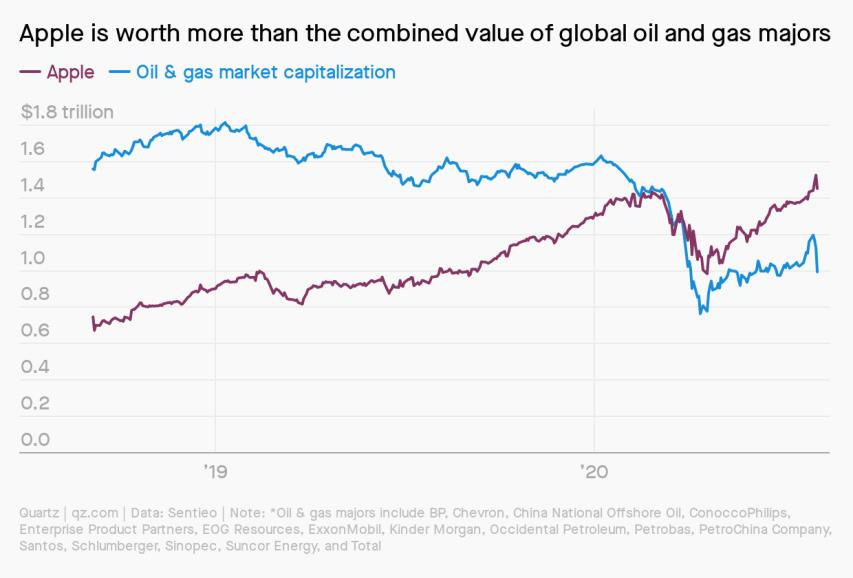 But it doesn’t stop here with coal and oil.

Duke Energy and Dominion in early July 2020, announced they have abandoned The Atlantic Coast [Gas] Pipeline. This 600 mile pipeline would have brought fracked natural gas from West Virginia through and into Virginia and North Carolina. If built, this pipeline would have generated more than 70 million tons annually of the global warming greenhouse gas, carbon dioxide, [equivalent to 20 coal plants] into the atmosphere.

We are seeing a perfect storm of events happening simultaneously: COVID-19 reducing demand for energy, cheaper wind and solar ramping up significantly and displacing fossil fuels, technological advances in the form of cheaper electric storage batteries, heightened public awareness of the “climate emergency,” the engineering efforts underway to electrify everything, and more.

Note the photo of a barge laden with 36 shipping containers in an inland waterway in Europe: it is not diesel powered. It is the first in a fleet of 150 inland vessels in service by 2030. It is powered by batteries in the two top left containers [PACK]. When depleted, the two battery containers are simply swapped out and replaced. This emissions free-shipping concept is the product of a consortium of companies in Germany and the Dutch Ministry of Infrastructure and Water Management.

No more sitting on a bus with stinky diesel fumes for these students in the Estrie and Monteregie regions of Quebec. [See photo of buses courtesy of Transdev Canada/Lion Electric]. Twenty-seven more of these electric school buses will be phased into the fleet starting in September 2020 adding to the four already in service. Plans are in place to electrify 100% of the Quebec school buses by 2025. 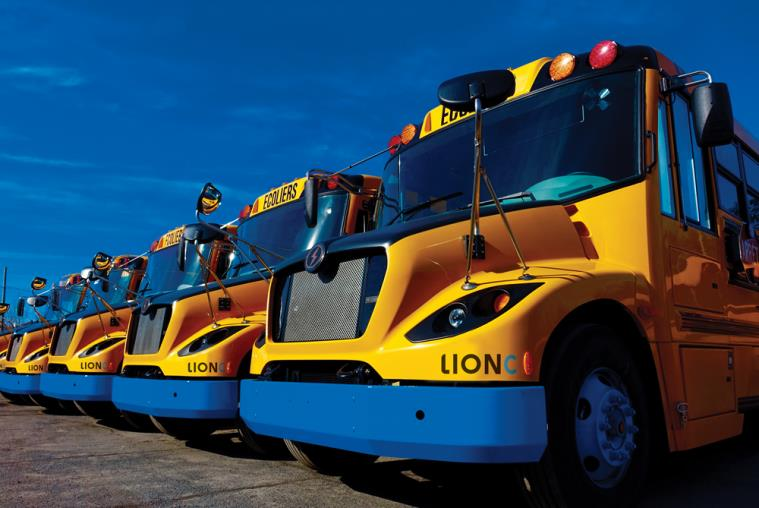 It is going to be quite the ride: hold on.