Menu
You are here: Articles2014 ICSUSA ARTICLESMarch 2014 - Climate Change: Challenges in Getting the Big Picture

Climate Change: Challenges in Getting the Big Picture

On a wall in Thailand there is an image of six people trying to describe an elephant. This is an ancient story in Asia and has many versions. The people are either blind, or have blindfolds on, or are in a darkened room.

Each person touches a different part of the animal and describes what they feel, but none see the whole, and thus no agreement on what this animal actually looks like. A wise man then comes along and tells them they are all correct and thus a more complete picture emerges.

In perhaps a similar fashion, this is what climate scientists face in trying to determine what is happening with the massive West Antarctic Ice Sheet [WAIS] as our climate changes. Just like the Asian fable above, a wide variety of researchers, tools, and scientific disciplines, are looking at different aspects of this ice sheet trying to understand may be happening to it, as our climate changes, to get the ‘big’ picture.

It covers roughly 800,000 square miles and contains about 10% of the ice in Antarctica. The size of WAIS is enormous and volume-wise contains about 574,000 cubic miles of ice and is just one part of the massive continent wide Antarctic ice sheet.

This ice moves from higher points inland, flows downhill to the coast, and parts continue to flow outward on the ocean bottom into water. This is a marine based glacier which means that its bed is well below sea level. It eventually calves icebergs into the ocean, some enormous. See “www.AntarcticGlaciers.org.” 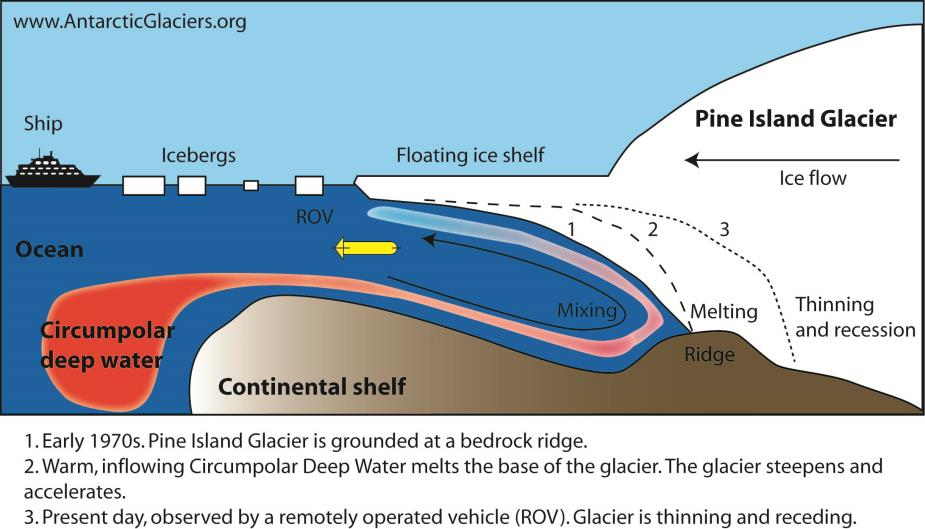 So, how does one go about trying to understand what is happening to it today, and where it may be headed in the future? What and how does one measure the events and processes that are beginning to occur?

One important tool of great value is the GRACE satellite program illustrated here.

This is a joint mission between the U.S. and Germany, and the satellites were launched in 2002 in Russia from their space center. The satellites move in tandem over the Earth’s surface and can measure minor gravitational changes, and hence mass, below them. This mass could be an ice sheet [like in Antarctica, or Greenland], a mountain range or some other landform with elevation differences from the baseline or sea level.

These results from space are clear; the WAIS is thinning and thereby losing significant mass. It is losing more ice than is being replaced by snowfall. One large part [about 20%] of this ice sheet is Pine Island Glacier which contributes more to sea level rise than any other glacier in Antarctica.

Glaciologists are studying the movement of this glacier. They stationed GPS instruments across it, and found it was moving into the Amundsen Sea at an astonishing rate of up to 2.5 miles a year. This movement is then coupled with other data. Oceanographers found, using robotic submersibles, [photo] that the water under the floating portion of the glacier is above freezing and actually melting the ice from below. See “www.AntarcticGlaciers.org.”

Additionally an international team of researchers recently spent two months camped on the glacier. They drilled holes at various points 1600 feet through the glacier and inserted sensors across its 31-mile long face to measure the sea temperature, currents, salinity and ice thickness. They found that the glacier was melting from below, or thinning, at the rate of 2.4 inches per day. This was reported in 2013 in the peer reviewed journal Science.

More alarming was the fact that the melting from below was destabilizing the glacier, detaching it from the sea bed and underwater structures that have slowed its movement previously. This melting allows it to flow even faster as bergs calve off the suspended end of the glacier.

Atmospheric scientists have proposed that changes in air circulation patterns may be causing upwelling of warmer ocean waters, and causing other changes such as a small increase in sea ice extent. As of November 2012 it is estimated that the mass loss of ice from WAIS was about 118 billion tons per year.

Like the elephant, the emerging picture is becoming clear; the rapid shrinking of the Pine Island Glacier
appears irreversible.