No, this is not a cool treat for you or the family in hot weather in Trinity Park, or elsewhere, although it sounds like that. This just happens to be the color of some of the ice in the Arctic that scientists are studying because of its ability to absorb energy from the sun. Also called ice sherbet, watermelon snow or blood snow, it has become a hot research topic in the relatively new field of glacial microbiology.

So what is happening?

See photo from mainenewsonline.com. While it may not be very obvious in the black and white reproduction here, the dark streaks in the snow are red or pink in color. Many more photos can be found on-line. 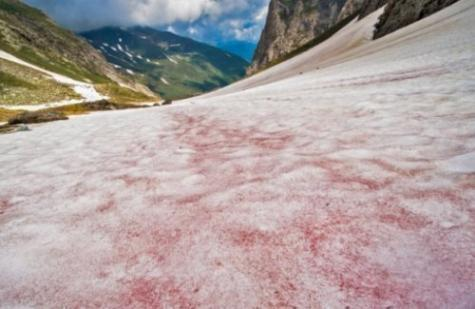 An early written record of this pink ice dates from 1818 by the Arctic explorer Captain John Ross who observed this on his trip to the Arctic along the northwest coast of Greenland. He actually brought back to England some ice melt which had a red color. It was first thought to be of meteoric iron origin but later identified as an alga.

In a peer review paper published in Nature Communications in December 2016, a team of geobiologists from Germany and Britain collected samples from 16 glaciers across the Arctic. They found that the algae was widespread and that the normally green algae turned red upon exposure to ultraviolet rays; a kind of natural sunscreen which also happens to absorb heat.

The cold-loving green algae is not new but with the warming of the Arctic regions it is now thought to be playing an important role in the melting of ice and glaciers in those regions. For those curious biologists among you the name of these cold-loving algae is Chlamydomonas nivalis.

As with many things in nature, most things are connected in some way with implications beyond the mere presence of these algae. Due to its’ darker color this algae changes the albedo, or reflectivity of the ice and snow, and so allows the darker surface to absorb more energy. This in turn allows moreglacial and Arctic sea ice to melt. As the Arctic sea ice melts, it exposes more ocean surface which is darker, which in turn reflects less incoming solar radiation and so it warms. The warmer temperatures and melting then promotes the growth of more algae and the cycle continues.

This is an example of a feedback loop.

Let’s look at a map of Alaska supplied by the National Weather Service and NOAA, titled “2016 Alaskan Warmth.” 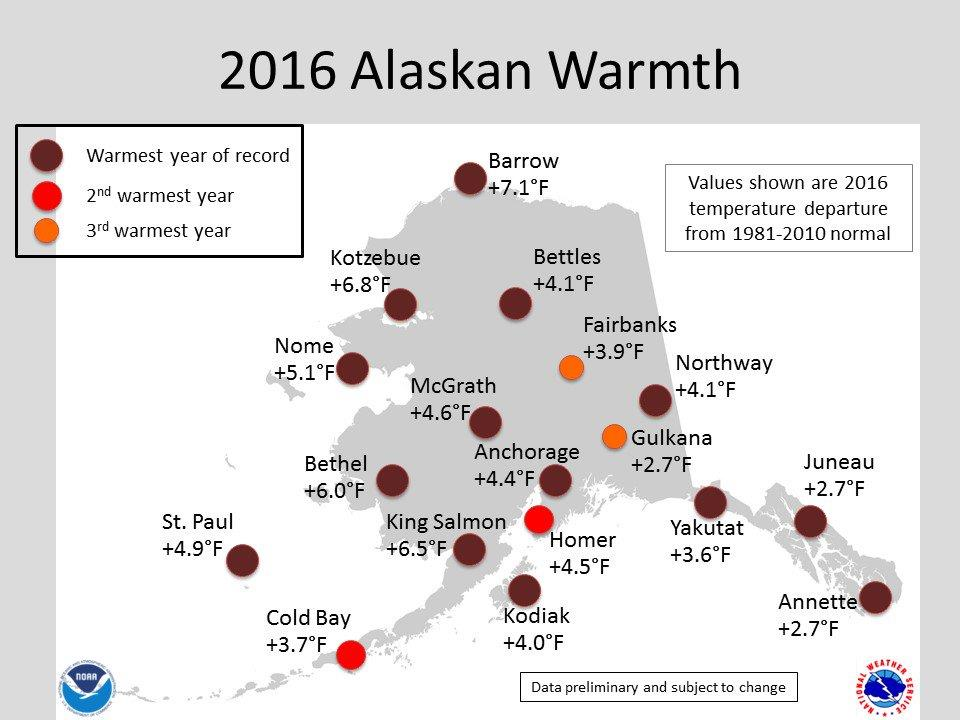 Every single one of the 18 weather stations on the map show record average temperatures for 2016. The values shown are departures from the period 1981-2010. The northern most point, Barrow, was a startling +7.1 degrees Fahrenheit warmer than the 30-year average for that station.

The impact and change in the formation of sea ice is profound. See graph “Arctic Sea Ice Extent.” The dark rising line in the middle is the 30 year average of sea ice extent. The lower dotted line is from the 2011-2012 year of record low ice formation while the trending lowest line is this years’ ice formation to 11 January 2017. All data are from the National Snow and Ice Data Center in Boulder, CO. 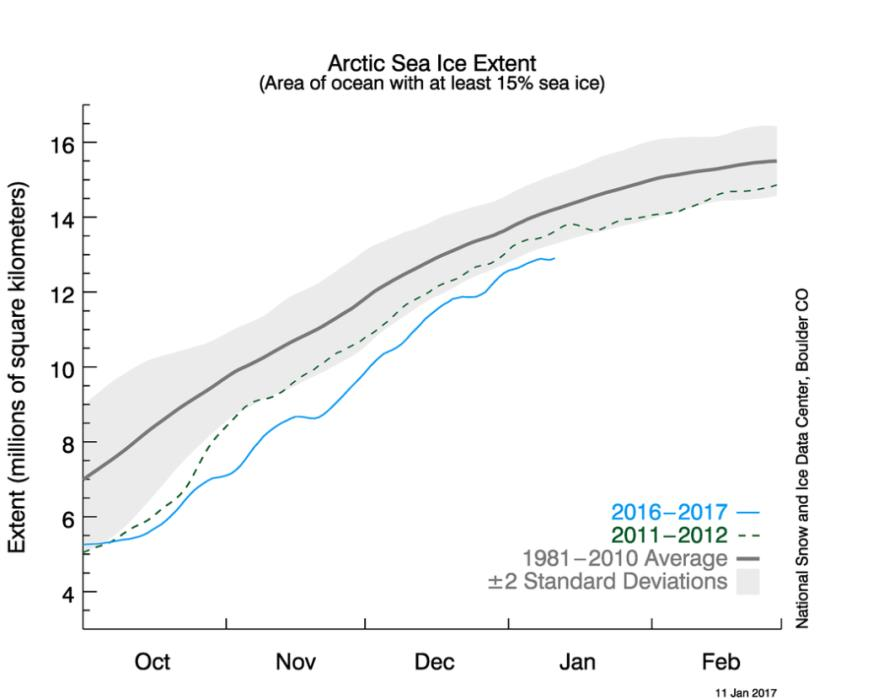 This cannot be the response to the presence of increased algae alone. Bigger changes to the Earth’s atmosphere are also occurring.

See the graph labeled “Temperature Anomaly (degrees C).” All of the six surface data sets from different agencies and countries, including the independent “Berkeley Earth” group, agree closely, especially in the last 3⁄4 century.

This global warming trend has been linked to enormous amounts of greenhouse gases [GHG] emitted into the atmosphere from the combustion of fossil fuels.

This inter-connectness of increasing global temperatures, decreased ice extent in the Arctic, increased amount of open water, algae blooms that absorb solar energy, and more, all work together to change Earth’s climate. And it is changing.