There is a huge coal-burning plant in Lamar County, Ga., that produces a lot of electricity.

In order to do so it burns a lot of coal. Each and every day three coal trains arrive and each one is two miles long. This is described in Bill McKibben's new book "Eaarth" published in April 2010 (p187).

Each rail car is about 50 feet long and has a capacity of about 120 tons each. This works out to about 105 coal cars per mile (5,280 feet) or 630 in a three-train day. This corresponds to about 75,600 tons of coal delivered, and consumed, a day. That is every day. One more calculation suggests that this one plant alone consumes about 27,594,000 tons per year. Now that is a mountain of coal.

If we connected together all these coal cars used in one year, it would stretch for 2,190 miles, or the distance from Plattsburgh to just short of Salt Lake City, Utah. Incidentally, according to the U.S. Energy Information Administration (EIA) website, in 2008 there were 599 coal-burning plants of varying sizes in the United States though none apparently as large as this one in Georgia.

When the carbon in coal from this one Georgia plant alone is burned, it combines with oxygen to form carbon dioxide gas with a total weight of over 100 million tons annually. And guess where this goes — yup, into the atmosphere. And this is only a tiny fraction of the total emissions that we produce.

Note that in the map (inset) of the coal fields of the United States, the EIA reports that over 1 billion short tons (1 short ton equals 2,000 pounds) of coal was mined, and burned, in 2009. Small amounts of this coal are exported but additional coal is also imported from Colombia, Venezuela and Indonesia. The United States coal was laid down long, long ago during four periods of the Earth's history when the planet was very, very warm and humid, and with carbon dioxide levels several times higher than today. 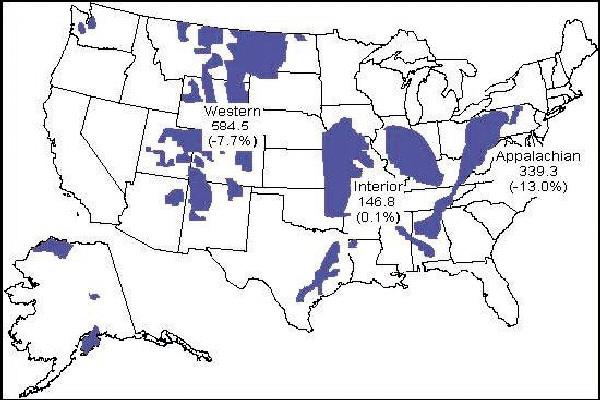 Here is one more interesting fact that might bring these numbers closer to home. If we run one 100-watt light bulb continuously for one year it would require the combustion of 966 pounds of coal, or almost one half ton.

It takes a moment for numbers this big to register and settle in. At least they do for me. What they do show is the enormous nature of the problem that we face in the United States, and globally, as we try to grapple with how we can reduce our fossil fuel consumption as we follow our energy intensive lifestyle.

But why is this consumption and the resulting carbon dioxide emissions a problem? Let's take a closer look.

Satellite and thermal data (J. Hansen et al, Science (2005) Vol. 308, 1431-1435) show that our planet has an energy imbalance. It is not unlike balancing one's checkbook. Measurements show that there is more energy entering Earth's atmosphere than it is emitting back to space; thus the imbalance. Now bear with me.

The energy from the sun comes to us in a wide range of visible and invisible wavelengths. The energy Earth emits back to space in order to maintain that energy balance also is a variety of different wavelengths.

Let's digress just for a moment.

We all enjoy the color of a red rose or a purple lilac or a white trillium. We "see" these colors because the visible wavelengths of energy we receive from the sun allow us to. We can see the red because the other colors (including yellow, green, blue and violet) are all absorbed by molecules in the flower and only the red is reflected back to our eyes. In a similar fashion, we can see the other colors in flowers with some wavelengths of light being absorbed and some reflected back to our eye.

OK, but what about carbon dioxide? What is the problem here?

Unlike colors, we can't "see" infrared wavelengths or rays. We can, however, sense them and if one holds a hand, or puts one's face closer to an incandescent light bulb, one can feel the infrared heat or rays emanating from it. Indeed, many bathrooms have these infrared bulbs in them to warm us as we emerge from a bath or shower.

Thus it is with carbon dioxide. In the same way that visible light interacts with molecules of color in flowers, infrared rays interact with carbon dioxide. The molecular structure of this tri-atomic gas that we can't see is ideally suited to absorbing infrared rays or energy that would normally be emitted to space. The arrangement of these atoms and the vibrations of each atom relative to the other make them ideally suited for this property.

All physicists, chemists and other scientists that have had spectroscopy in their training have used this principle at one time or another in their work. Spectroscopy by definition just means the interaction of different wavelengths of energy with matter — solid, liquid or gas. 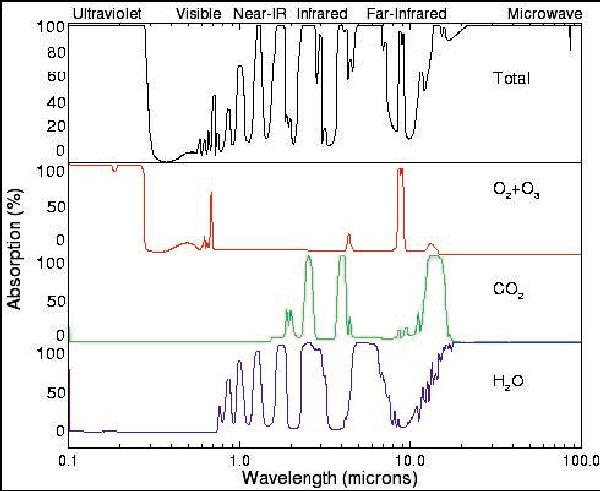 The lower portion of the chart here shows the infrared absorption spectra of three greenhouse gases (GHGs): water vapor, carbon dioxide and ozone. The curve on top shows the cumulative absorption total for these gases. If a molecule absorbs none of the wavelengths in the center portion of this region from 1.0 to about 10 microns, it would not be considered a GHG. But these particular molecules (and others) do absorb wavelengths of energy as shown by the multiple rising and falling curves from the zero baselines (their spectra).

NASA is reporting increased global temperatures, and indeed the first decade of this century is the warmest in the instrumental record; this will increase the amount of water vapor in the air. With fossil fuel consumption (coal, oil and gas) increasing, the amount of carbon dioxide and ozone in the air is also increasing. Therefore by increasing the amounts of these GHG we have the stage set for Earth's "energy imbalance" that is now being observed.

The big question we face is, "What are we going to do about it?"