Menu
You are here: Articles2022 ICSUSA ARTICLESFebruary 2022 - Blue Hydrogen, Green Hydrogen; What’s with these Colors and Their Connection to Climate Change?

Blue Hydrogen, Green Hydrogen; What’s with these Colors and Their Connection to Climate Change?

Let’s take a look at a little bit of chemistry first. Don’t worry, please stay with this and there are no tests. Hydrogen is the first element in the periodic chart and its atomic number is 1. It is a clear, colorless, odorless gas and is highly combustible. Also of note, hydrogen is the most abundant chemical substance in the universe and comprises about 75% of all matter. It exists as a molecule of two hydrogens and is a potent source of energy. The equation here (1) shows that when hydrogen [H2] is combined with oxygen, a large amount of energy is released [kj/mol] along with a byproduct, water [H2O]. This energy can then be used in a variety of ways including generating electricity
(1) H2 + O2 → H2O + 572 kJ (286 kJ/mol)
[This equation can also be read: hydrogen plus oxygen is combined to produce >>> water plus energy]

The attraction and interest in using hydrogen in this manner is that no carbon dioxide [CO2] is released. The latter, of course, is the major greenhouse gas [GHG] our civilization releases when we burn fossil fuels [coal, gas and oil] to obtain energy. This release of enormous quantities of CO2 into the atmosphere is the major cause of climate change, which is sometimes called global warming.

So, we have a conundrum. How do we get some of the energy our civilization needs and uses, without harming our planet and changing our climate?

This potential use of hydrogen is one possibility being explored as a partial solution to our energy needs. There are issues of course, as one gets into the weeds, as they say.

So, where can we get the large quantity of this hydrogen gas we would need?

BLUE HYDROGEN
At this time the primary industrial process to obtain hydrogen [called “blue hydrogen”] uses methane [natural gas or CH4]. It “reforms” methane to produce hydrogen along with carbon dioxide as a by-product. This is the problem. To get a clean source of energy [hydrogen] we would use a hydrocarbon [methane or CH4], add lots of energy along with water [H2O] to the industrial “reformer” process, and then deal with the carbon dioxide that is a by-product. See equation (2).

Obviously, the fossil fuel industry likes this approach as we would presumably continue to use one of the fossil fuels they produce in quantity, methane, or natural gas.

Billions of dollars of grants from the U.S. Energy Department are being invested in trying to make the process economical and to deal with the CO2 produced. How do you collect enormous quantities of this gas mixture, separate out the CO2 from the desired “blue hydrogen” and then, what do you do with thisCO2 once one has it? At this time in the U.S., this CO2 gas is pumped back underground in order to flush out more oil.

Not good from a planet point of view as this just produces more oil and more CO2 when burned.

Air Products, in Edmonton, Canada, announced in 2021, plans to invest $1.3 billion to build a complex to make “blue hydrogen” and to capture and store the CO2 produced. It will use a “reformer” process as described above.

But this company is hedging its bets and is also involved in a major project to produce “green hydrogen”.

GREEN HYDROGEN
The goal in this $5 billion project in Saudi Arabia, is to produce “green hydrogen” using renewable energy. This project involves using electricity from renewable sources, such as wind or solar, to split water into hydrogen and oxygen; no carbon dioxide is produced. This would be good for the planet, and the climate. The economics of these approaches are still being determined and whether any of this is the best use of taxpayer dollars. The overall reaction (3) would look something like this. In specially constructed equipment water [H2O] plus electricity [2e-] would produce hydrogen [H2] and oxygen [ O2]. The latter is not a pollutant; it sustains us.
(3) H20 +2e →  H2 + O2

If this, or any of these projects, do succeed in producing large quantities of hydrogen, then what does one do with it. It must be collected, purified, compressed, transported, distributed, … safely, and then used in special equipment. These challenges are significant and still to be met.

This research and development effort has lots of different aspects that cannot possibly be covered here. But suffice it to say, the production of “green hydrogen” could go part of the way to meeting our energy needs without having to also deal with carbon dioxide as would be the case for “blue hydrogen.”

The energy disruption is underway. As we move away from fossil fuels it will be a messy process with lots of false starts and dead ends until we get a cost competitive, environmentally friendly solution that gives us some of the energy we need without producing CO2.

In the meantime research and development projects are underway to use “blue hydrogen.” The photo [courtesy of Alaska Air Group] of the airplane is one of many. The Alaska Air Group is working with ZeroAvia to convert a 76-seat De Havilland Canada Dash-8 to hydrogen-electric with an intended range of 300- 500 miles; ideal for short range flights.

And the disruption story continues.

A lead story on page one in The New York Times on Tuesday, February 8, 2022 is titled, ”Electric Cars Set for Breakthrough as Sales Soar.” It talks about Ford, GM, Volkswagon, Mercedes-Benz, Porsche, Tesla, and the demand for their full electric vehicles [EV]. The consequences for the factory workers, businesses and the environment are enormous: some models are sold out for 2 years.

According to the article about 4% of the new cars sold in the U.S. in 2021 were EV; this is twice the amount sold in 2020. Sales would have been higher except that more EV were not available due to supply chain issues.

In Europe the changeover is even more dramatic. In 2015 more than 50% of the cars sold there were diesel, but in December 2021 battery powered cars outsold diesels.

See the two circular charts: one is labeled “December 2021 UK Passenger Auto Registrations. It shows that 33.2% of the new vehicles registered were PEVs [plug-in electric vehicles].

A comparable chart for Germany [not shown] shows registrations reached 35.7% in December 2021; and Sweden reached 53.6% in the same time period.

What is astonishing is that Norway, for the same period in 2021, reached 90.0% PEVs. See circular chart.

Change is coming. Hang on. 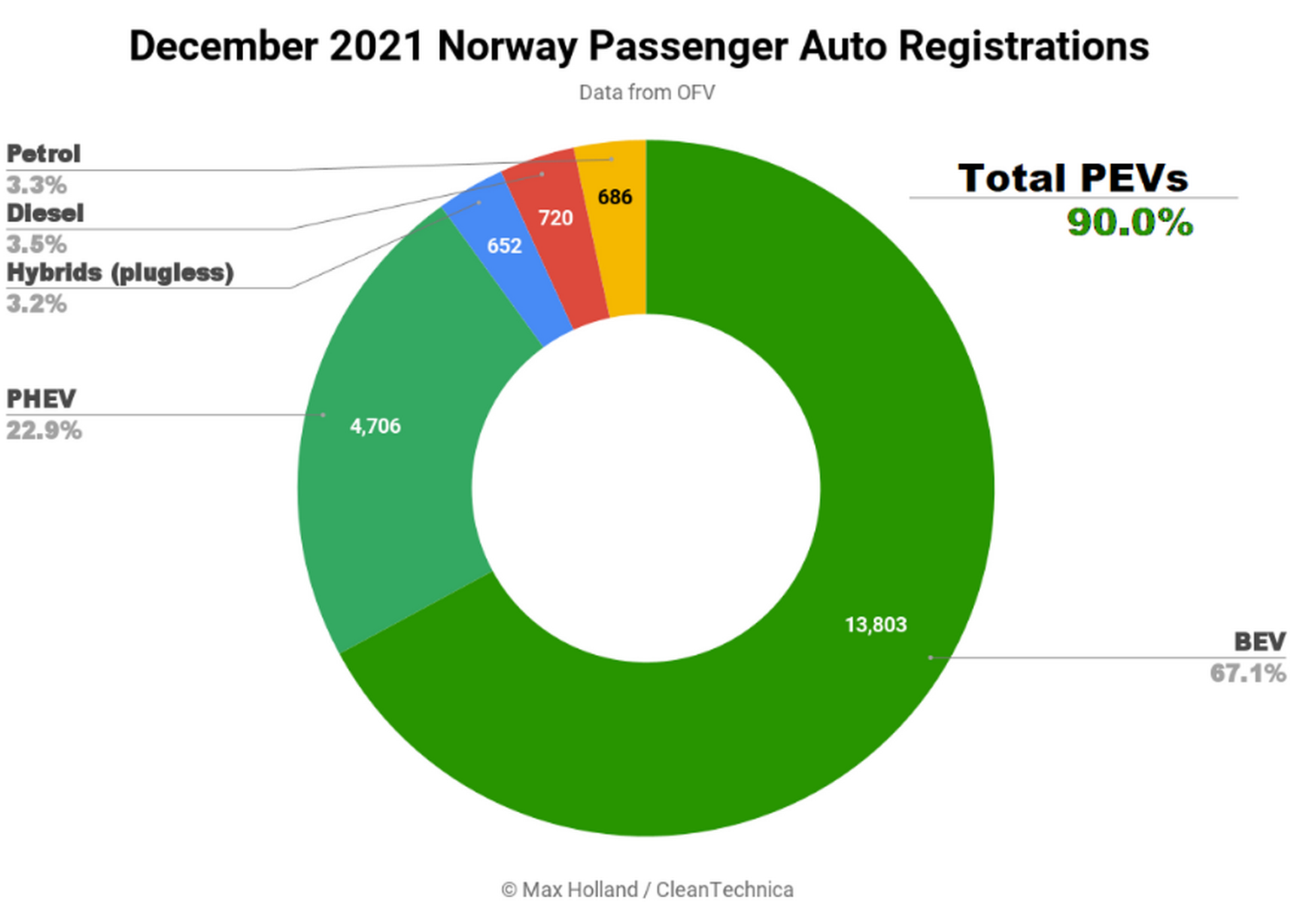