Menu
You are here: Articles2021 ICSUSA ARTICLESAugust 2021 - Domes, the Climate Crises and the Energy Transition

Domes, the Climate Crises and the Energy Transition

How about the Astrodome? It was opened in 1965 as the first multi-purpose, domed sports stadium and housed the Houston major league baseball and football teams. Or the geodesic dome built for Expo 67at the Montreal World’s Fair as part of the American Pavilion and still in use today. Popularized by Buckminster Fuller, the geodesic dome is extremely strong for its weight, inherently stable and enclosed the greatest volume for the least surface area.

But there is another kind of dome that has appeared in the news recently: the “heat dome.” Extreme, record breaking temperatures in the United States [California, Oregon, and Washington] and in Canada [British Columbia] have been attributed to this atmospheric occurrence.

See the illustration titled “How a heat dome forms” provided by BBC.

Let’s follow the sequence: 1. A mass of warm air builds up in still and dry summer conditions. 2. High pressure in the atmosphere pushes the warm air down. And 3. The air is compressed and gets even hotter. 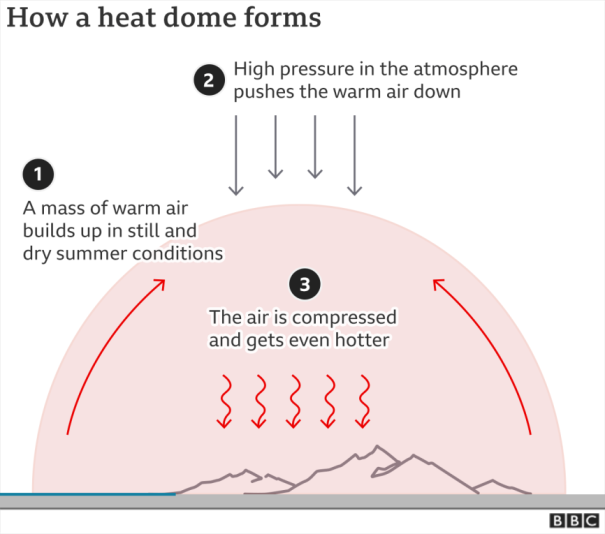 But the process does not end here. Now the jet stream gets involved.
The jet stream has been in the news a lot recently. Most recently, February 2021 saw a large lobe in the jet stream drop far to the south in central U.S. that brought sub-zero temperatures from the Arctic tolarge parts of Texas and surrounding areas. Indeed, 69% of Texans were without electricity at one point and half were without water. Many deaths were associated with this extreme cold event.

But next, see the illustration also from the BBC [bbc.com/news/world] titled, “Heat dome diverts the jet stream – which in turn holds it in place.”

So in the case of this recent heat dome event, the jet stream was diverted to the north [!!!] around this high pressure area, as shown in the diagram, leaving it intact and in place where it lingered for days. 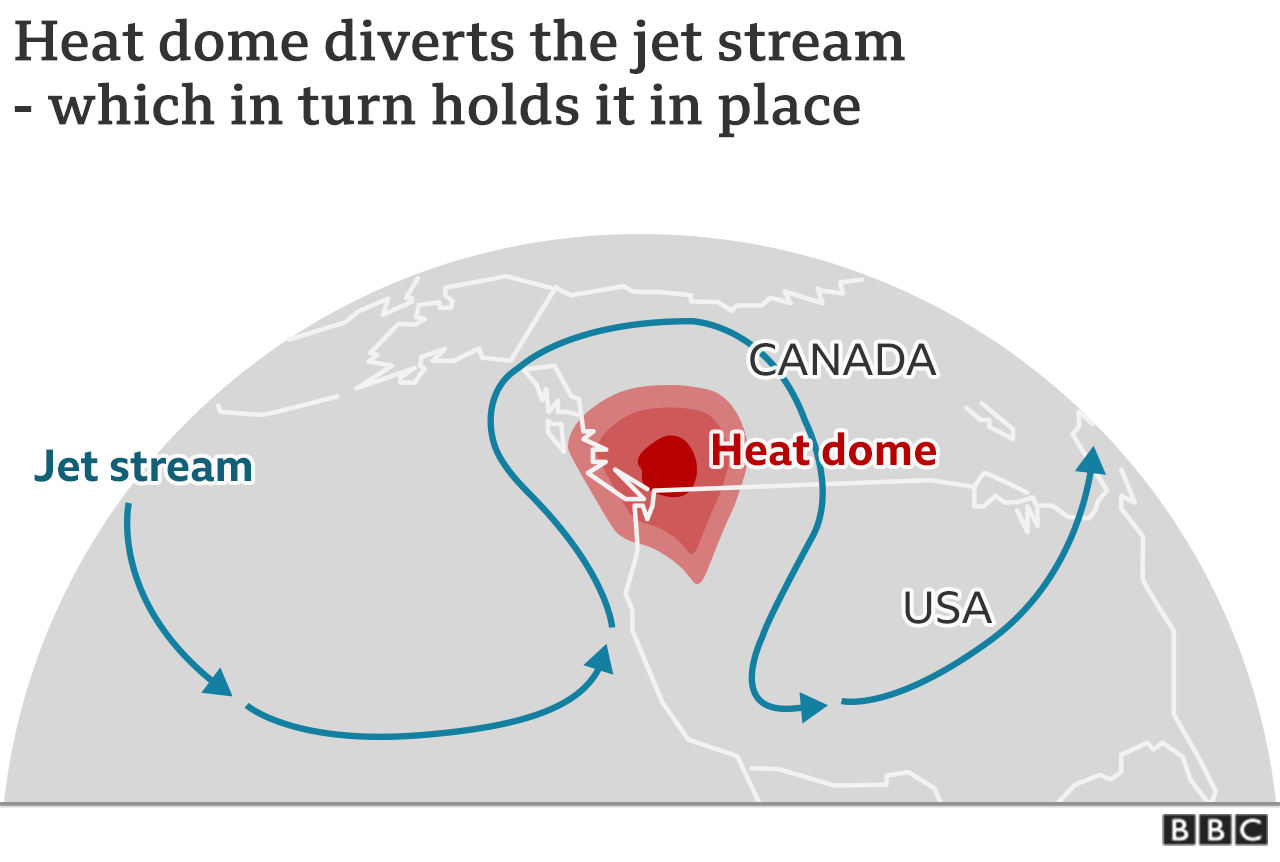 This illustration also shows in white outline most of North America. The portion of the heat dome over British Columbia resulted in a temperature of 121 degrees Fahrenheit in the town Lytton which turned out to be the highest ever recorded temperature in the whole country of Canada. A few days later about 90% of Lytton burned to the ground as a result of wildfires.

In a sense the North Country was not spared either. With ash and smoke from the wildfires rising as high as 55,000 feet, winds carried it east, and haze, and the smell of smoke were very much in evidence throughout our area; indeed all over New England. The haze is caused by the very small PM2.5 tiny particles that are hazardous to our health.

Both Seattle, WA, and Portland, OR, broke all-time high temperature records with temperatures in the triple digits for days. So much for the cool and comfortable Northwest where most people did not need, or have, air conditioning.

This is causing thawing of the permafrost which impacted an 810 foot section of the Trans-Alaska Pipeline System [TAPS]. Note photo by Edwin Remsburg/VW Pics via Getty Images, of a portion of the 800 mile pipeline running through the Arctic landscape with a mountain range in the distance. 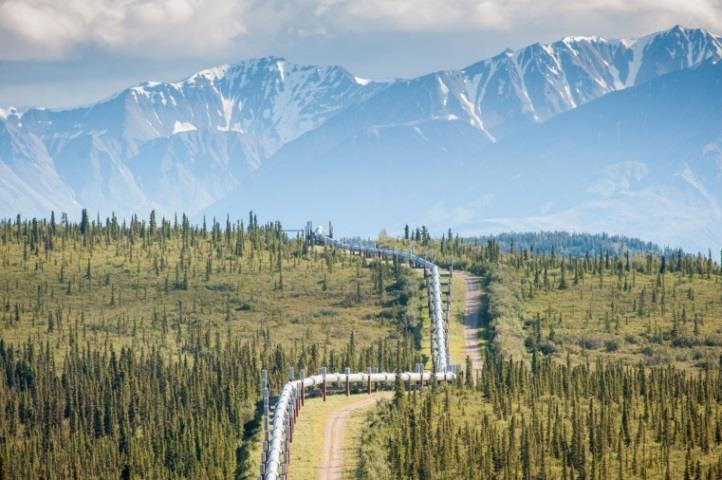 Apparently, thawing of the tundra caused several of the pipeline braces or supports to tilt and bend, risking a major oil spill. The solution: refreeze the permafrost. See the image, “Refreezing Thawing Permafrost” by Paul Horn/Inside Climate News. This is the first known instance of damage to the pipeline supports caused by thawing permafrost.

Indeed, the irony here is that the combustion of this fossil fuel [oil] carried by this pipeline leads to increased carbon dioxide emissions, which leads to increased air temperatures which in turn leads to the thawing of the permafrost in the Arctic regions. 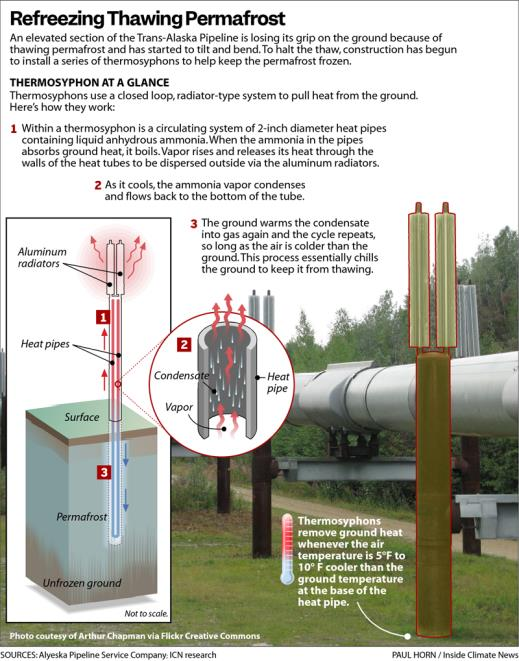 This engineering solution involves a Thermosyphon, which uses a closed – loop, radiator type system to pull heat from the ground; basically refreezing the permafrost. About 100 of these units will be installed to refreeze the tundra and stabilize the pipeline.

As has been noted before, the energy transition, or energy disruption is continuing.

According to the U.S. Energy Information Administration [EIA], a milestone of sorts has been reached.

Renewables exceeded both nuclear and coal for the first time on record.

See graph by the EIA, titled, “Annual U.S. electricity generation from all sectors (1950 -2020).” The units on the left axis are in “billion kilowatthours (kWh).”

The four major sources of power generation are natural gas (40%), renewables – includes hydro, solar, wind, biomass and geothermal (21%), nuclear (20%), and coal (19%). The data here for solar includes both utility-scale solar [>1 megawatt] and small-scale solar, such as grid-connected rooftop panels. The growth in 2020 was 26% for utility-scale and 19% for small-scale solar compared with 2019. These growth rates are particularly impressive considering that COVID-19 forced an economy-wide lockdown in 2020.

And this is not all.

Infrastructure that would be used for the eventual consumption of natural gas, a fossil fuel, has been denied.

The province of Quebec has rejected an application from a Quebec-based natural gas company to build a C$14-billion natural gas terminal in the Saguenay region east of Montreal.

In addition a new report [“Reach for the Sun”] from India’s Council on Energy, Environment and Water, and the financial think tank Carbon Tracker, suggests we are about to see a historic “leap-frog” in many emerging markets. Many countries will not invest in soon-to-be-obsolete fossil fuel generation capacityand move directly to the cheaper option of renewables. Fossil fuel based electricity production may now have peaked.