Menu
You are here: Articles2015 ICSUSA ARTICLESSeptember 2015 - Carbon Atoms, Like Ice Cream, Have Different Flavors Too

Carbon Atoms, Like Ice Cream, Have Different Flavors Too

Somewhat similar to the Howard Johnson chain of the past, with its 28 flavors of ice cream, one might say that carbon atoms also have “flavors.” Nature has been a bit more stingy with the element carbon, however, which has only 15 different “flavors,” more accurately called isotopes.

There are three “flavors,” or isotopes, that are of primary interest in shedding light on the potent and persistent greenhouse gas [GHG], carbon dioxide. All of the dozen other carbon isotopes exist for much shorter times and are of lesser interest in the discussion of climate.

As noted in the illustration [sahra.arizona.edu] there are two stable isotopes [ 12 C and 13 C] and one unstable and relatively long-lived radioisotope [ 14 C]. Note that the latter has a half-life [t 1/2 ] of 5715 years at which time half will be gone.

Why this focus on carbon?

It is because carbon is the primary component of fossil fuels, that when burned produce carbon dioxide and these isotopes present in that gas can teach us a lot about Earth’s climate system.

The levels of this GHG today exceeds 400 parts per million [ppm] which is higher than any other time in the last 8-10 million years.

That is no misprint!

And the connection between higher levels of this heat trapping GHG and increased global temperatures has been known for well over a century. To make a point the August 2015 issue of Scientific American has a photo, taken during a recent hot spell, of an egg being cooked on the pavement in Melbourne, Australia [Flickr].

So what do these three carbon isotopes have to tell us?

Coal and other plant-derived fossil fuels have virtually no 14 C remaining. It is not detectable and therefore these materials are very old.

The 14C in our atmosphere is produced continuously by cosmic rays. This isotope then steadily decays over time making its concentration [with production and decay] more or less constant. Not true anymore. This isotope is now a smaller fraction of the total amount of carbon in our atmosphere because it is being diluted by billions of tons of carbon emitted from fossil fuels combustion which do not have any 14C. This is one proof that the increasing amounts of carbon dioxide in the atmosphere is coming from the combustion of fossil fuels.

It is coming from us.

Another isotope also tells us more. Plants with all of their finely tuned photosynthetic machinery have an enhanced appetite for the 12C isotope in air. Thus the coal seams laid down millions of years ago from plant remains are enriched in Carbon-12. When burned, this gas with this enriched  isotope is exactly what we are finding today. Analysis of the atmosphere shows a much larger fraction of 12C than 13C than previously.

This is further confirmation that the high levels of carbon dioxide in the atmosphere today are coming from us.

This science, and the conclusion drawn, confirms why our civilization today must reduce its emissions of carbon dioxide. If we do not, temperatures will continue to rise with all of the attendant issues of extreme weather, sea level rise, acidifying oceans, melting glaciers and icecaps, and the like.

This awareness is causing many counties to make policy decisions to do just that: reduce carbon emissions. The OECD [Organization for Economic Co-Operation and Development] with its motto 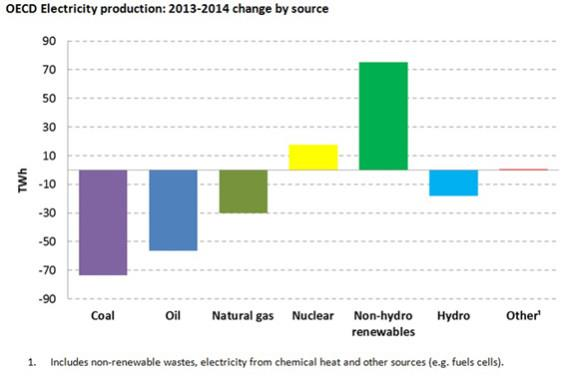 “Better Policies for Better Lives” is a case in point. There are now 34 nations that are a part of this pact and the bar chart labeled “OECD Electricity production: 2013-2014 change ...” highlights some progress. The left vertical scale shows the terrawatthours [TWh] of electricity generated by the 7 different sources of energy from “Coal” to “Other”.

The decreases in electricity production from Coal, Oil and Natural Gas combustion, all sources of carbon pollution, and the production increase from Nuclear and Non-hydro renewables [solar and wind] is a broad and promising trend.

Another promising trend is that the U.S. installed a record amount of wind turbines for 2 nd quarter 2015. It totaled 845 turbines with a capacity of 1,661 megawatts [equivalent to about 1.5 nuclear power plants].

Texas wind installations lead all of the other states by far [map shows total megawatts installed]. 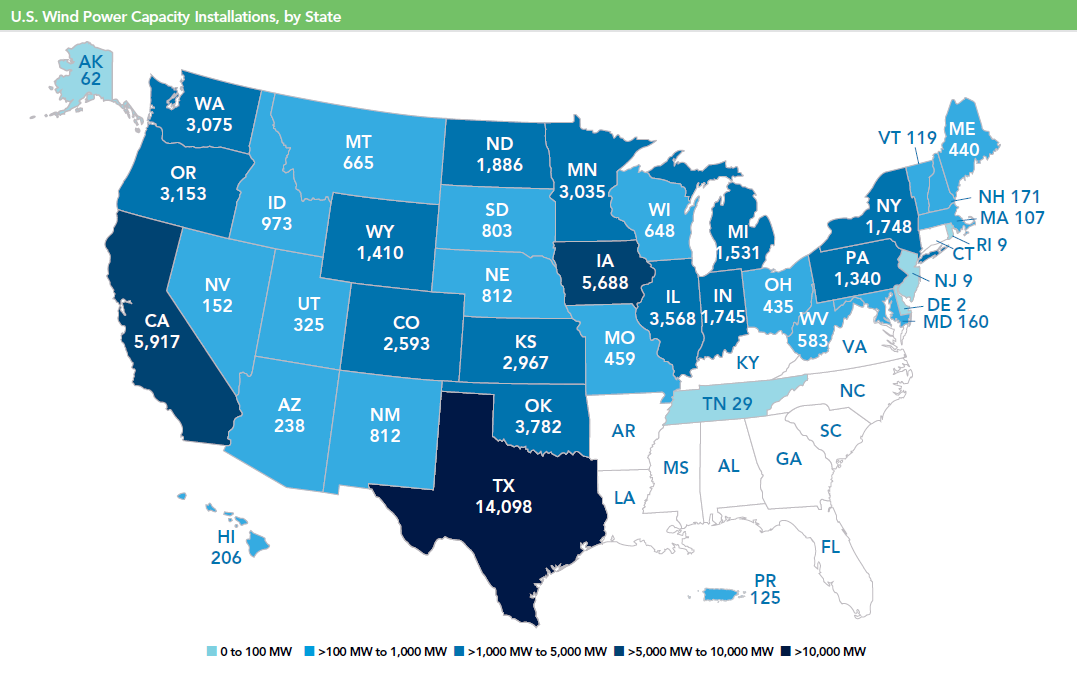