Scientists have been criticized by some that they talk in technical jargon and in a low key and matter-of-fact way. Some say that they do not sound alarmed enough, though some skeptics might disagree, and that they do not try hard enough to fully voice their level of concern with the public.

So the title above is intended to get attention and to try to communicate this concern.

Here is one definition of “Death by a Thousand Cuts,” [Wikipedia] to consider; “Creeping normality, the way a major negative change which happens slowly in many unnoticed increments is not perceived as objectionable.”

Most of us have not been to Antarctica so hearing that the ice sheets [on land] are losing mass, is a faraway happening, and perhaps hard to relate to. Other research data and recent peer reviewed reports show that several huge marine glaciers that terminate in the ocean in Antarctica, are melting from underneath and sliding more rapidly into the sea. This is caused by warmer ocean waters.

They are no longer resting on the ocean floor and the process appears to be unstoppable. This unstable process will raise sea levels many feet over the next century or two. There is nothing we can do to stop it now. Think New York City, Miami, New Orleans and other coastal cities globally that will flood and send displaced people somewhere else. Where?

Indeed, satellite data show that sea level rise has accelerated over the past decade. How about increasing temperature? The graph of 20,000 years of temperature changes from several peer reviewed papers is another aspect of climate change. It shows our planet coming out of the last ice age 20,000 years ago when temperatures were about 3.5 degrees C [6.5 degrees F] colder than today.

Several studies have shown that temperatures then stabilized in a narrow range over the last 8,000 to 9,000 years [see graph] which allowed civilizations to develop and flourish. Indeed the temperature until a century ago was slowly dropping a few tenths of a degree suggesting that we may have been gradually heading into a cooler period. No longer.

The sharp vertical line “Now” shows that global temperatures are higher than at any time in the last 9,000 years and will go higher based on our emissions of greenhouse gases [GHG].

We are entering a temperature zone never experienced by humans. The steps we take in this next decade to move rapidly to renewable energy will determine just how much higher they will go.

But it doesn’t stop here.

Extreme or weird weather events are occurring in the U.S., and globally, on a frequent basis. The map in figure “Right now in Colorado...” is indicative of weird and/or extreme weather in part enhanced by the extra moisture and energy in the atmosphere. This May 8 [2015] weather report shows a “Winter Storm Watch” with up to a foot of snow forecast, and a “Tornado Watch”, are occurring within less than 10 miles of each other.

Tornado alley has always been a feature of Oklahoma and surrounding states but this event was different than any in the known past. OK is normally dry with little rainfall. However the 50 tornadoes that recently swept across the area were accompanied by very heavy rain. Over 7 inches of rain, a
record, fell in a few hours with 3 inches in just one hour. One grisly story that emerged was of a woman who sought refuge in her underground tornado shelter only to drown there from the resultant flooding.

The mayors of Miami and South Miami are spending hundreds of millions of dollars on adaptation to flooding and rising sea levels while the governor of FL denies that climate change exists. 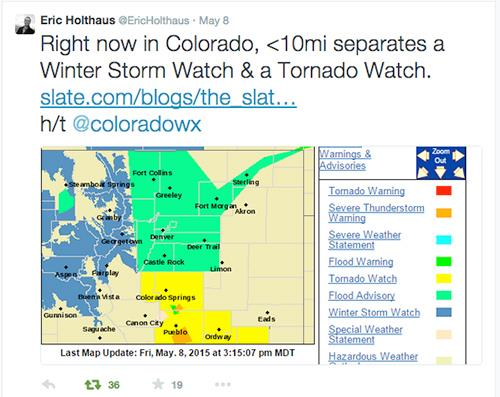 Such is our body politic today that fossil fuel money turns our elected officials against the citizens that voted them into office. 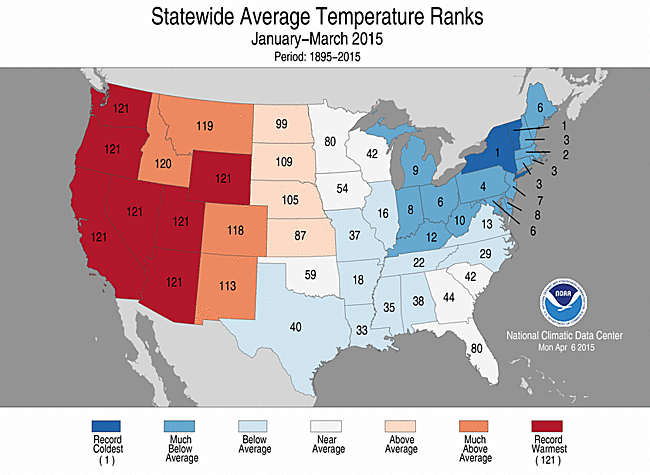 What is it going to take to get us moving?