Menu
You are here: Articles2013 ICSUSA ARTICLESJanuary 2013 - Climate Change Consensus and a Call to “Photovoltaic” Arms

January 2013 - Climate Change Consensus and a Call to “Photovoltaic” Arms

What is the answer?

So what is the question? It is hard to formulate a response to either when the body politic does not allow, or encourage, any dialogue on the issue of Climate Change. But “Nature” is speaking to us loud and clear: consider the tens of thousands of high temperature records and extreme weather events experienced in the past several years.

Science is also speaking clearly, although perhaps not as loudly as it should. But as the diagram below indicates, there is no debate among scientists in the peer-reviewed literature about what is happening to Earth’s climate system.

Dr. Powell [see below] used the Web of Science, an online science publication tool, to check publications starting January 1, 1991 through November 9, 2012 in the peer-reviewed literature, the gold standard of science. Of the almost 14,000 research papers on “global warming” or “global climate change,” only 24 could be found that reject global warming [Science Progress November 15th, 2012]. This minority view is less than 0.2% of the total. Not much of a dispute among scientists who publish in the field. 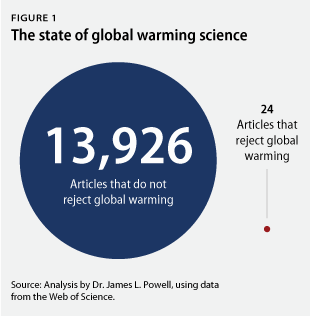 Meanwhile in the U.S., it is pretty much business as usual: burn lots of fossil fuels to generate the energy needed by our civilization today. The following graph through 2011 shows that the large portion of energy we generate comes mostly from “Fossil Fuels,” with smaller amounts from “Renewables” and “Nuclear.” The energy units used here on the left scale are in “Quads (1015 BTU)”, a very large number indeed

That “Renewables” registers at all on this graph is mostly a result of individual, local and state efforts to develop and install renewable energy. On the national scene we are beginning to see some modest progress. What has been accomplished still represents a small percentage of our energy requirements, however, and lots more needs to be done. 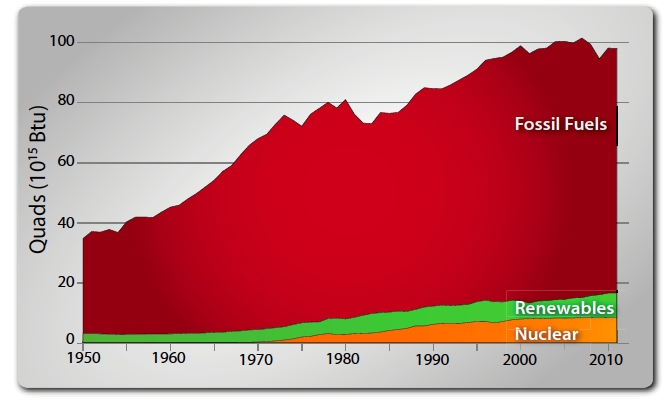 This same graph also shows a small dip and leveling off in energy consumption starting in 2007 as a result of the “Great Recession.” As the economy began to recover we can see the upturn in energy consumption begin again. The last 2-3 years are still below the recent past in terms of the amount of fossil fuels consumed and carbon dioxide emitted.

Apparently, increasing the fuel efficiency of our vehicles, home insulation efforts, investments in wind and solar, and some regulatory initiatives are beginning to have an impact.

The combustion of any fossil fuel [gas, coal, oil] releases energy and carbon dioxide. It is this huge quantity of greenhouse gas that is emitted into the atmosphere and its ever rising levels that concerns climate scientists. It should also concern our political leaders and every citizen on the planet. 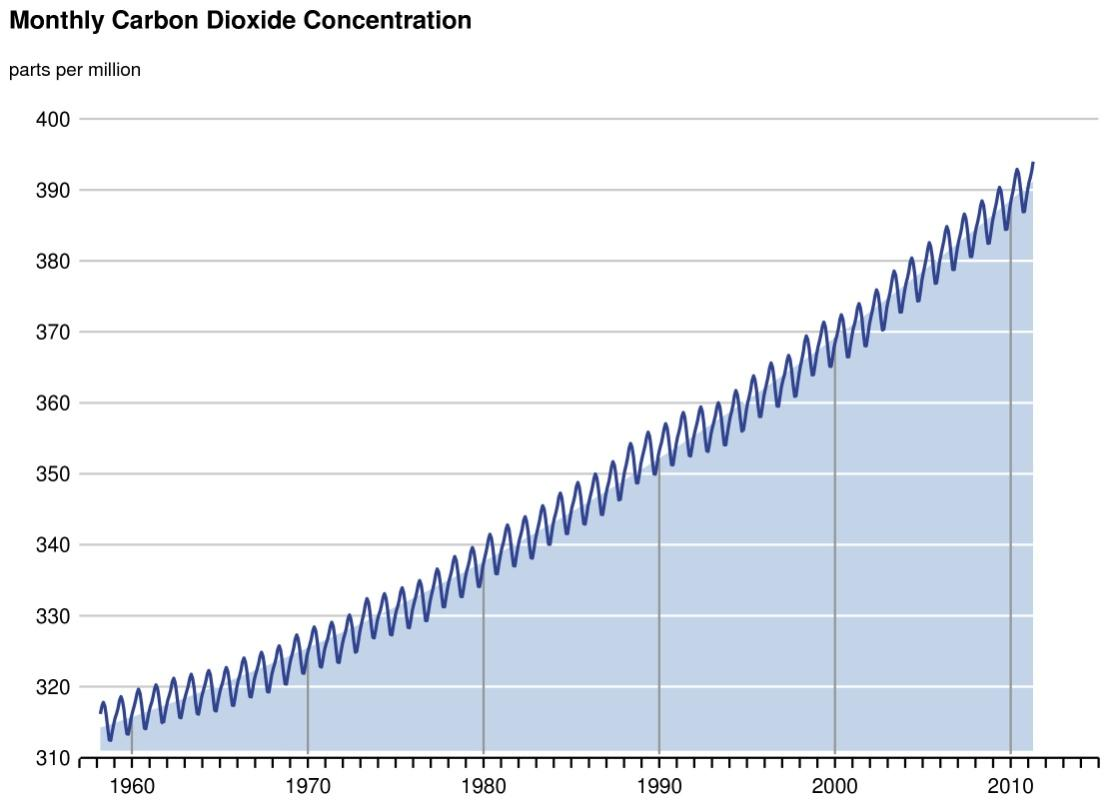 This graph labeled “Monthly Carbon Dioxide Concentration” illustrates the issue. It shows the increasing concentration in parts per million of this gas over the past 50 plus years. It is known as the Keeling Curve and was started by a graduate student in the 1950’s when precise spectroscopic instrumentation became available for the first time to allow the direct measurement of this gas.

This analytical procedure is used by many scientists at different locations around the globe and increased levels are found everywhere.

The levels today are far higher than at any time in the past 800,000 years based on analysis of ice cores in both the Arctic and Antarctic. These ice cores were obtained by drilling into the ice sheets or glaciers and are up to two miles long.

In fact, in an Op-Ed piece in the New York Times [12/13/12] we have a compelling case for a call to “photovoltaic” arms. It was written by David Crane, president of NRG, an energy company, and Robert F. Kennedy Jr., a senior attorney for the Natural Resources Defense Council and President of Waterkeeper Alliance.

It goes on to state that the price of solar panels have dropped 80% in the past five years and that the electricity they provide is at or below the retail cost in 20 states including many in the Northeast!

What are we waiting for?

To ignore all of this data we do so at our grandchildren’s peril.