Menu
You are here: Articles2022 ICSUSA ARTICLESMay 2022 - PPM Means a Lot in Climate Science: Just Like in Wine or Cooking

PPM Means a Lot in Climate Science: Just Like in Wine or Cooking

We may hear about parts per million [ppm] of methane, or carbon dioxide, or some other component in our environment but how can we relate to this? What does it mean? It doesn’t sound like much in quantity; but its impacts may be anything but.

One way to try and get a handle on and understand what is one ppm, is this example: go 16 miles in one direction, turn around, and come back one inch. That is about 1 ppm. This is calculated as follows: 12 inches/foot x 5280 feet/mile x 16 miles = 1,013, 760. Thus one inch = approximately one ppm in this example.

Recent analytical equipment has looked at the aroma and flavor molecules in wine and results show that many chemical agents are at the ppm level, and sometimes even less, and are a powerful contributor to the desirability, flavor and character of a wine. The same applies to cooking where a small amount of a particular spice enhances significantly the flavor of the food.

And, so it is with ppm levels of carbon dioxide [CO2]. The current level of CO2 in our atmosphere is 417 ppm, and while it seems like a small amount, it has an outsized impact: just like some components in a wine or a quality food dish. It has heat absorbing properties that influences Earth’s climate. And with the huge quantities we humans emit, over time, it has an enormous impact.

A telling graph of CO2 levels over the past 800,00 years [courtesy of earth.org] shows how extreme the current levels of this greenhouse gas [GHG] are. Over this entire time period the CO2 levels ranged from about 170 ppm during the glacial periods to 280 ppm during the inter-glacials, like the one we are in now. We have added a lot of spice to our brew.

So what do we do? Burn less fossil fuels; yes, but this is proving difficult. People are accustomed to doing what they have been doing for a long time and sufficient government policies have not been passed in Congress. Change is hard. Plant trees; great idea as nature has a wonderful way to capture CO2 from theatmosphere via photosynthesis. But unfortunately, we are cutting down, or losing in wildfires, large portions of the forests that would normally take CO2 out of the air.

One engineering approach being investigated and funded to the tune of billions of dollars, is to take CO2 directly out of the air [direct air capture - DAC], liquify it, and inject it underground. This process has a variety of names and variations and is frequently referred to as carbon capture and storage [CCS]. The money in part, is coming from the infrastructure bill passed in Congress last year as well as venture capital.

One company involved in this approach is Climeworks. The photo here is of their “Orca” experimental pilot plant, nestled in snowcapped mountains, and it came on-line within the past year. It is located in Iceland because of the availability of cheap thermal energy and favorable underground geology. 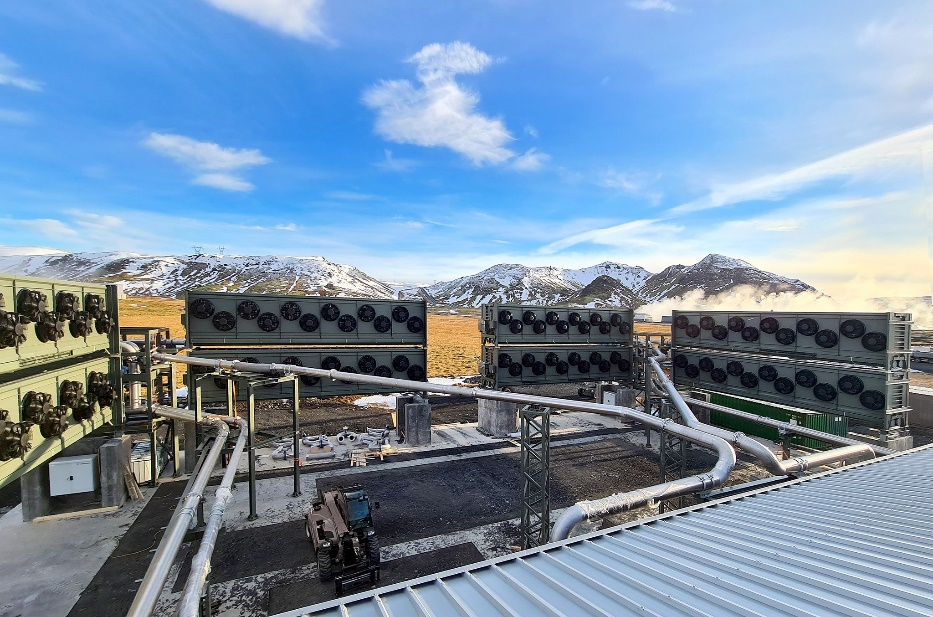 It is a bold idea that uses perhaps 100 large fans in this facility to draw ambient air in through a series of filters that absorb a large percentage of the CO2 in the gas stream. The adsorbed CO2 can be removed, compressed and injected underground into a geological formation that reacts with the gas and, theoretically, will sequester it permanently.

The issue this pilot plant is trying to address is how to accomplish this in a way that makes it financially viable. At the present time it is not. It costs over $600 per ton for CO2 removal and this pilot plant only has the capacity to remove 4,000 tons per year.

Not emitting CO2 in the first place is the best way to go but that is just not happening. So far at least.

One way to look at the emission problem is the “bathtub analogy.” See the cartoon [Credit: M. May/Helmholtz-Zentrum Berlin] of a bathtub with inputs [emissions of CO2] from the combustion of fossil fuels, and with carbon sinks such as DAC and natural processes such as the oceans, forests, etc.  The diagram shows in simple terms that we must reduce the inputs of this gas into our environment, or improve the carbon sinks, or else we will exceed our carbon budget within the next decade with major climate happenings and our tub will overflow. 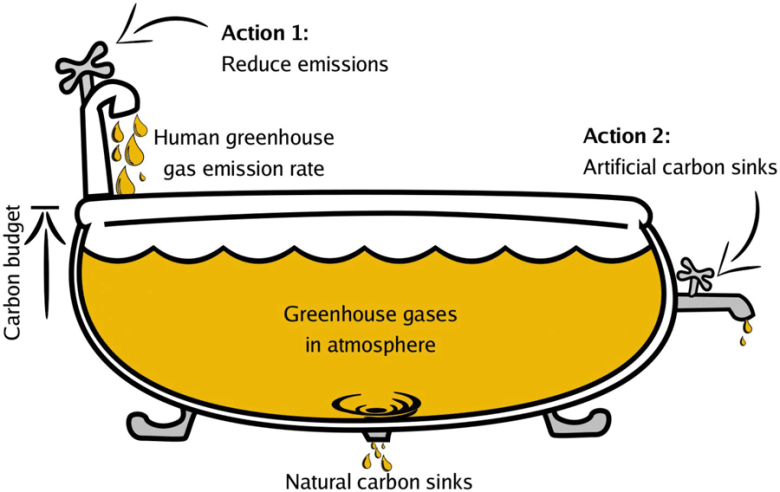 And then we have the artist Zara Forman who “travels to remote regions of the world to collect images and inspiration for her work.” She has traveled to Greenland, Antarctica, and Arctic Canada and flown with NASA on mapping expeditions. “She uses art to convey the emergency of climate change” per Timothy Dhalleine. The image here of Zaria by her drawing, is titled Greenland #71. soft pastel on paper.

And of course, we can’t forget the scientists who collect and chart and interpret the climate data and are alarmed by what they see. All of their publications in peer-reviewed literature and in the reports from the UN IPCC have not moved the needle very much in terms of getting governments to recognize the seriousness of the climate problem. In frustration, recent protests [Scientist Rebellion] by these scientists in the UK [see photo, SOPA Images Limited] included supergluing their hands to the doors of businesses and banks to try and gain awareness of the issues.