Menu
You are here: Articles2020 ICSUSA ARTICLESOctober 2020 - The Science of Climate Change and the Role of Greenhouse Gases

The Science of Climate Change and the Role of Greenhouse Gases

Let’s take time for the moment to review the science: the science of climate change and the fact that itis happening today and is mostly caused by “us.” It really comes down to the fact that Nature just follows certain chemical and physical laws or processes. It is in Nature’s DNA and we can’t change that.

The chemical equation illustrated here shows the chemical process that occurs with the combustion of methane, the principal component of natural gas, with oxygen. The result is the production of carbon dioxide [CO2], water [H2O] and energy [heat].

The solid round circles represent the atoms involved. So for methane we have a central carbon atom connected to four hydrogen atoms. For oxygen we see that each of the two molecules illustrated consists of two oxygen atoms bonded to each other. When heated these molecules [reactants] do a “dance” and find new partners that result in the formation of CO2 and H2O.

The energy obtained in this way grills our chicken on a gas fired grill, heats our homes and is also used to produce electricity and more. Other sources of energy that contain carbon such as oil, coal, biomass [wood, crop residue, dung, etc] follow the same chemical pathway. And, they all emit CO2 into the atmosphere.

It should be noted that unburned methane itself is also a greenhouse gas [GHG] and is many times more powerful than CO2 itself. This is why the fossil fuel industry is being encouraged, and in some case regulated, to reduce incidental emissions of methane, or leaks, as a part of their operations. The results of these efforts so far have not been good, especially with this administrations’ deregulation stance. As a matter of fact methane levels in the atmosphere have risen to record levels.

So now, the next step that unfolds, again as part of Nature’s DNA, is where the problem of global warming develops.

See the image of the sun and its radiation of energy to earth’s surface [Wikipedia] which illustrates the GHG problem. 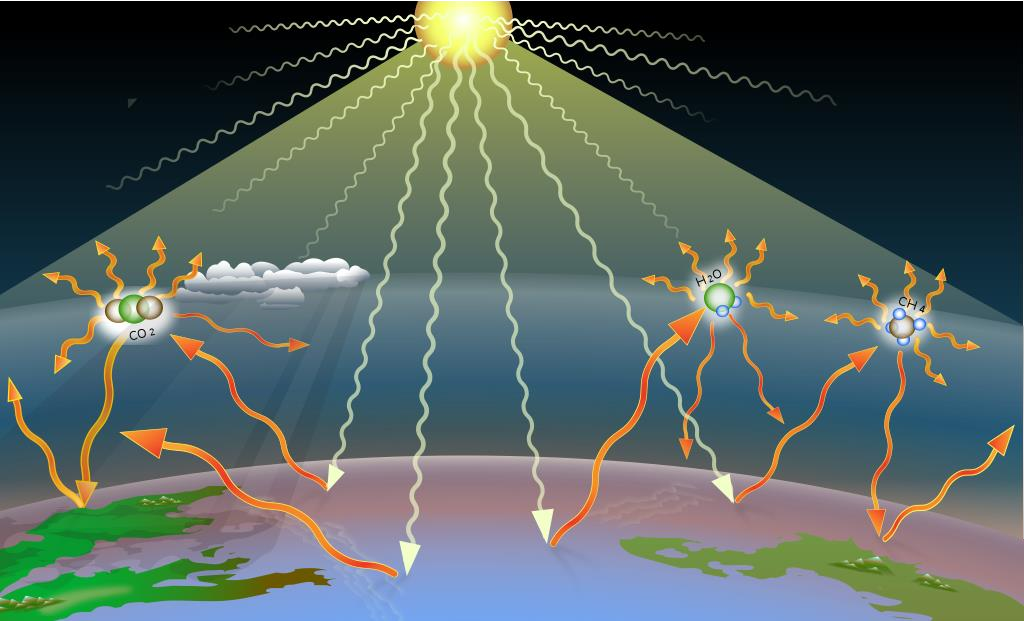 As per Wikipedia, “Light energy (white arrows) emitted by the sun warms the earth's surface, which reflects some of the energy as heat (orange arrows) that warms the atmosphere. Much of the heat, or infrared energy, is captured by greenhouse gas molecules such as water, carbon dioxide, and methane.”

The result is that we now have an energy “imbalance” as seen in this illustration; more energy is being trapped on earth than in the past, with less being lost to outer space. What accounts for this energy imbalance and the resulting increase of earths’ temperature?

It is the fact that the atmosphere today has a different composition than a century or two ago. It now absorbs energy that was normally emitted to outer space. The best data set we have, with direct measurements of CO2 in the atmosphere, is called the Keeling Curve. The data have been collected at Mauna Loa Observatory, Hawaii over the past 60 years and is part of the CO2 Program at Scripts Institute of Oceanography in California. See curve labeled, “Monthly Carbon Dioxide Concentration.”

The left [vertical] axis is in parts per million [ppm] of CO2 and the bottom, or horizontal axis, is in years; 1958 -2020. Today, at about 417 ppm, we can see that there has been a change of about +100 ppm during this 60-year period. We are in new, uncharted territory that our species, Home sapiens, has never experienced before.

And there is more. Ice cores have been retrieved from the ice sheets on Greenland and Antarctica that are up to two miles long. The layers of ice in these cores are basically time capsules containing tiny bubbles of earth’s atmosphere from those times that became trapped in layers of this ice. The deeper one goes on these cores, the older the ice, and the older the bubbles of the atmosphere are from the past.

This black and white photographic image taken of polar ice was in a 2019 show, titled “Climate Archive” at the Photographic Museum of Humanity. Suzette Bousema is the artist and other images of hers can be found on-line. The bubbles seen in this image contain air from these ancient times and are analyzed using special techniques.

Analyses of the composition of these air bubbles have been a long term project for many scientists from many nations and the results are startling. The CO2 data from these cores span about 800,000 years and during that entire time the levels never exceeded 300 ppm. These are direct measurements! And our species is less than 300,000 years old.

Additional research on other proxies of climate [not CO2] suggests that this GHG level is the highest it has been in over 3 million years.

We had better reduce these levels and soon.