Menu
You are here: Articles2011 ICSUSA ARTICLESDecember 2011 - Climate Legacies, Past, Present and Future

Legacy is a term we may hear and see in print from time to time. According to www.thefreedictionary.com site it means: “a gift by will,” “something handed down or received from an ancestor or predecessor.”

Our predecessors from the 1900s’ gave us such a legacy. Even as late as 2011 an “unprecedented” ozone hole developed in the Arctic with continuing ozone holes forming over the Antarctic regions. [See the images from NASA of Earth’s poles.] This was not done on purpose. There was a lack of awareness and understanding about the impact of groups of chemicals, chlorofluorocarbons and hydrofluorocarbons, had on Earth’s atmosphere. 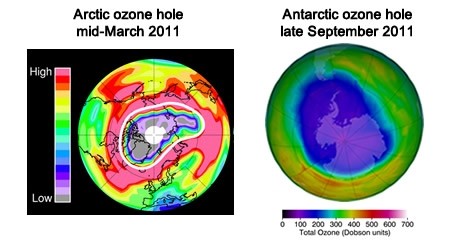 These chemicals consist of volatile molecules and are used as refrigerants in our homes, cars and elsewhere in modern life. When released/leaked into the atmosphere they rise into the stratosphere high above the Earth’s surface where they react with and destroy the ozone layer.

The chemistry is very complex but it is clear that by reducing the ozone layer, increased amounts of high energy solar UV radiation are able to reach the Earth’s surface. This radiation is very harmful and can cause skin cancer and have other deleterious effects on life on Earth.

With some data, incomplete but with research on going, scientists sounded the alarm to policy makers who did rise to the challenge. In 1987 the Montreal Protocol was signed by President Reagan and Margaret Thatcher, and came into force on January 1, 1989. All together, 196 countries have signed the Protocol to limit these and other similar chemicals, and to eventually stop their use. However, the legacy, the gift, stays with us and will for the next half century and more. Until the ozone hole closes peoples from Scandinavia to Russia to Canada to Argentina and Chile will be at risk.

But what about carbon dioxide? Is there a legacy here as well; a gift from us to future generations?

The answer is yes. Let’s take a look.

The three photos below highlight the issue. The train carrying black coal, the oil tanker carrying crude oil and the gas tanker carrying natural gas all have one thing in common: carbon, fossil carbon. All of these carbon forms [solid, liquid and gas] contain latent energy to help power our civilization today. It is the combustion of this carbon, in the presence of oxygen, that produces carbon dioxide with the release of energy to power our cars, trucks, lights and coffee maker.

While all three sources of fossil carbon, both physically and in transport, look very different, when combusted they all produce a gas that one cannot see, smell, taste or feel. These properties of carbon dioxide make it easy to ignore. The triatomic nature of this gas also provides it with another physical characteristic that we cannot sense without instruments: it absorbs infrared energy that would normally be emitted to space i.e., the greenhouse effect.

The lifetime of carbon dioxide in the atmosphere is a continuing subject of study by many groups. The dynamics of Earth’s air, ocean and land and the partitioning of this gas between them are very complex. David Archer of the University of Chicago states, “A better shorthand for public discussion might be that CO2 sticks around for hundreds of years, plus 25% that sticks around forever.” [ See www.realclimate.org ].

As we continue to consume carbon in its various forms, we are indeed delivering a legacy to future generations. The correlation of carbon dioxide levels, from both ice cores and direct measurements, with increased temperature can be seen in the data provided by NOAA, and chart with graphic design by Woods Hole Research Center, MA.

On November 9, 2011, the Energy Information Agency released a report [available on the Web] titled, “World Energy Outlook.” It goes on to state: “On planned policies, rising fossil fuel use will lead to irreversible and catastrophic climate change. It further states: “…we are on an even more dangerous track to an increase of 6 degrees Centigrade [11 degrees Fahrenheit]….Delaying action is false economy: …” See graph. 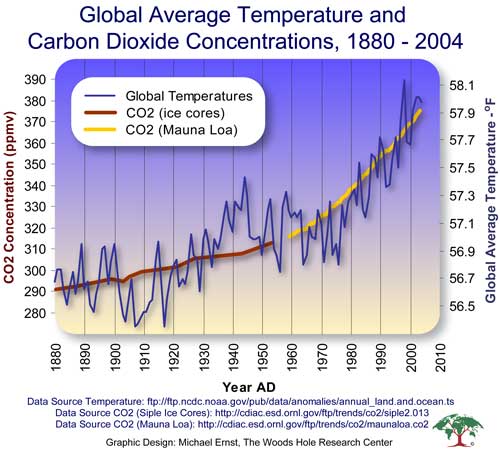 In a final note, the U.S. Department of Energy earlier in November 2011 announced that the global output of carbon dioxide took the biggest jump ever in 2010 and that Chinese emissions now exceed the U.S.’s by 50%.