The “Plant Hardiness Zone Map” issued earlier this year by the Department of Agriculture was the first revision since 1990 and revision it is. See map of U.S. below. More legible regional, state and county maps are available on the web.

In just about all areas of the country the climate has warmed significantly so that zones have changed by up to one number or more. In addition, two new zone numbers at the warm end have been added to the map; zone 12 [50-60 degrees F] and zone 13 [60-70 degrees F]. 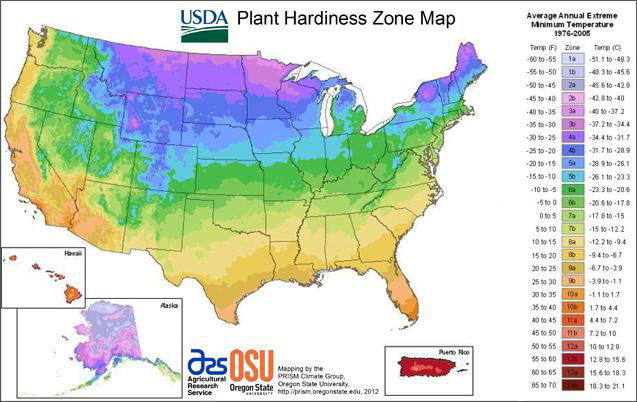 Nature is talking to us. Our climate is changing. It’s getting warmer.

In a more temperature stable world we would expect the number of record high and record low temperatures to be about equal. The “pie charts” from NOAA below illustrate this. This expectation of 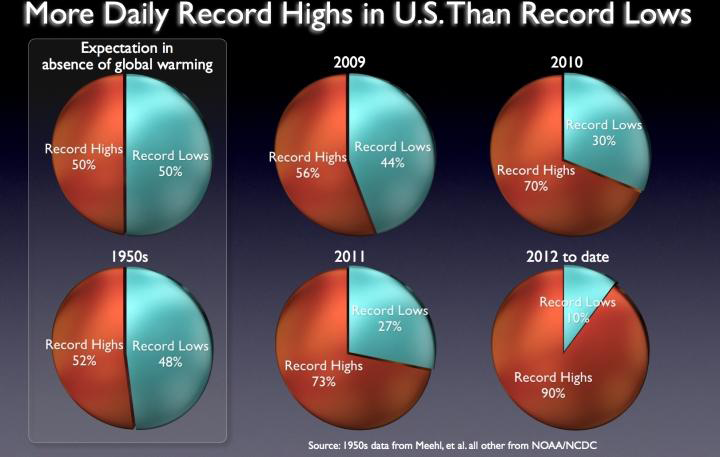 The overwhelming consensus among scientists is that greenhouse gases [GHG] are responsible.

But there is some silver lining to this cloud of GHG being emitted into our atmosphere and we can see this in the Energy Information Agency [EIA] bar chart here that was recently published [July 30, 2012].

The “historic” numbers from 2005-2011 represent 37 actual coal-fired plant retirements that have already taken place. The “planned” retirement of another 175 plants in the 2012-2016 timeframe is a very positive occurrence. These latter generating plants supply a total of 27 gigawatts of electricity or the amount equivalent to the output of about 27 average sized nuclear power plants.

1,387 coal-fired generating units in the U.S. still remain, however, and continue to emit large amounts of carbon dioxide per unit of energy delivered, along with mercury, toxic sludge and other pollutants.

These 175 “planned” retirements are likely due to three converging factors.

The first is cost. The large amount of hydraulic fracturing that is occurring in the Marsellus Shale in the northeast and other sub surface rock strata elsewhere in the U.S. is resulting in a large increase of cheap, plentiful natural gas supplies. This cheap supply makes it less economically viable to generate electricity in these oldest and dirtiest coal burning plants.

Indeed, natural gas accounted for 28.7% of total electricity generation in first quarter of 2012 compared with 20.7% during the same quarter last year. This is a huge change in this industry in such a short period of time.

EIA is predicting that coal production at mines will fall more than 10% this year. Utilities across the country are trying to store growing piles of unused coal and some legal disputes are occurring as utilities try and cancel contracts and/or defer deliveries.

A second factor in this energy mix change is the proposed regulation from EPA that imposes a limit of 1,000 pounds of carbon dioxide that can be emitted per megawatt-hour of energy produced. This limit applies to new fossil fuel burning plants only, but for coal, would require significant additional costs and new engineering solutions. Natural gas plants easily meet these requirements.

A third factor is the declining cost of electricity from both wind and solar generating facilities. According to a Letter in the New York Times, July 30, 2012, “the Michigan Public Service Commission reported in 2012 that electricity from new wind farms costs less than half as much as from new coal-fired plants. It goes on to state that the EIA “said in June 2012 that wind energy’s cost is expected to continue to fall.”

With solar photovoltaic costs also becoming competitive along with wind energy, we could make this changeover now and wean ourselves away from fossil fuels, reduce our foreign trade imbalance and increase our national security.

Why not just do it? We could then stop privatizing the profits and socializing the costs of burning fossil fuels.