“OK Houston, we’ve had a problem here.” This is the actual quote by astronaut Jack Swigert to Mission Control on April 13, 1970, during the Apollo 13 spaceflight, two days into their flight to the moon. They had discovered they had had an explosion that crippled their spacecraft as they neared the moon. Over the next four days millions of people around the world anxiously watched, as American ingenuity,creativity, and luck brought them back home safely.

A modern version might be “OK Earth, we have a problem.” We have a looming carbon bubble that needs to be addressed in the form of carbon dioxide [CO2] emissions. The known deposits of fossil fuels [coal, oil, and gas] must not, and cannot, be burned. If we did, our planet would not be habitable as we know it.

To keep Earth’s temperature from increasing more than 2 degrees C, or about 3.6 degrees F, most of these fossil fuels must be left in the ground.

These are called stranded assets and will eventually affect the value of every fossil fuel company.

See the illustration titled “Carbon Bubble” from the Carbon Tracker Initiative 2013. The large circle shows the total amount of CO2 emitted if all of the known fossil fuel reserves are burned [2,795 billion tons of CO2].

The smaller circle shows the total amount of fossil fuels that can be burned [565 billion tons of CO2] and still keep Earth’s temperature from increasing more than 3.6 degrees F. Thus, we have about four times more fossil fuel reserves than we can actually use. 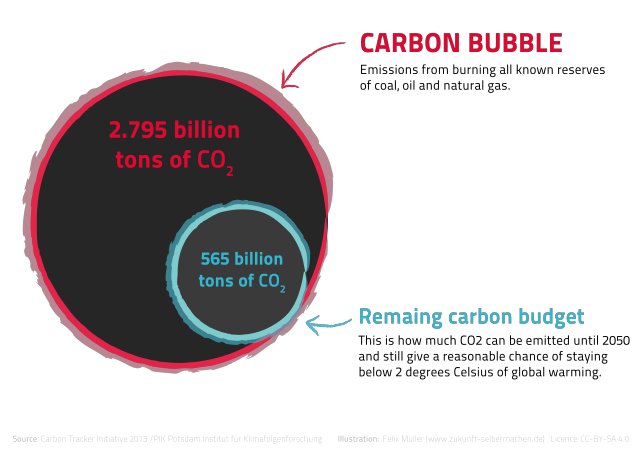 But there is a solution.

Renewable energy is the key to avoid the most serious effects of Earth’s growing fever.

Part of this solution is blowing in the wind. And this is where the Clean Disruption story continues. See the November 5, 2017 photovoltaic discussion [Climate change and the great disruption] in www.icsusa.org. 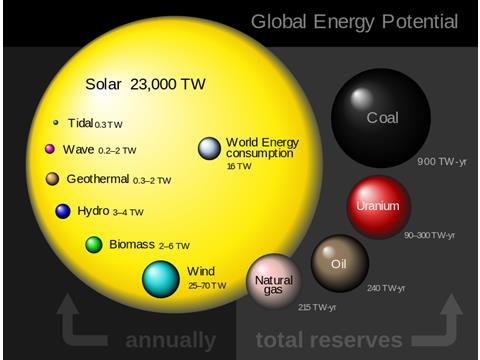 So let’s take a look at the illustration labeled “Global Energy Potential.” Inside the largest circle is “SOLAR 23,000 TW” or 23,000 trillion watts. This is the total amount of solar energy received by Earth from the Sun in terawatts [TW]. Just below and to the right is, “World Energy consumption 16 TW.”

So, the Sun is sending us over 1,500 times as much solar energy as we currently consume!

The six smaller circles within the large circle are all renewable sources of energy. The largest of these six is wind energy, and in some combination, these renewables can significantly reduce our carbon emissions. However, by a large measure, solar is the key.

Three of the four circles to the right are fossil fuel reserves [coal, oil, natural gas] and their potential to meet civilizations energy needs. The remaining circle is Uranium, used for generating nuclear power.

Clearly, Solar and Wind must become the majority of our power generation, and soon; Very soon.

In the horizontal bar chart, “US Unsubsidized Levelized Cost of Energy ...”, the cost comparisons make this abundantly clear. Wind and solar derived energy are cheaper than any other source of power including nuclear. And the technology for both of these renewable sources continues to improve resulting in more power produced at lower cost.

Note that the cost of coal generation is extremely high. 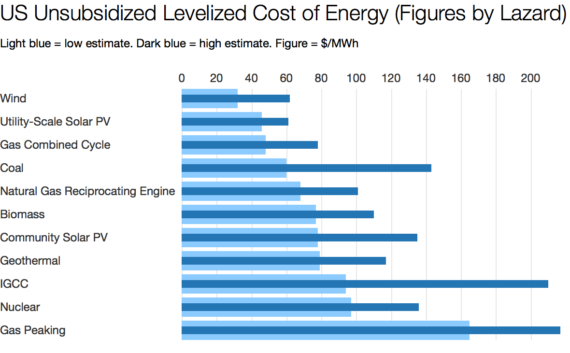 Scotland has played a major role in the North Sea oil and gas extraction efforts over the past several decades. It is now using its expertise in deep water exploration in developing the first floating wind power “farm” in the world. See illustration of three floating wind turbines using different technologies for mooring the turbines to the ocean floor in deep water. 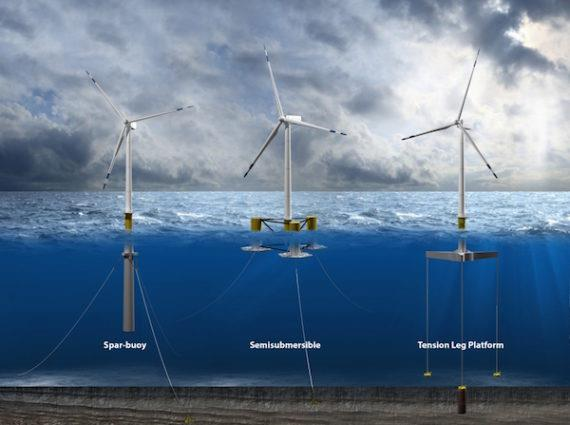 In shallower parts of the North Sea, hundreds of wind turbines are moored directly to the ocean floor between the U.K. and Europe and are producing huge amounts of power for the continents’ electric grid.The pie chart, “Wind energy globally” shows wind turbine installations planned for the 2017-2020 period. China has the most ambitious plans, by far, with 38% of the total. The EU28 countries come in second at 22% with the U.S. a distant 3 rd or 4 th at 16%. 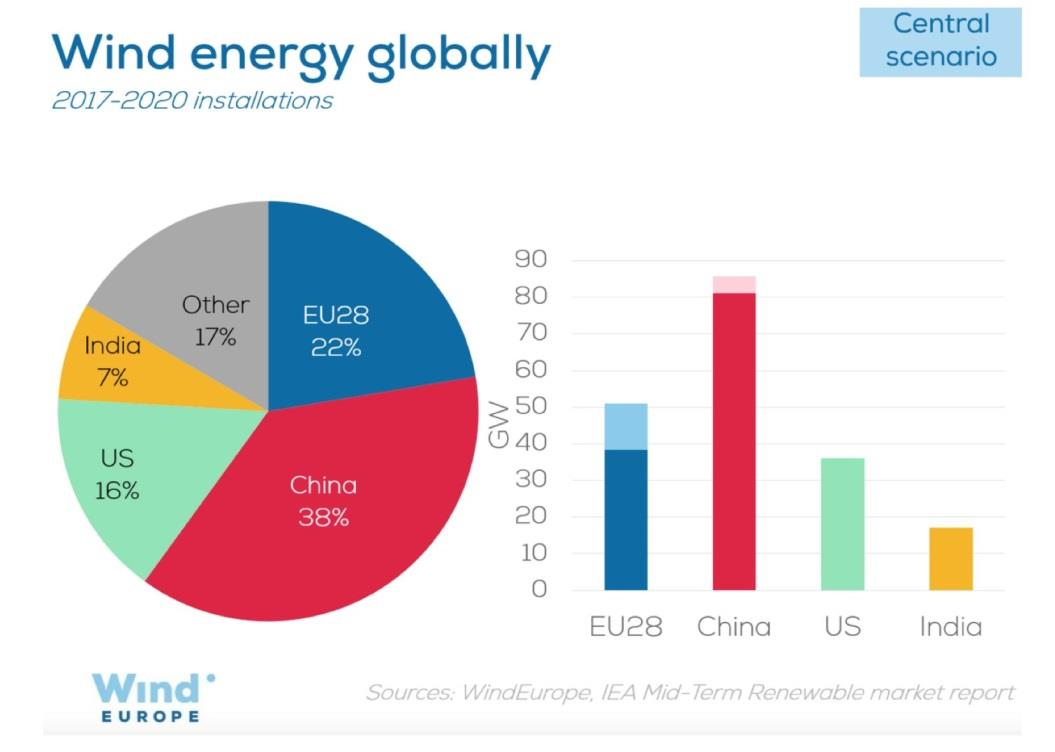