There are two threads to this story, that will be woven together, but let’s start with the first thread, Maya Lin.

We may know Maya from the public recognition she received after winning the public design competition for the Vietnam Veterans Memorial in Washington D.C. Maya Lin was only 21 at the time, and still an undergraduate at Yale, when her design won and was accepted out of 1,422 submissions that were made. Her intention was to create a wound in the earth, to symbolize the pain caused by the war, and with the passage of time the initial violence and pain would heal [Wikipedia].

This memorial is now one of the most visited sites on the National Mall in D.C.

Her sculptures and landscape installations [earthworks] help us to see “the balance and relationship with nature and what it means to people.” Her work “originates from a simple desire to make people aware of their surroundings, not just the physical world but also the psychological world we live in” [Wikipedia].

Now for the second thread of this discussion.

Analyses of recent satellite photos show large swaths of forest along the east coast of the U.S. that are dead and/or dying. Visible from space, some tens of thousands of acres of coastal forest habitat have been converted to shrub-land or marsh habitat. This unique land cover of standing dead and fallen tree trunks was gray in color and dubbed, “ghost forest.”

See image from NASA/U.S. Geological Survey of a portion of the east coast of North Carolina including the Alligator River National Wildlife Refuge, right of center, along with Nag’s Head and Kittyhawk along the Atlantic Ocean shore. Gray areas are the ghost forests. 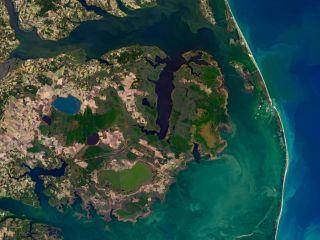 The major portion of the die-off occurred after a five-year drought, which was then followed by a hurricane [Irene] in 2011 that inundated the land under a six-foot wall of sea-water. This combination of extreme events, according to Dr. Emily Ury from Duke University, was “not normal. Large patches of trees are dying simultaneously … and it is not just a local issue.” Rising sea-levels, and salinity, can penetrate well inland and can lead to dramatic die offs and loss of coastal forests.

Dr. Ury is the lead author of a peer-reviewed paper published 04 April 2021, titled “Rapid deforestation of a coastal landscape driven by sea-level rise and extreme events.” 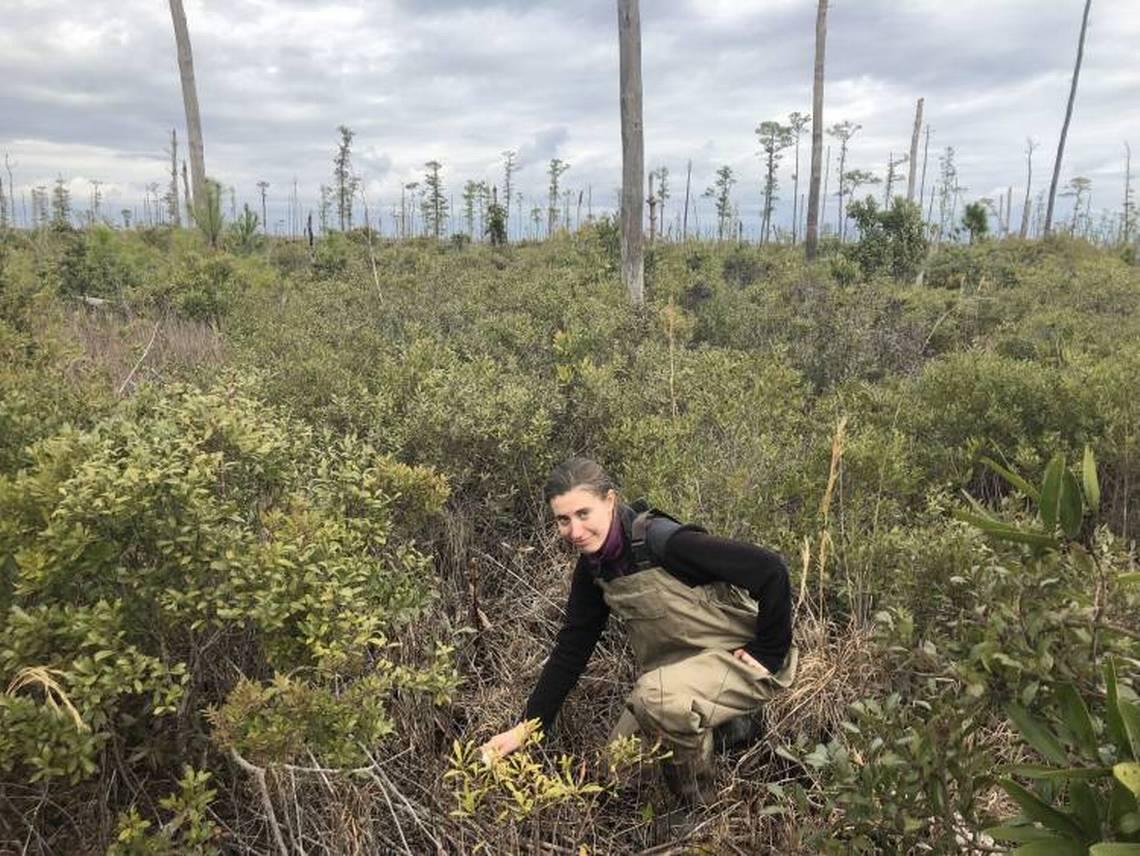 So now let’s connect Maya Lin with the ghost trees and ghost forests along the Atlantic Coast.

The artist recently completed an installation titled, “Ghost Forest” in Madison Square Park, Fifth Avenue and 23rd Street, in Manhattan which opened May 10, 2021. It will remain on view through November 14, 2021. It is part of a long-term project, “What is Missing” documenting ecological loss in the U.S. along with other places.

She “brings into focus the ravages of climate change on woodlands around the world”; specifically Atlantic white cedar trees. [Madison Square Park Website]

The installation in the park consists of dozens [49] of 40-45 foot tall cedar trees and is intended to show how climate change will, and has in some places, changed forest landscapes. Visitors may feel “a sense of loss, as well as hope” along with the “haunting sense of beauty and how majestic and in awe we should be of these incredible trees” [Maya Lin].

These trees all died as a result of salt-water intrusion and were harvested with the permission of the land-owner in New Jersey’s Pine Barrens. They were then “planted” in the park amidst other live trees with the stark contrast between them.

So what we have is a confluence of factors that further complicate, intensify and contribute to climate change; these include sea level rise, salt water intrusion, storm surge, dead trees no longer fixing carbon and taking carbon dioxide [CO2] out of the atmosphere, and then as they decay putting CO2 back into the atmosphere which results in more warming and round we go again.

One could call this, literally, a perfect storm. 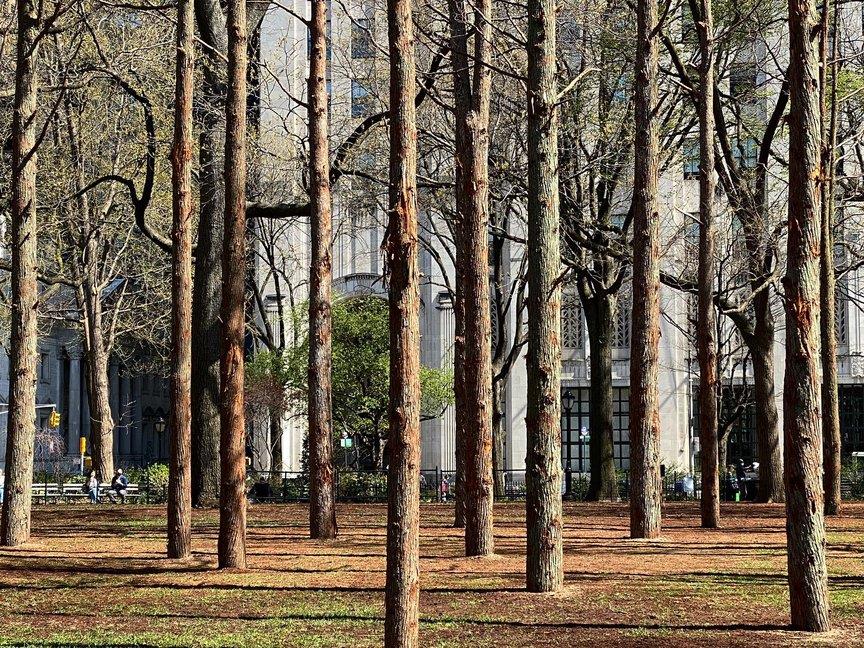 Sea level rise along parts of the east coast of U.S. are expected to be about 5 millimeters [mm] or about ¼ inch this year. Place five dimes on top of one another and this would be about 5 mm. And this will happen next year, and the next, and … .

Transportation accounts for a significant amount of global emissions of carbon dioxide that contributes to sea level rise. But change is happening and the transition, the clean disruption, from fossil fuels use to renewables and electric vehicles [EV’s] is underway. The circular pie chart labeled “April 2021 Germany Passenger Auto Registrations” is telling. Almost 230,000 new cars were registered in Germany in April and some 38% were either hybrids [plug-less], plug-in hybrids or full battery EV’s. This is almost triple the amount from 2020.

The energy transition is underway. 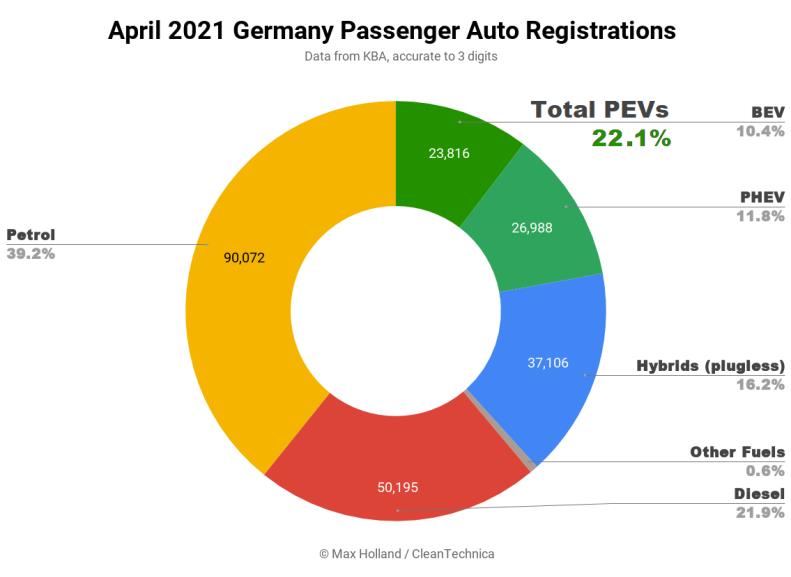