What are we doing?

The oceans, which cover about 70% of the Earth to a depth of two miles, are changing. It would seem impossible that we, all of us, could actually change some of its basic properties ... but we are.

The three curves below from NOAA, labeled “CO2 Time Series in the North Pacific” tell a powerful story. The chart may look busy but it is really straightforward.

The upper long running seesaw curve gives the measured atmospheric concentrations of this greenhouse gas [GHG] from 1958 through 2012. The units on the left side of this chart show concentrations approaching 400 ppm.

The relentless rise of this gas in the air, results in a steady increase in the amount of this gas dissolved in sea water. See middle jagged curve from about 1988 also to 2012.  This makes sense, and is what one would expect to happen, because the atmosphere with its increasing amount of CO2 transfers some of this gas to water as the wind continuously blows across its surface. 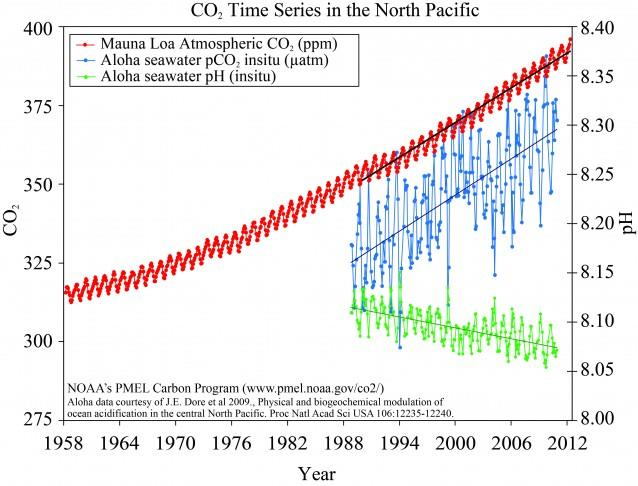 In one way this is a good thing as the oceans absorb about 25 - 30% of the primary GHG we emit when we burn fossil fuels. This acts to reduce the warming impact of this gas on global air temperatures.

But the real issue, with an adverse impact, is shown in the lower and third curve in the NOAA diagram.  This is the pH, or level of acidity of the ocean, and the curve is trending down towards a more acidic pH.

This is not a good thing. As a matter of fact, it is bad, very bad for much of life in the ocean.

So how does this process work? OK, here is a bit of chemistry to illustrate what is happening. 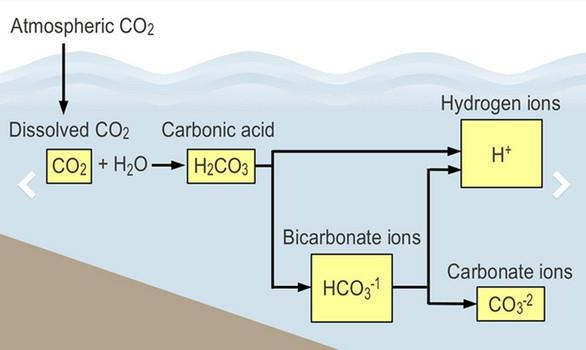 The “Diagram of Ocean Acidification” [unlabeled] is from NOAA and was carried in examiner.com on March 22, 2016. The top left of the diagram is labeled “Atmospheric CO2”, and, following the arrow down leads us to “Dissolved CO2.” As we move to the right we see that when CO2 dissolves in sea water it forms “Carbonic acid”, the same chemical present in any carbonated beverage we buy.

Again, following the arrow to the right leads us to “Hydrogen ions.” This is the acidity that has such a negative impact on shellfish and other ocean dwellers. The lower two boxes have some additional information on the chemistry of CO2 in water but can be ignored for the purposes of this discussion.

So what’s the problem? The issue is that the higher acidity dissolves the calcium carbonate that makes up the shells of many creatures in the ocean; crabs, lobsters, and all other shellfish and more. It basically changes the balance of minerals in the water.

It is known that acidic rainwater [from CO2 and other gases] falling on statues made of limestone [calcium carbonate], slowly causes them to lose detail and become eroded with time. See photo of statue of a religious figure from a church in Europe. 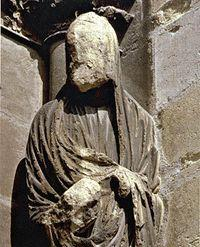 With current amounts of CO2 still increasing in the atmosphere, and at an accelerated rate, how can one understand and study what the impacts will be on ocean communities? A natural laboratory of some size is needed and, indeed, one has been found near the island of Ischia off the coast of Italy.

In several recent studies published in the Proceedings of the National Academy of Sciences, lead author Kristy Kroeker studied the impacts on marine life from underwater volcanic vents emitting CO2. In part this resembles what is, and what may happen, as the GHG from the combustion of fossil fuels dissolves in the oceans. The results are startling.

The sea creatures had less variety, were smaller and different, with implications that could have far-reaching effects up the food chain. Note photo, “ACID OCEAN,” showing a very different seascape. 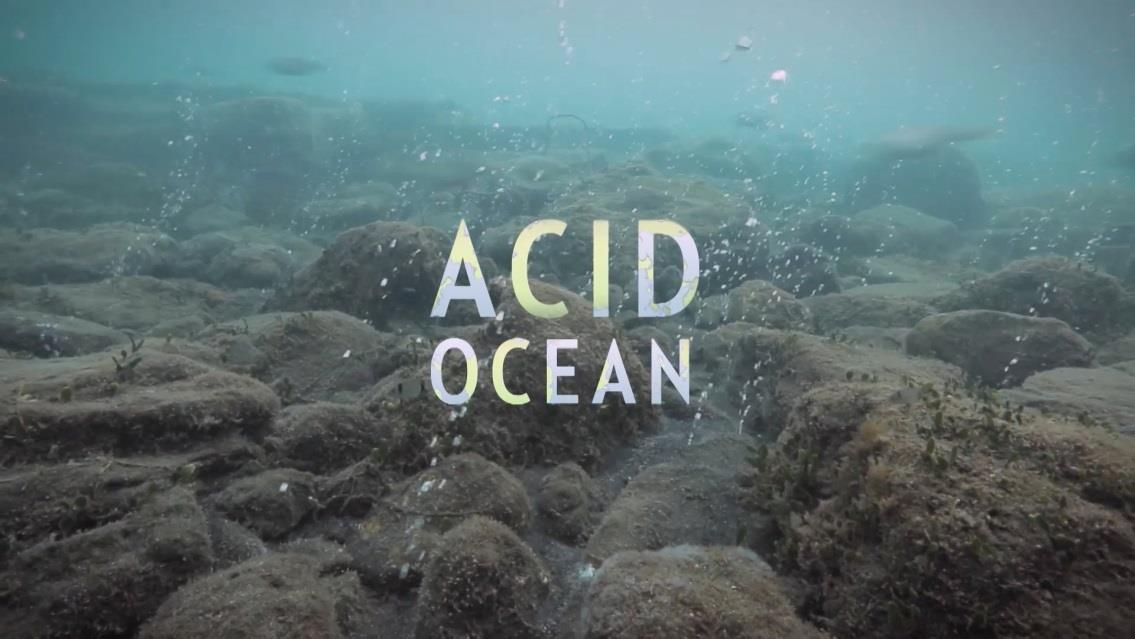