Menu
You are here: Articles2019 ICSUSA ARTICLESMarch 2019 - Climate Change and The Power of One

Climate Change and The Power of One

Those of us of a certain vintage might remember a memorable photograph/video from June 5, 1989 of an incident that took place on the north side of Tiananmen Square in Beijing, China. It was the day after the military used deadly force to break up a protest nearby. As a long column of tanks approached down the middle of a broad avenue, an unarmed, unidentified man calmly stepped in front of the lead tank forcing it to a stop. As the tank tried to go around him, the man moved with it in order to remain in front of the tank in a non-violent action.

Photos and a video of this event [Wikipedia, “Tank Man”] were “smuggled out to a worldwide audience. Internationally, it is considered one of the most iconic images of all time.”

Another, more recent image from September 2018, also stands out as a powerful visual in a peaceful protest. The image here may be more subtle in the sense that no tanks or armed police are present. But the cause here is for “Climate Justice.”

Greta Thunberg, who has been in a recent climate article published in this paper, positioned herself in front of the stone edifice of Sweden’s Parliament. Based on her study of climate change, and reports from the U.N. International Panel on Climate Change [IPCC], she is alarmed that the powers that be, both political and business, are not taking the threat to our planet seriously. It is business as usual [BAS].

The image here [medium.com photo] of the then 15 year old student, protesting all by herself during school hours is powerful by itself. 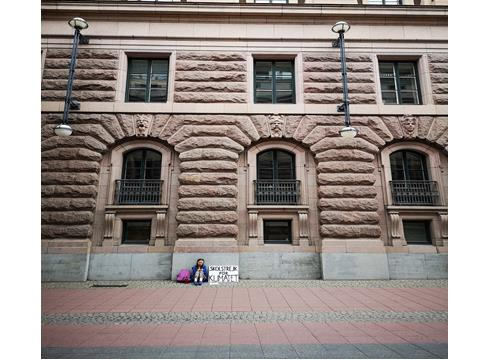 Her modesty, sincerity, and articulate presentation of the dangers of climate change and a warming planet, and to her future, inspired the U.N. Council of Parties [COP24] to give her the platform to speakto a worldwide audience. The meeting was held in Katowice, Poland in December 2018. She spoke for only 3 1⁄2 minutes but captured the whole issue of climate change and the lack of responsibility of our leaders to address it so that she, and tens of millions of other young people, have a future.

Now 16, she was also invited to Davos, Switzerland in January 2019, to give a similar address to an audience of business leaders, the wealthy and many political leaders. To keep her carbon footprint small and to be consistent with her beliefs, she traveled from Stockholm to Davos by train. It took about 32 hours. She shunned an extravagant hotel room and slept in a tent. Meanwhile 1,500 private jets landed with other attendees.

Her actions have since sparked interest and ignited protests around the world including the U.S. The theme is basically keep fossil fuels in the ground, stop CO2 emissions, move to clean renewable energy, now.

In January 2019 when the new Congress was being sworn in, many students urged our legislators to move on a “Green New Deal” which centers around clean, renewable energy. See photo [Michael Brochstein/SOPA/Images/LightRocket] of students and youths in hallway of Congress. 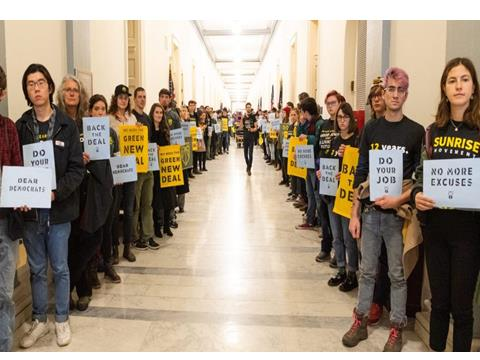 The UK has seen a large number of protests in many cities throughout the country recently. “Thousands of young people in Britain” [NYTimes 15 February 2019] left their classrooms to take part in “a growing movement to protest the lack of action on climate change.”
See photo [Getty Images] of youths with prominent sign, “There’s No Planet B.” 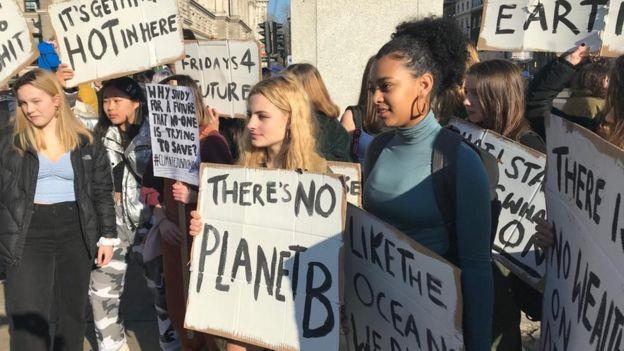 This global movement is known as “Youth Strike for Change” with protests from Tasmania to Europe. They want climate change to be treated like a crisis it is, by their politicians. The recent IPCC report supports their contention that climate change is serious, dangerous and needs to be addressed now. We have just 12 years to avoid the more serious consequences of catastrophic climate change.

More than 10,000 youths in Leuven, Belgium have skipped school for the fifth Thursday [2/7/19] in a row. See the AP Photo, [Geert Vanden Wijngaert], with signs in Dutch or English with two that say “What I stand for is what I stand on.” Some climate change deniers claim that these events “are being manipulated by politicians and environmental organizations.”

Indeed, one Belgian Environment Minister was forced to resign after she said she had security confirmation that these recent demonstrations were staged as a plot against her. 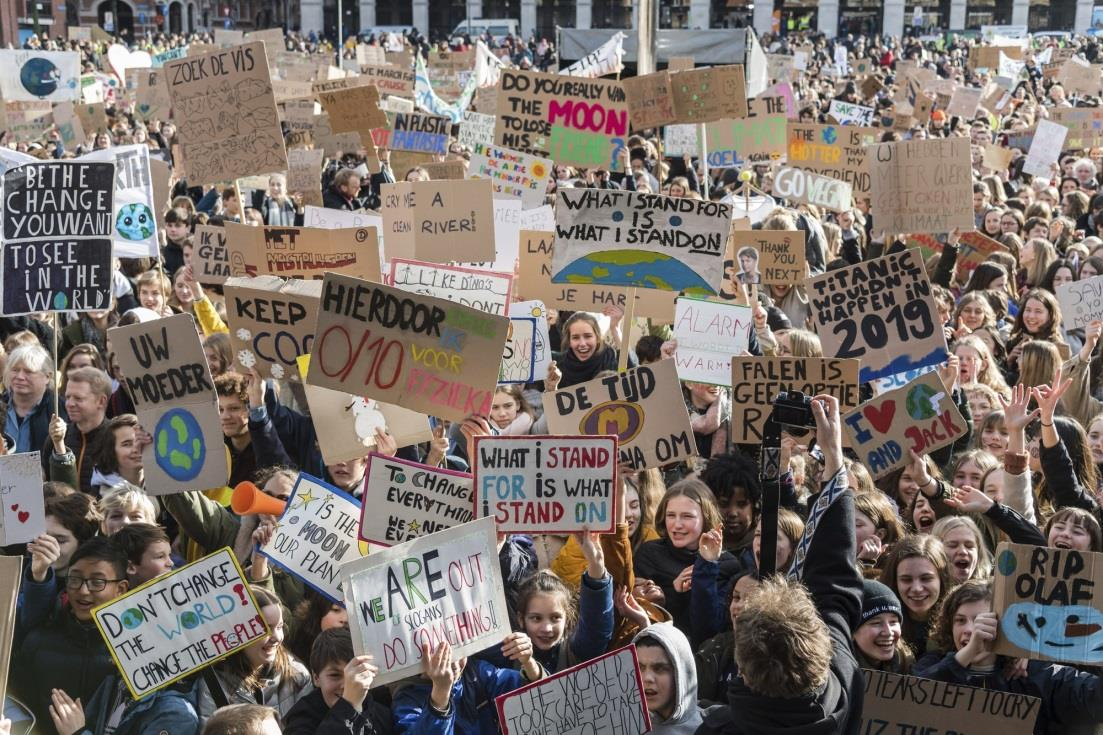 The photo [Ana Fernandez/SOPA/Images/LightRocket] of a sign, “it’s Getting HOT in HERE!” is of a rally in The Hague, Netherlands on February 7, 2019 where many more than the 3,000 students expected, turned out. 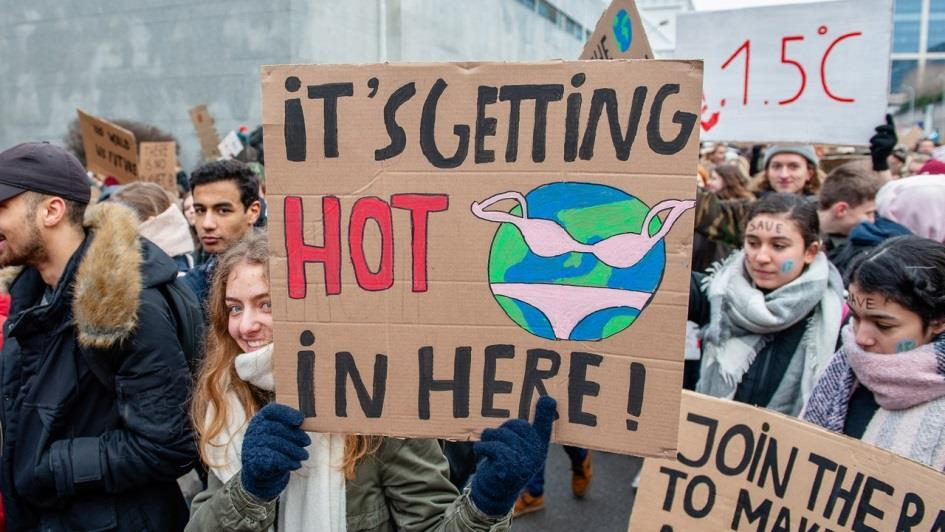 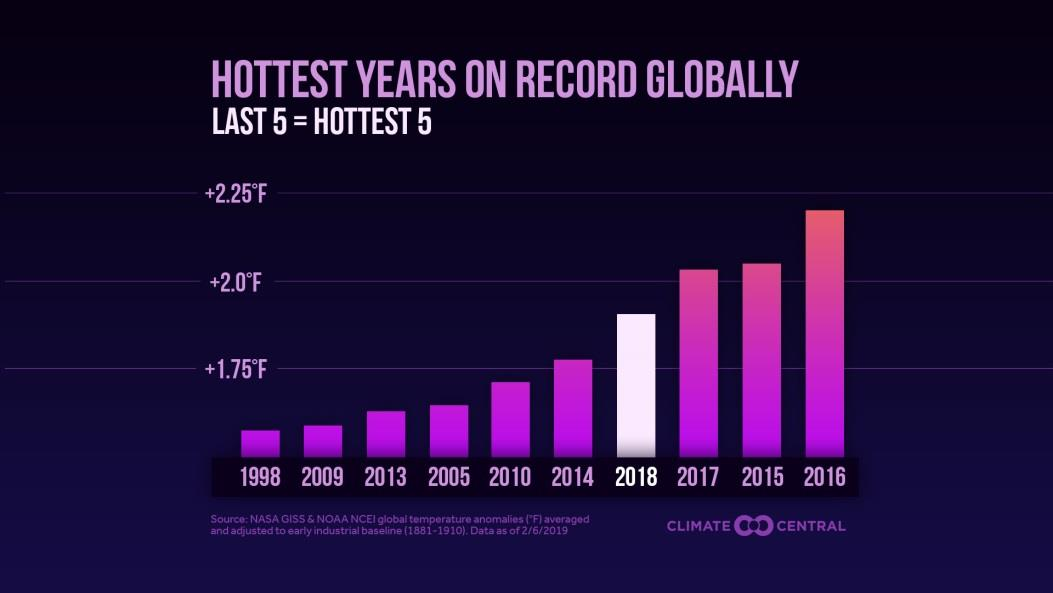