Menu
You are here: Articles2012 ICSUSA ARTICLESJuly 2012 - Towards Energy Independence: Blowing in the Wind

July 2012 - Towards Energy Independence: Blowing in the Wind

As the United States slowly begins moving forward, and diversifying its energy production away from heavy reliance on both imported and domestic fossil fuels, these words come to mind:

Joan Baez, Bob Dylan and others sang this song in the 1960’s at a time when our country faced dissent and critical choices just as we do now.

The combustion byproduct from all fossil fuels, as well as biomass, is carbon dioxide. For well over a century its physical greenhouse gas [GHG] properties have been known, and demonstrated, and is a major contributor to climate change.

Efforts to reduce the emissions of this gas are beginning and the momentum is picking up.

The map of the U.S. illustrates just five different sources of power used to generate electricity. A significant amount of hydropower [dams] is shown in the northwest; areas of large photovoltaic installations are shown in the southwest; major wind power farms are shown in the middle portion of the country; coal plants are situated throughout the U.S. with a large concentration in the southeast; and finally nuclear installations in the north central and northeast portions of our country.

In fact, some of all five kinds of electric generation, and others, can be found throughout the U.S. but this idealized map gives a general sense where they are concentrated.

Let’s look at the pie chart from the U.S. Energy Information Administration [EIA]. This gives the percent of electricity generated by the different technologies available in 2010. Note that the top three sources, coal, natural gas and nuclear, provide about 89% of our needs. This is followed by seven more ways we generate the electricity to power our lifestyles of today. 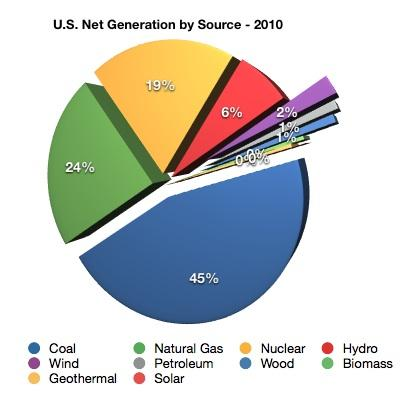 From a climate change point of view, the top two sources [coal and natural gas], providing almost 70% of our electricity needs, come from fossil fuels and are major sources of our GHG emissions.

We can get a better feeling for what this means when we look at the enormous number of Megawatt-hours of electricity generated over an eight month period. 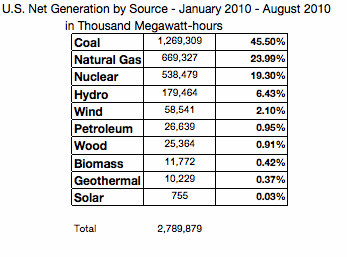 Excluding nuclear, when we add up the amount of electricity produced by non-carbon dioxide generating means, [Hydro, Wind, Geothermal and Solar], we get about 9% of the total.

But surprise, even without a national energy policy, many states and businesses are getting involved in the “green energy” revolution and these efforts are beginning to have an impact.

Today we will focus on just the wind energy component.

In 2000, the U.S. had a total installed capacity of 2,540 megawatts. This amount assumes that all of the wind turbines are operating under ideal wind conditions and are producing at their maximum rating.

Now fast forward to year end 2011. The U.S. then had 46,900 megawatts [equivalent to about 47 nuclear plants] of installed turbine capacity or about 19 times that of 2000! Recent information for 2012 suggests that we can expect another 10-20% increase in capacity again this year. The investment tax credits expire this year and it will be interesting to see what action Congress takes.

The “2011 …” map shows the locations of these wind installations by state. Texas is by far the leader with 10,377 megawatts installed. The 10 southeast states have negligible capacity. This data comes from the American Wind Energy Association and the U.S. Department of Energy. 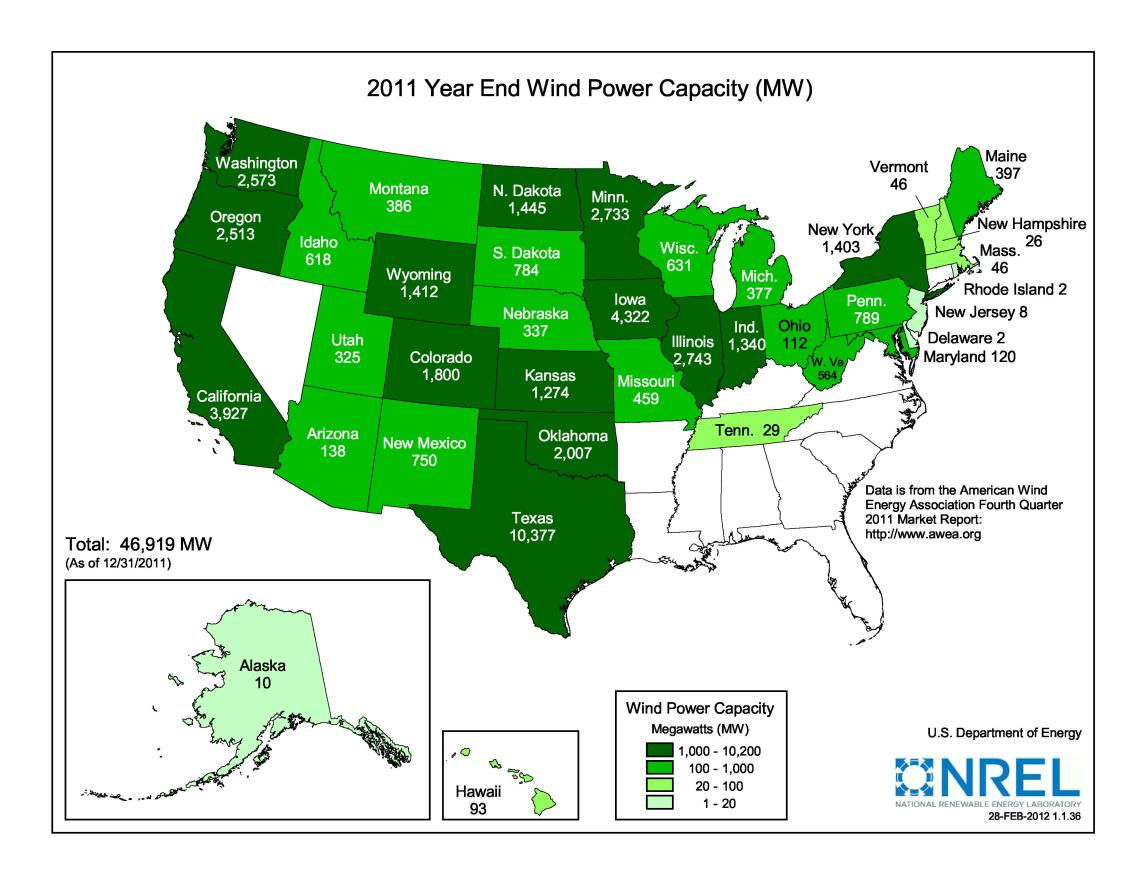 So what do all of these numbers, pie charts, graphs, and amounts of electricity mean?

What the data suggest is that a power revolution is beginning to take place without and regardless of recent Congressional actions.
The Republican Governor of Iowa, Terry Branstad, stated in a Wall Street Journal [5/15/12] article that wind energy is working well for Iowa. The state is now getting 20% of its power from 2,900 wind turbines and has attracted billions of dollars in private investment. There are over 215 wind-related businesses operating across the state providing jobs for more than 5,000 workers.

The Governor goes on to state, “[t]he wind-power industry is an American success story that is helping us build our manufacturing base , create jobs, lower energy costs and strengthen our energy security.”