And all the boards did shrink;

Nor any drop to drink”.

This short excerpt from Coleridge’s long poem, “The Rime of The Ancient Mariner,” evokes an image of the oceans that play such a central role in our planet’s weather and climate systems. Just consider the fact that they cover 70% of the Earth’s surface with an average depth of about two miles.

After many decades of researching the oceans, scientists are slowly gaining an understanding of this role. Wally Broecker, Professor of Earth and Environmental Sciences at Columbia University, developed the concept of ocean circulation called the Great Ocean Conveyor Belt [see his diagram]. His book with the same title makes fascinating reading. 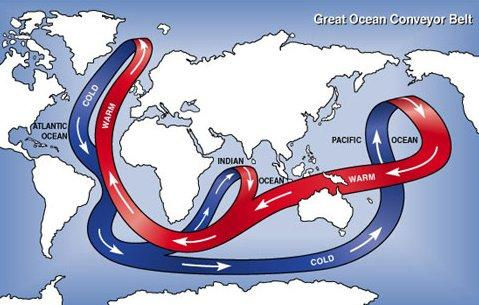 He demonstrated that there is a planet-wide circulation of water in the oceans that transports heat. The surface waters warm in the Pacific and continue on the surface to the North Atlantic. Giving up heat, as the water moves north, the surface waters cool and become dense; the cold water then descends to the depths.

This cold, barely above freezing, bottom water slowly moves south and east to the north Pacific again where it slowly warms, rises, and starts the whole process over.

This enormous moving stream of water plays a key role in transporting and storing heat energy. This includes absorbing the extra energy arising from the increased levels of greenhouse gases [GHG], primarily carbon dioxide, which is the primary GHG and comes from the consumption of fossil fuels.

We all know how much longer a large pot of water takes to heat than a small one. The same is true for the oceans. What is happening now is that this huge stream of water is beginning to warm; just a little.

While we can see the impacts of temperature increases on the land surface, high temperature records, melting of ice and extreme weather in all its forms, the total amount of energy involved here is modest.

The oceans however, with their huge surface area, depth and heat capacity, are absorbing most of this excess energy.

The graph titled “Earth’s Total Heat Content anomaly” [Journal of Geophysical Research, 114, 2009, Murphy et al.] illustrates where most of this heat, or energy, is going; i.e. the oceans.

Recognizing the importance of the oceans as a heat storage sink, recent research has focused on it. Since 2000, a project named ARGOS, has placed over 3000 special floats in the world’s oceans. They descend to depths of about 1 1/4 miles; slowly rising to the surface, taking measurements at regular intervals, then relaying water temperature and other data to satellites for collection and analysis. This process is repeated over and over again.

The picture emerging is that water temperatures are increasing all through the vertical water column, not just on the surface. The measurements show that increased energy, or heat from GHG, can be detected down to depths of over 6600 feet and accounts for ~90% of the extra energy.

The oceans role in absorbing the excess atmospheric carbon dioxide, the resulting increase in ocean acidity and impact on sea life, and water deoxygenation that changes fish stock distributions, are all part of a mosaic that needs much more understanding.

This discovery process is slow and expensive and scientists have just scratched the surface of our planet’s most unknown place. There is much more to learn.

Even with these efforts, other observations are appearing that are a bit disturbing and unexplained.

Electric power plants around the world require large volumes of water for cooling purposes. In the past few years coastal power plants in Ireland, Israel, and large nuclear facilities in Florida and on the west coast of Japan in 2011, had to reduce power output because the cooling water intake pipes became clogged with jellyfish. 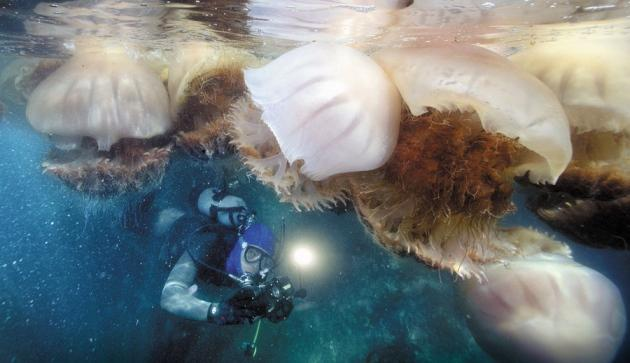 The situation in Japan was especially notable as seen in the underwater photo here. These giant Nomura jellyfish have a bell up to 6 feet in diameter with tentacles several yards long. They weigh up to 400 pounds and clog filters and the pipes required for cooling. They also wreck havoc with Japan’s fishing fleet’s nets. Are climate change and other human activities to ecosystems responsible for these population blooms? It is not known: yet. A new task force has been set up called JEDI, Jellyfish Database Initiative, to study these events.