Menu
You are here: Articles2014 ICSUSA ARTICLESMay 2014 - Megatons to Megawatts: all about energy, carbon dioxide emissions

Megatons to Megawatts: all about energy, carbon dioxide emissions

It was a little known program. The vessel, loaded with diluted weapons grade nuclear material from Russia, docked at a U.S. port at the end of 2013.

This was the last of 251 shipments.

But let’s back up a bit.

When the Soviet Union collapsed in the early ‘90s, there was a real danger that their huge stockpile of nuclear weapons might fall into the wrong hands. Enter Thomas Neff, a physicist at MIT.

He suggested that the U.S. buy the uranium after the weapon grade material was diluted from 90 percent to about 5 percent by the Russians. This uranium could then be used as fuel for electric utility nuclear reactors in the U.S. Thus was born the “Megatons to Megawatts” program (see circular emblem). 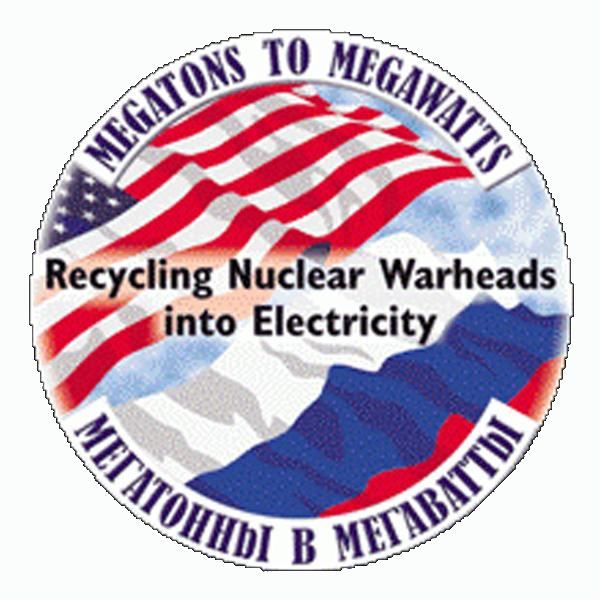 The unilateral arms reductions between Moscow and Washington left thousands of nuclear bombs in Russia’s poorly guarded bunkers. Under this program, about 20,000 Russian nuclear bombs were dismantled and processed and the fuel shipped to the U.S. The Russians needed cash, and America needed cheap power, and this $17 billion business arrangement was a win-win.

Enough energy was contained in these 15,432 tons of fissile material to provide electric power to all 20,000 cities and 115 million households in the U.S. for about two years (N.Y. Times, January 28, 2014).
600
One can get several levels of meaning from this program: a) the destruction of 20,000 nuclear warheads implies that a large number must remain, are still deployed and have enormous power for destruction; b) that this fuel came at a reasonable cost and helped stabilize bilateral relations; and c) the fact that 15,432 tons of nuclear material could provide all of the electrical energy needs for the United States for two years.

There is a direct and measurable heat energy connection between an atomic bomb explosion and the “heat” produced by elevated levels of carbon dioxide in our atmosphere.

These calculations show that the heat produced by four of these atomic bombs is being added to our atmosphere every second. Thus we are warming our planet by the equivalent of about 345,000 bombs per day. This is every day, every year and far into the future under current energy policies.

Ice core measurements dating back 800,000 years show that this current level of carbon dioxide concentration has never been seen during that extended time interval. Most of this increase is the result of the combustion of fossil fuels, deforestation and other land-use changes compared with the preindustrial level of about 280 ppm.

The “widget” here is a cellphone app that gives the number of atomic bomb heat equivalents accumulated in our atmosphere since 1998. 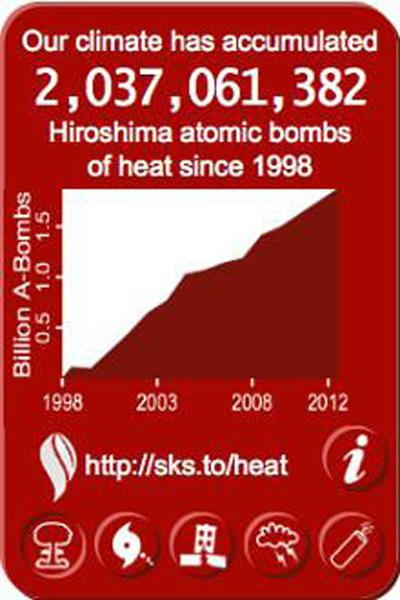 When activated, the numbers increase by four per second. It is free and can be accessed on the Internet at scienceblogs.com/gregladen/2013/11/25.

So, what is our energy mix?

First we have to recognize that we Americans consume enormous amounts of energy, far more than most other countries on Earth, on a per capita basis. While we may complain about other countries not doing their part to reduce emissions, let’s look at the illustration “Energy Use per Capita” by the World Bank: Kilograms of Oil Equivalent (2011). The data are compelling.

Next, in the illustration “U.S. Energy Consumption by Source” we can see how we have met out energy needs over the past 160 years. The three largest sources of our energy consumption come from “gas,” “oil” and “coal.” They provide most of the power in the U.S. “Wood/biofuels” met most of our energy needs from 1850 to 1890 when “coal” took over.

However, the “wind/ geothermal/solar” slice is beginning to creep into the mix. Adding in “hydro” and “nuclear” we now get about 17 percent of our energy from non-fossil carbon based fuels.

We have just begun this energy transition to renewables and have a long way to go.

The scientific career of Raymond N. Johnson, Ph.D., spanned 30 years in research and development as an organic/analytical chemist; he is currently founder and director of the Institute of Climate Studies USA (www.ICSUSA.org).